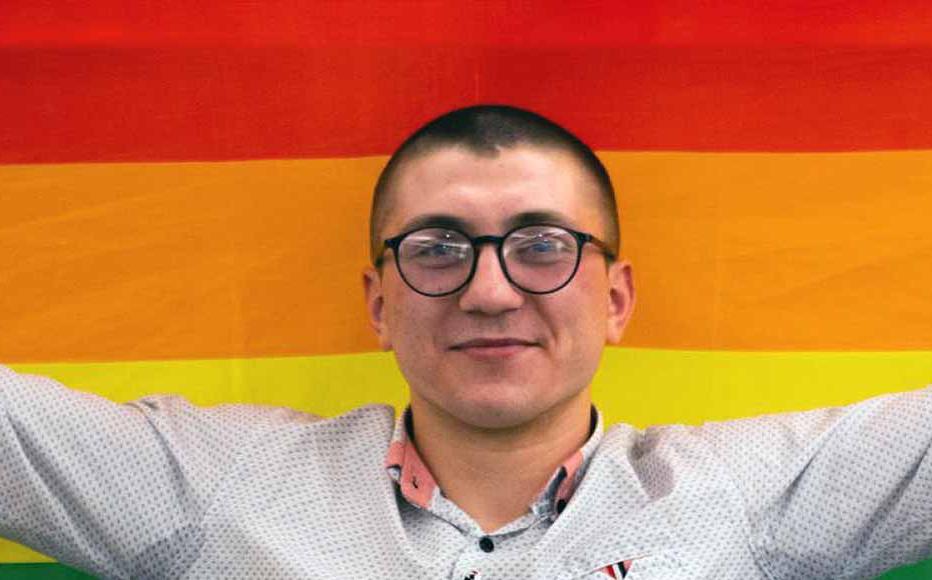 Marin Pavlescu, 19, left his mandatory military service as he denounced that he was harassed because of his homosexuality, sparking a debate about the army and LGBT rights in Moldova. © Marin Pavlescu
The link has been copied

When recently enlisted army conscript Marin Pavlescu borrowed a superior officer’s phone to call his boyfriend one day last spring, he had no idea that their conversation had been recorded.

When this recording was then shared with other officers and soldiers – without his consent -   he was met with an influx of abuse and harassment. The case sparked a wider debate about desertion and discrimination against the LGBT community in the army and across Moldova.

"Hate messages started flooding my phone. I received calls from unknown numbers, strangers who were telling me what they thought I was - a coward, at best... I feel bad, I have trouble sleeping,” Pavlescu told IWPR.

"I deserve respect and a chance for happiness.”

Overwhelmed, the now 19-year-old filed for leave to take care of his ailing mother. Once out, he realised he could not return.

"I even thought of suicide... It is very difficult to get through the physical and psychological pressure there. I decided I needed to find a way out of the situation, but I knew for sure that I would not return,” he recalls.

On November 10, 2021, the date he was supposed to report back to his unit, he came out publicly, denounced the harassment he was subjected to and announced he would not return to his brigade, the Number Two Stefan Cel Mare Motorised Infantry in the capital Chisinau.

Although interrupting his one-year mandatory military service would amount to desertion, which is punishable with up to 47,500 Moldovan Lei (2,645 US dollars) or up to five years in prison, it was a risk he was willing to take.

"I take responsibility for the possible punishment, including imprisonment, if the judge deems it necessary to apply it to me,” he said in a video posted on Instagram. "I deserve, first of all, respect and a chance for happiness.”

Pavlescu said that ever since he had enlisted in April 2021, he had “struggled to cope with the degrading and humiliating treatment I was subjected to on a daily basis”.

The criminal code indicates that soldiers deserting are exempt from criminal liability if the action took place due to serious circumstances. According to Pavlescu’s lawyer, Doina Ioana Straisteanu, there have been no precedents in a case such as this.

Pavlescu’s experience sparked a debate about Moldova’s attitude towards homosexuality, with even President Maia Sandu - who, as head of state, is also commander-in-chief of the army- intervening to warn that "such discriminatory behaviour is unacceptable”.

"We respect the rights of all citizens and we must ensure that all state institutions respect these rights and do not allow these abuses," the president stated.

Homosexuality is legal in Moldova, but surveys show that LGBT people continue to face discrimination from the authorities, the wider society and their own families.

In 2021, advocacy group ILGA-Europe ranked Moldova 38th out of 49 European countries for its respect for LGBT rights.

"People in the community often ask for our help when their parents beat them, harass them, force them to go into psychiatric care, kick them out of the house, deprive them of their phone or contact with friends and the world around them,” said Angelica Frolov, coordinator at Genderdoc-M Center, the country’s only LGBT-support organisation, which also provided Pavlescu with legal and psychological assistance. "We had cases like that of a young woman who was tied to the radiator at home and another whose brother broke her finger after finding out she was a lesbian.”

After the country adopted an anti-discrimination bill in 2012, various cities across the country enacted bans on so-called propaganda related to homosexuality.

Although some have since been retracted, these measures reflect a wider rancour among some sections of the political class. politicians. In 2017 Sandu’s predecessor, pro-Russian politician Igor Dodon publicly opposed an LGBT rally and remarked "I am not the president of the gays”.

The situation in what Frolov called "closed systems,” such as the army or prisons, remains extremely concerning.

"We had cases of transgender women called up to the army and they didn't know what to do. And there are LGBT people who are not soldiers, but work in the army and hide their identity, doing their best not to let anyone know. They lead a double life in order to protect themselves,” Frolov explained.

In 2020 the ministry of defence adopted new rules to prevent, identify and report cases of discrimination, sexual harassment and gender-based violence. Rights groups, however, maintain that these tools remain largely ineffective.

Pavlescu’s lawyer Straisteanu was notified that the army’s internal investigation did not find evidence of intimidation, humiliation or discriminatory actions against him on the grounds of his sexual orientation. His desertion case is still being evaluated.

The case also reached Moldova’s council for the prevention and elimination of discrimination, which heard testimony from both Pavlescu and army representatives. During the hearing, ministry of defence representatives reportedly asked for an assessment to prove the soldier was indeed homosexual.

“The authorities did not handle the situation well, including the communication aspect to understand what happened and what will be done in the future to prevent [similar cases],” human rights lawyer Vadim Vieru told IWPR.

Frolov explained that the Moldovan army, with a core service of about 5,100 people, remained poorly funded with harsh living conditions. Accusations of harassment, ill-treatment and even violence were commonplace. In 2021, 43 soldiers left their military units.

Amid the storm his coming out created, Pavlescu continues to struggle to put his life back together. His mother and two brothers no longer speak to him and the relationship with his partner also ended. Finding work is difficult.

“An employer said that I could not work there, because I am a deserter and they do not want problems with the police,' he continued, adding “My friends are just a few Genderdoc-M workers. When I feel very bad, I go out alone in the evening and walk with my headphones on.