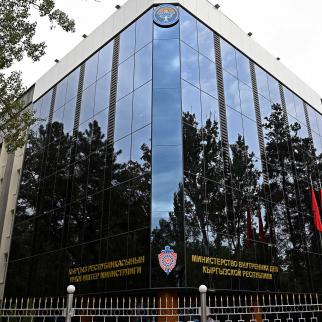 Headquarters of the Kyrgyz Ministry of Internal Affairs. © president.kg

Warnings that the covert surveillance amounted to a gross violation of the fundamental right to privacy.

Last year, Kyrgyz journalist Ablai (not his real name) was hired by a parliamentary candidate, five days before the November 2021 elections, to help promote his campaign on social media.

“Every day, according to the agreement, we had to publish three posts and share them to at least 20 or 30 groups,” he recalled. “I was paid 1,500 som for that (19 US dollars) daily. It was mandatory to publish either a photo or a video of the candidate under every post. We made a screenshot of every post as evidence and sent it to the group administrator.”

For further credibility, all those recruited to contribute used their real names and were asked to write creative posts that reflected their own identity.

“I was offered to promote another party, but I refused because the other candidate was not a good person, in my opinion,” Ablai said. “If I agreed, I would have compromised my reputation.”

Social media manipulation, whether via so-called bot or troll farms or organised online campaigns, have become increasingly popular in recent years in Kyrgyzstan.

“Analysis of our investigations shows that their number is increasing every year,” she continued. “The so-called bot farms become active during elections, which we have had many of in recent years. It happens despite the fact that Facebook constantly blocks such accounts after complaints. After the October 2020 election, Facebook deleted a few hundred accounts, groups and pages - but in January and February [2022] we noticed that new accounts were created because the election to the Bishkek City [council] was to be held in April 2021.”

She said that public relations companies offered complete packages which included promotion via fake accounts on social media or even staged online attacks on rivals.

Factcheck.kg journalists recently analysed 600 Facebook accounts that posted supportive content about six out of the 25 that took part in the 2020 election. They calculated the amount of original content as opposed to reposts, and genuine photos. According to the results, around 75 per cent of Yntymak party supporters were fake, as were more than half of Emgek supporters. Almost half of the supporters of the NDPK party were fake.

According to Torekul (not his real name), who worked for one of pro-government parties during the 2020 election, fake accounts have been widely used since 2018 as a way to exert influence. These were usually opened via a SIM card or e-mail, and by using cloned photos and personal data.

“It doesn’t matter as everyone has a mobile phone now,” Torekul said. “There’s the Facebook Lite app that provides access to a few accounts at the same time. It’s not difficult.  You can do it via Yandex, Opera, Google on one computer… a user could earn more than 500 dollars running a few accounts… Some were hired for a week, a month, others were hired for a long time. According to the assignment, one had to make, for example, 200 comments, 300 reposts. And screenshots confirming this should then be sent to your supervisors. It’s a lot of work.”

According to Torekul, the peak of activity came in autumn 2019 after a journalistic investigation of corruption against the deputy chair of the state customs service, Raim Matraimov.

He noted that more money was paid for work that involved no factchecking or ethical considerations, adding, “It was a unique chance for journalists; those who could, they used it.”

However, Torekul said that growing digital literacy meant that such campaigns no longer had such a significant impact.

“It used to be relevant [if there were] 200-300 comments under a post, but now quality matters,” Torekul said. “Society knows what a fake or a troll is. If an account does not have a photo or is named [something generic like] Georgy Kyrgyz, they know it’s not a real person, so they don’t trust their words. People now understand if that’s a bot, a troll or a real person.”

In February, the information service of the president’s office initiated an unprecedented project to train heads of municipal bodies and press secretaries across the country in effective communication. The media literacy trainings were funded by USAID.

“We are also planning to hold a range of events to unite media groups and organisations to improve interaction and awareness-raising about what the state does for its citizens,” the information policy service said in a statement.

According to media expert Kubanychbek Taabaldiev, ex-director of the KABAR state news agency, the initiative signalled a growing awareness of the importance of social media and public opinion in shaping politics.

“All press services and municipal chiefs have been tasked with working more actively on raising awareness about the work of state bodies,” Taabaldiev said.

“Nearly 90 state institutions and agencies are involved in this work. In addition to press services, heads of departments and mid-level executives are also involved. In other words, a large layer of people who can work with social media can virtually fill all the information space with the information that needs to be distributed.”

The official aim is to ensure state bodies achieve the same level of responsiveness as commercial companies that maintain good public relations.

However, Sooronbaeva said that she suspected that these resources were also being used more to amplify the achievements of senior executives.

“There’s the impression that state bodies started working in this direction to artificially hype and create a positive image."

Ultimately, she continued, journalists had restricted resources to monitor fake information in the media space. Sooronbaeva said that only four people, including herself, worked full time for Factcheck.