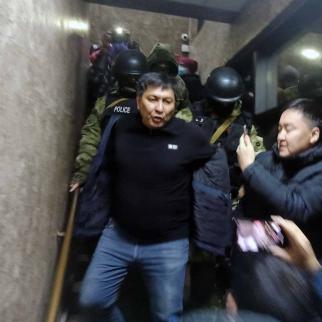 Prominent Kyrgyz investigative journalist Bolot Temirov as he was arrested in the office of the outlet he founded, Terminov Live, on January 22. © Kloop.kg 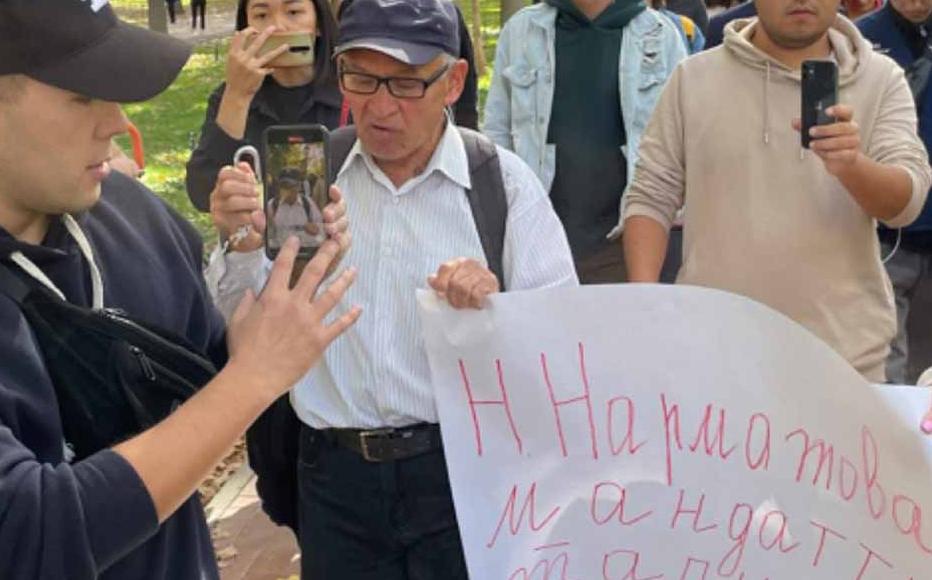 Participants of the free speech rally in Bishkek. © 24.kg 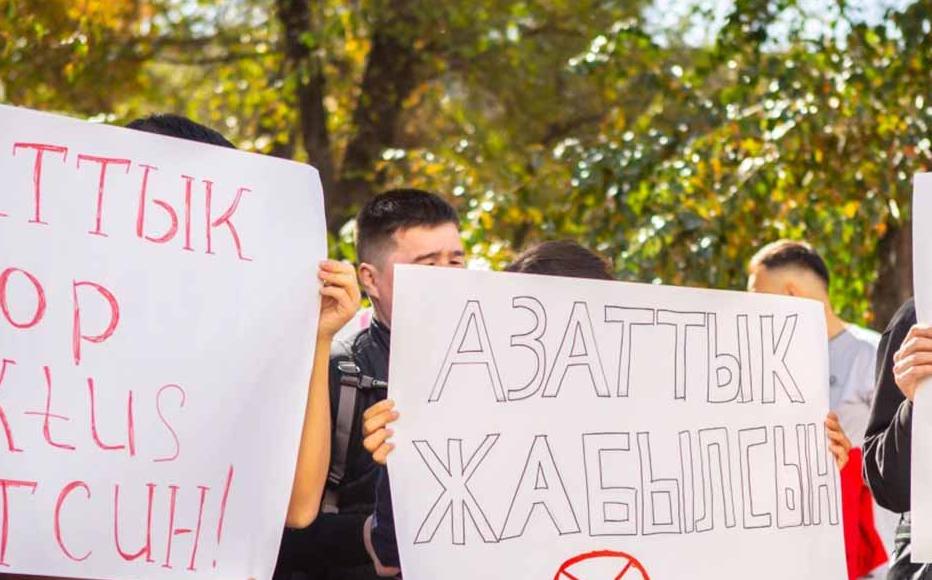 Participants of the rally in front of the Radio Azattyk office. © RFE/RL
The link has been copied

Concerns are growing in Kyrgyzstan that a new draft media law will seriously hamper independent media’s freedom of speech.

The proposed legislation, published on September 28, states it will enable the government to “restrict freedom of speech, freedom of the press and other media in a state of emergency and war according to the constitutional law”.

The draft also introduces other restrictions, prompted, according to the authors, by the “urgent need” to bring existing media law in line with the constitution adopted in April 2021.

Double the length of the current law, the official explanation for the proposal was that a new document was needed due to “the obsolescence” of the existing law from 1992.

This has surprised experts as in 2021, President Sadyr Zhaparov ordered a review into the 359 laws, including on mass media.

According to the Institute of Media Policy, following a six-month study, the ministry of justice had announced that the law met all necessary requirements and there was no need to amend it.

“We were baffled,” said Nurbek Sydykov, an Institute of Media Policy lawyer. “No journalist, nor anyone from the sector, was invited to amend the law on the media sphere. The law emerged from nowhere and we can see that it was drafted by people who are unfamiliar with the specifics of journalism.”

Institute of Media Policy lawyers believe that the suggested amendments were copied from a similar law in Russia, but go even further, for instance in banning hidden recording.

“It is allowed under the Russian law in certain cases, when it is done in the public interest, or if it does not violate anyone’s constitutional rights. In our draft law, it is prohibited in any circumstances, even for national security purposes,” Sydykov said.

An analysis by the Adilet Legal Clinic laid out numerous ways in which this new law would shrink the freedom of Kyrgyzstan’s media space.

“It suggests introducing a wide range of various reasons and requirements that contain rather vague wording of restrictions and prohibitions, the failure to comply with which could lead to liquidation of a media outlet,” the document read. “Procedures of media outlet registration become considerably complex, and media outlets shall be considered as online outlets as well, ie websites,” according to the analysis.

In addition, the new draft law bans non-Kyrgyz citizens – and organisations 50 per cent owned by foreigners - from launching media outlets in Kyrgyzstan.

All media outlets need re-register by June 1, 2023 or face liquidation. As part of this re-registration, outlets must provide not only information about its founders and their business interests, but also its funding sources.

An unregistered foreign outlet or one receiving outside will now have to obtain a special permit, although the draft bill does not specify the criteria for such accreditation.

“Thus, after the law comes into force, citizens of Kyrgyzstan would have access only to those foreign media outlets, which are permitted to work in our country by the cabinet of ministers,” the Adilet Legal Clinic analysis read.

While the draft law proposes giving websites the status of media outlets, it fails to fully define this category.

“We have a requirement for mandatory registration of all websites, but there is no information about what web pages or websites must be registered,” Sydykov said. “So this requirement seems to refer not only to online media who publish news content. And there are a lot of them.”

“For example, the Russian legislation reads that if anyone has a certain number of followers, they can be considered as a media outlet, and our law does not have it,” said Cholpon Dzhakupova, head of the Adilet Legal Clinic. “The law must be drafted so that it cannot be interpreted on one’s own. There should be no such thing as one’s own decision. Criteria must be precise.”

Media expert Omurbek Sataev warned that the intention to consider websites and bloggers media outlets was an attempt to introduce censorship.

“This law would be used as a tool,” he continued. “We have so many laws regulating media activities, and it makes no sense to introduce additional restrictions. That’s why many journalists, social activists and human rights defenders see the threat in it. These amendments would only aggravate the situation of the freedom of speech in the country.”

Lawyers are particularly concerned about a prohibition of the “distribution of some categories of information not only in the media, but also in information and telecommunication networks”. This implies state regulation not only of online news outlets, but also of all other sources including social media and messengers.

Experts have warned that the space for free expression in Kyrgyzstan has shrunk since Zhaparov came to power in October 2020.

Most recently, the ministry of culture this week blocked RFE/RL’s Azattyk website for two months after the outlet refused to remove coverage of the conflict on the Kyrgyz-Tajik border.

According to the PolitKlinika NGO, 13 criminal cases were initiated against journalists and media outlets in 2010 to 2022 - over half in the last two years.

In January 2022, police attempted to detain investigative journalist Bolot Temirov and he was later charged with offences including forgery and illegally crossing the border.

After a public outcry, he was acquitted in September 2022.

The director of Next TV Taalai Duishembiev was also detained and held in custody for seven months before receiving a five year suspended sentence.

“His lawyer will surely appeal the decision,” Sataev said “Although the sentence is suspended and he was released to reduce public tension, the fact remains [that he was convicted]. I think it was done to make other journalists think seriously.”