Politicians urged to watch their language and curb unruly supporters.

Politicians urged to watch their language and curb unruly supporters. 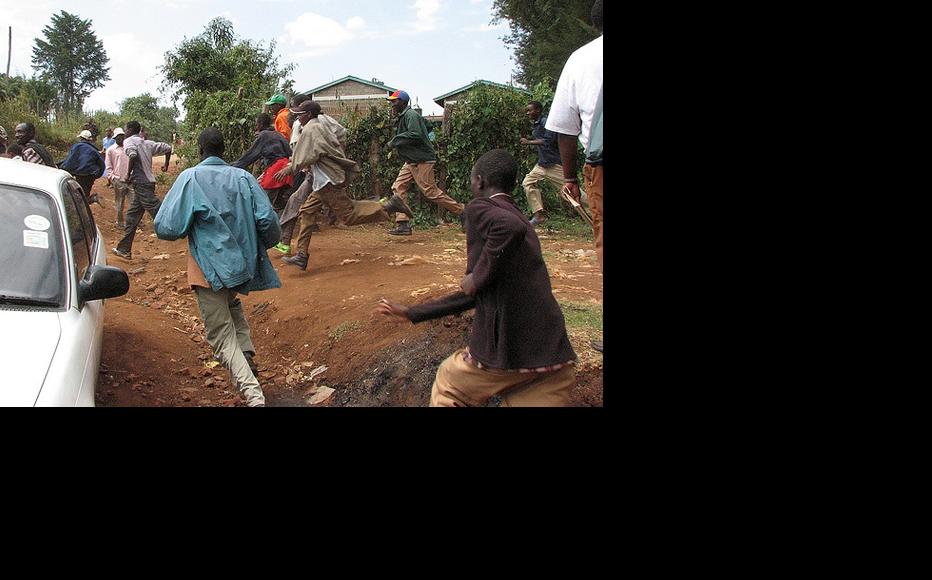 Spectators run to join a political rally ahead of a general election in 2007. (Photo: Micro Kid/Flickr)
The link has been copied

The head of Kenya’s truth commission has warned that clashes between supporters of rival political groups could escalate into widespread, serious unrest if left unchecked.

Civil society groups, too, are calling on political leaders to work with community elders who might be able to play a mediating role, curb incitement to violence, and encourage greater political tolerance.

Bethwel Kiplagat, chairman of the Truth, Justice and Reconciliation Commission (TJRC) told IWPR that he was “deeply concerned” by skirmishes that have broken out at political events across the country over the last few weeks.

“Whatever is happening is worrying, and if we leave it we may pay a heavy price,” he said in an interview in Nairobi.

The TJRC was set up in 2008 after widespread political and ethnic violence – sparked by a disputed presidential election result in December 2007 – led to the death of more than 1,100 people.

Kenyan president Uhuru Kenyatta and his deputy William Ruto have been charged at the International Criminal Court in The Hague for orchestrating the bloodshed.

Through September and October, Kenya has witnessed a series of clashes between supporters of the Coalition for Reforms and Democracy (CORD) and President Kenyatta’s ruling Jubilee coalition.

Tensions between the two gathered force as CORD leader Raila Odinga, a former prime minister, campaigns for a national referendum on amending the 2010 constitution. The proposed changes would cover such issues as electoral reform, the security situation, and local government.

The Jubilee government is vehemently opposed to the referendum plan.

The high-level political stand-off has made itself felt at grassroots level, with fighting between supporters of the two factions.

On September 8, a crowd of young men disrupted a presidential function that was taking place in Nyanza, an opposition stronghold in western Kenya. They threw chairs and shoes at the stage where Kenyatta was sitting, forcing the event to be cut short.

Two weeks later, on September 22, pro- and anti-referendum supporters clashed during a political meeting in the Rift Valley. Scores of people were injured, including a senior county official.

The following day, at least six people were shot and injured in a clash between Jubiliee and CORD supporters in Makueni County in eastern Kenya.

Civil society groups are urging politicians to refrain from using inflammatory language, arguing that this kind of rhetoric encourages people to attack their opponents.

“When you look at the political terrain, it’s not the citizens who fight each other, it’s the politicians,” Betty Okero of the Civil Society Network in the western of town of Kisumu said. “The citizens only rise to fight on behalf of their respective leaders. Therefore, to fight intolerance, it has to start with our leaders.”

Some officials like Alfred Mutua, governor of Machokos County, have hinted that politicians have deliberately incited their supporters to violence.

"There is too much destabilising politics that appears well coordinated,” he said in a social media post after the recent clashes. “We need to ask ourselves who are behind [it] all.”

Kiplagat has called on community elders to use traditional methods of resolving disputes in order to “bring warring political groups together”. NGOs agree that this is worth doing, as does the national body representing local elders.

Ndungu Gaithoma, coordinator of the Kenya National Council of Elders, said its members were working with local political factions to try to build a more cohesive society.

“Politicians will never agree on certain issues, they are always inciting and telling [lies] but as elders – custodians of various communities – we have ongoing dialogue,” Gaithoma told IWPR. “As elders, our role is to bring opposing parties together. We are acting as the bridge between them [local opposing factions] in order to realise national cohesion and integration.”

In his IWPR interview, Kiplagat also addressed one of CORD’s key demands – fixing problems with the process of devolution set out in the constitution. Many powers have already been passed from central government to the 47 counties, but there has been considerable confusion and disagreement about who exactly is responsible for what. (See Kenya’s Devolution Squabbles.)

In Kiplagat’s view, such problems cannot be fixed just by changing the constitution. Rather, he says, the relevant constitutional provisions have been put into practice too slowly. This has fed mistrust in the process, and that in turn has made it difficult to achieve progress.

“The present political unease has its roots in the way we are slowly implementing the constitution,” he said. “There is a need for a smooth working relationship between the three arms of the government towards the common goal of peace and security.”

Robert Wanjala is a freelance reporter in Kenya.