Calls for new county chiefs to be given more powers over police.

Calls for new county chiefs to be given more powers over police. 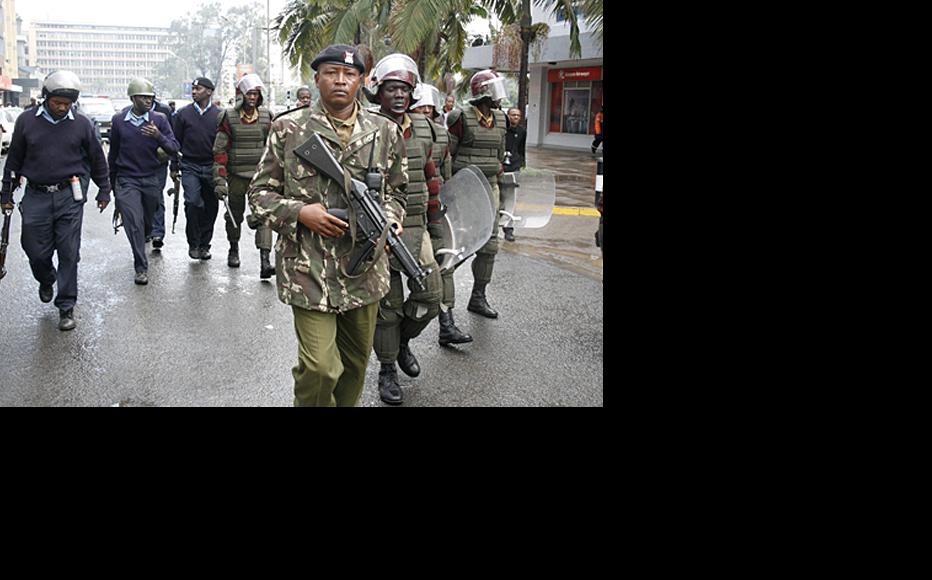 Police in Nairobi in early 2008, during the violence that rocked Kenya after a presidential election. (Photo: DEMOSH/Flickr)
The link has been copied

Recent gang attacks in western and northeastern Kenya have led to demands for the country’s new county governors to be given a greater role in maintaining security.

If governors were made responsible for maintaining security in their county, they might have powers to deploy police on the ground without first seeking permission from the force’s central command in the capital Nairobi.

By the end of May, more than 20 people including three police officers had been killed and 200 injured in brutal mob attacks in Bungoma and Busia counties in the west of Kenya. Some of the victims were left permanently blind.

Frustrated by the slow response from police, some residents of Bungoma formed vigilante groups to protect their property and loved ones.

According to Moses Wetangula, a member of the Kenyan Senate from the area, 600 people have been arrested in connection with the attacks in Bungoma and Busia.

A further 22 people were reported killed in similar attacks in Mandera county in the northeast on June 22 and 23.

The violence comes at a time when a new devolved system of government is taking shape in Kenya, with the aim of transferring powers from national to county level. The county governors, elected in March, are part of the new structure.

Kenya’s national police force currently operates under a single command structure headed by the inspector-general in Nairobi. County governors therefore have no authority to call out the police when violence flares up. Their remit is limited to chairing the county policing authority, a local body which monitors security threats but has no direct powers to deploy forces.

Speaking after the attacks in Bungoma in May, county governor Kenneth Lusaka told IWPR, “If I had the powers over security, the response would have been swift and we would have saved more lives and property.”

Lusaka believes that locally-elected representatives are in a better position to handle security matters than the inspector-general of police in Nairobi.

The county policing authority, he said, was “merely an oversight body”, and genuine decision-making was hampered by its broad range of members, from the general public to NGOs and community organisations.

Senate member Catherine Mukiite is in favour of granting governors more powers over the police.

“Devolution functions seem not to have taken place,” she said. “When the security team was sent from Nairobi [after the attacks], the Bungoma governor was not allowed to attend the security meeting.”

The county governors’ role is further confused by the continuing presence of county commissioners who are not elected, but appointed by and answerable to the president.

These commissioners exist to implement the functions of national government at county level. That includes security, so the commissioners chair the county security committee, a separate body from the county policing authority. They have powers to order a police deployment, in consultation with the force’s national command.

The county governors, meanwhile, do not sit on the security committee.

Governors are democratically elected to run their county yet, in effect, county commissioners can go over their head or not consult them on security matters. Mukiite believes this undermines their authority.

“One wonders who is in charge,” she said. “I believe the response [to the Busia and Bungoma] killings would have been faster if the police were to answer to the governors.”

County commissioners were declared unconstitutional by a high court ruling last year. But on June 14 this year, that decision was overturned by Kenya’s Court of Appeal, and the commissioners were officially reinstated, although they never actually left their posts.

Governors have criticised the position of county commissioner, since it is accountable to central government rather than to them. Several of them even threatened to boycott celebrations of Kenya’s home rule anniversary on June 1 unless the blurred responsibilities between them and the county commissioners were resolved.

The question of what security powers the governors should have was hotly debated when devolution legislation – the National Coordination Act and the National Police Service Act in particular – were drawn up in 2011.

Mukiite argues that keeping security in the hands of central government has left the new governors in an invidious position, since it makes them look like “mere figureheads”.

“The voters do not want the governor to pass the buck, yet the same governors have no powers,” Mukiite said.
“The people are wondering what the [role of the] governor whom they elected is.”

COULD DEVOLVED SECURITY POWERS BE MISUSED?

The idea that county governors should control policing does not have universal support. Its opponents cite reasons ranging from the risk of confusing the lines of command to the danger that the police might end up being used to settle local scores. Others say it is too early to make changes to a structure that was laid out only recently, by the 2010 constitution.

Simiyu Werunga, director of the African Centre for Security and Strategic Studies, argues that if governors had more authority over the police, this might create a command structure operating in parallel with the police force’s own hierarchy. The result could be blurred lines of command and lack of accountability.

“If we give the security role to the governor, we shall be decentralising the command structure, which is not good and could compromise the very security we envisage to keep,” Werunga said. Our system is not a federal system. We only have devolved functions. If we had a federal system like Nigeria or the US, then the governors and mayors would be in charge,” he said.

There is also an argument that national government should not cede its core function – maintaining domestic security – to any lower institution.

Stephen Mutoro, chairman of the Decentralisation and Governance Non-State Actors’ Network, said while devolving other functions was beneficial, security must be controlled from the centre.

He warned that security could be at risk from devolved control, particularly when local elections were held.

“Governors themselves could be the problem and if this happens, say, in a county of two rival communities, I don’t see the possibility of the governor deploying the security to arrest the situation, especially if members of his ethnic group are the aggressors,” Mutoro said.

Others dispute such arguments. George Musamali, a security analyst and retired military officer, believes governors should play a more prominent role in security matters and have powers to deploy the police as a matter of democratic principle.

“These governors were voted for across the board, even in counties where there are communities perceived to be rivals,” Musamali said. “Therefore claims that the governors could support one side are mere excuses to exclude them from security committees.”

Bryan Kahumbura, an analyst with the International Crisis Group in Nairobi said it was “concerning” that the question over the governors’ roles and responsibilities was being raised, since these should have been clearly articulated and understood prior to their election.

He says the constitution allows control over security to be devolved to governors, and decisions to do so could by made on a county-by-county basis as the need arises. At the same time, while the idea of giving governors more powers over the police has merit, Kahumbura said it might be a little premature to do so right now.

“It wouldn't be helpful at this stage,” he told IWPR. “In theory they [governors], being the CEO of the county, should have such powers, but as it's a transition [period] and overall security control and instruction comes from central government, it could potentially be counter-productive in the short term.”

Walter Menya is a reporter for The Sunday Nation Newspaper in Nairobi.

This article was produced as part of a media development programme by IWPR and Wayamo Communication Foundation in partnership with The Star.