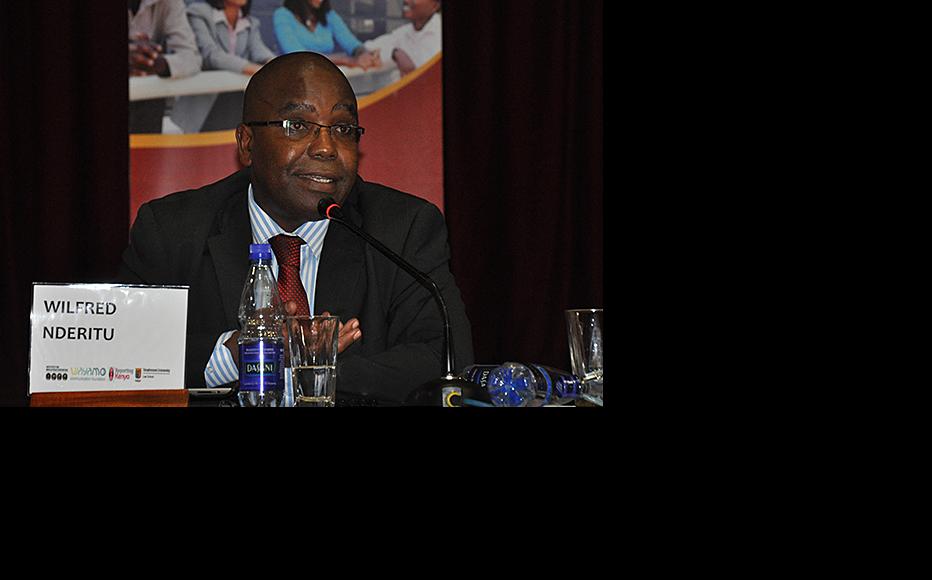 Wilfred Nderitu, the ICC legal representative for victims, speaking at IWPR&#039;s seminar in Nairobi on May 24. (Photo: Muthoni Njuki)
The link has been copied

Three months before Kenya’s deputy president is due to go on trial at the International Criminal Court in The Hague, 93 victims of violence that followed a disputed election in late 2007 have pulled out of the proceedings.

In a letter dated June 5, the 93 victims informed the court that they did not support the prosecution of Kenya’s newly elected president, Uhuru Kenyatta, and his deputy William Ruto, both of whom stand accused of orchestrating the bloodshed.

“[We] wish to withdraw from the case and [ICC] processes with immediate effect since we are no longer confident that the process which is going on at the court is beneficial to our interests,’’ the letter read.

Kenyatta and Ruto were elected in a presidential election held in early March.

In two separate cases known as Kenya 1 and Kenya 2, they are charged with planning attacks across political and ethnic lines in the aftermath of the poll in December 2007. Former radio broadcaster, Joshua Arap Sang, is charged in the same case as Ruto.

The 93 victims are mainly people who lost relatives or were forced to flee their homes during the unrest. More than 1,100 people died and approximately 650,000 were displaced during months of violence.

It was not clear whether the 93 were due to appear in one or both of the cases, under the ICC’s victim participation scheme.

The trial of Ruto and Sang is set to start on September 10. Kenyatta’s trial currently has a start date of July 9, but this is likely to be delayed as his lawyers have asked judges to stay the case until January 2014.

The victims’ letter was addressed to the ICC’s "victims and witness office" in The Hague.

In an email to IWPR, the ICC said it had received “a letter alleging the withdrawal of 93 victims from ICC proceedings in the Kenyan cases”. The court declined to comment on the authenticity of the letter, but said further court procedures were necessary before the victims’ names could be withdrawn.

Any such withdrawal would have “no consequences” on the trial or on the participation of any other victims in the two cases, the court’s statement said.

The main burden of proving the charges against the suspects rests with the prosecutor. The role of the victims, through their legal representative, is to provide supplementary arguments and help give judges a sense of the context in which the crimes occurred.

Registered victims could also be entitled to compensation if the suspects are ultimately convicted.

“Victim participation is an important part of the system at the ICC, and victims do make important contributions to proceedings when they put forward their views and concerns,” Elizabeth Evenson, senior counsel for the advocacy group, Human Rights Watch, said. “But ultimately a trial will turn, at least primarily, on the strength of the evidence put forward by the prosecution.”

Faced with sustained criticism of the court’s investigation in Kenya, Prosecutor Fatou Bensouda has repeatedly stated that her work is focused on bringing justice to the victims of the conflict of late 2007 and early 2008.

The withdrawal of such a large number of victims would therefore come as a huge blow to the court.

Kenyatta and Ruto, who were on opposite sides in the conflict, have insisted that the warring factions have now reconciled under their leadership. Supporters of the new leaders argue that the ICC trials will undermine efforts to achieve lasting peace in Kenya – a claim likely to be bolstered by victims pulling out.

"Any such withdrawal [of the victims] puts to question the credibility of the court and the office of the prosecutor,” Moses Chelang'a, a lawyer in Nairobi, told IWPR.

In total, 233 people had been authorised by the ICC’s judges to participate as victims in proceedings against Kenyatta. A further 327 had been included in the Ruto and Sang case.

Wilfred Nderitu, the ICC’s legal representative of victims in Kenya, told IWPR that he had seen the letter, but he would not comment further except to say that the cases would continue.

The withdrawal of the victims comes days after judges lent their support to a proposal to hold parts of the Ruto and Sang trial outside The Hague. Judges acknowledged the benefits to victims of hearing the cases closer to home, and are open to suggestions of hosting portions of the proceedings either in the Tanzanian town of Arusha or in Kenya itself.

The Arusha idea had previously been welcomed by the victims’ representative, Nderitu.

“Arusha is a better option for all victims who would have liked to attend the hearings and cannot make it to The Hague,” he said earlier this week.

Although Bensouda has often stated that the victims are at the core of her work, the 93 victims stated in their letter that they did not believe she had their interests at heart.

“We started sensing that the office of the prosecutor was not after our welfare and was more interested in the two Kenya cases, and that we were just being used as stepping stones,” the letter read.

The victims went on to explain that none of them had met the ICC’s former prosecutor, Luis Moreno Ocampo, who initiated the court’s investigation in Kenya in 2010.

The victims also accused the previous legal representative who acted for them earlier on in the case of failing to take on board their concerns and their understanding of how the violence unfolded. They said they had made these matters clear in a meeting with Sureta Chana on October 18, 2011.

The victims disputed the prosecutor’s understanding of events and claimed that the 2007-08 attacks were “spontaneous”.

They also disputed the charge that the three ICC suspects were behind the violence.

“The victims blamed the attacks on people other than the accused persons, [on those] who called for mass action, calling on Kenyans to take to the streets which resulted into criminal elements, looting, raping, killing and destroying property,” the letter said.

The victims also took issue with recent statements made by the prosecutor about the Kenyan government’s failure to fully cooperate with her investigations.

They concluded by urging the ICC to remove their names from the list of victims, “since we do not want to claim for compensation from people we don’t have any complaint against”.

Bernard Momanyi is a reporter for ReportingKenya.net and News Editor at Capital FM in Nairobi. Simon Jennings, IWPR’s Africa Editor, also contributed to this report.