News outlets argue they wanted to avoid providing a platform for possible incitement.

News outlets argue they wanted to avoid providing a platform for possible incitement. 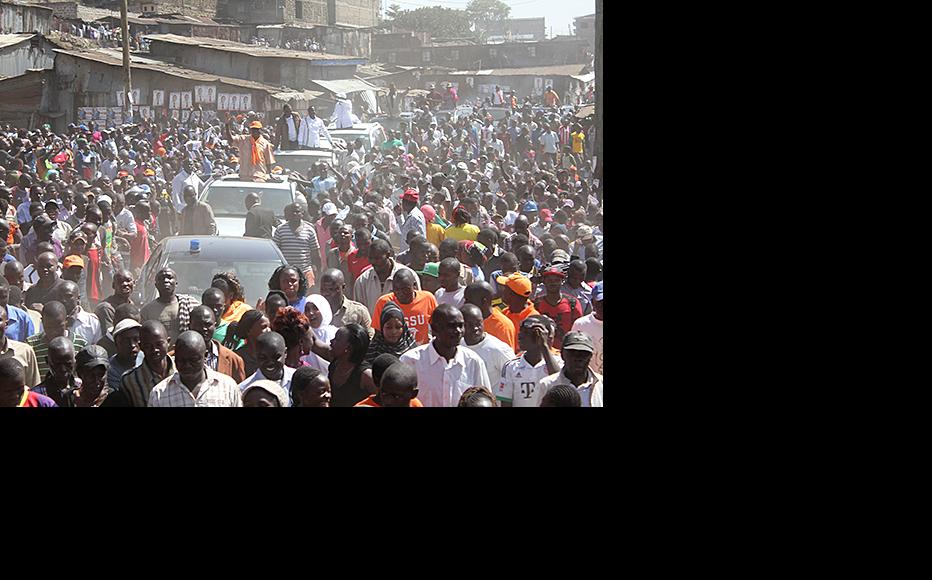 CORD supporters gather at a by-election rally in Nairobi on July 29, 2014. (Photo: Capital FM)
The link has been copied

A decision by Kenya’s main broadcasters not to air live coverage of a recent opposition rally has highlighted a dilemma facing the media. Some commentators warn that excessive caution about broadcasting inflammatory material could stifle much-needed debate.

The opposition Coalition for Reforms and Democracy (CORD), led by former prime minister Raila Odinga, held a mass rally earlier this month following a series of attacks which killed more than 90 people across the country.

The rally in Nairobi’s Uhuru Park was billed as an opportunity to discuss serious concerns about security and other challenges facing the government. The chosen date, July 7, is known as Saba Saba (“seven seven”) Day, in reference to demonstrations held that day in 1990 in support of multi-party elections.

Over the last year, the Somali Islamist group al-Shabab has attacked a number of targets in Kenya, including the September 2013 assault on a Nairobi shopping mall that killed 67 people and injured more than 200.

On June 15 and 16, armed men attacked the towns of Mpeketoni and Maporomoko in Lamu County, killing at least 65 people.

Al-Shabab claimed responsibility for those attacks, and representatives of the international community, including the United States embassy in Nairobi, also believe the group is responsible.

Given the intensive media coverage of the attacks and the heated political debate that ensued, Kenyans were expecting to watch the CORD rally live on television. A similar rally, held at the same venue in May after Odinga returned to Kenya from the United States, was aired live on five channels, including the government broadcaster.

But ahead of the July 7 event, editors of the principal TV channels – Nation Television (NTV), Kenya Television Network (KTN), K24 and Citizen – met and agreed not to air the proceedings live, because of fears that politicians might make inflammatory comments or incite supporters to violence.

The recent attacks have led to a surge in rhetoric on both sides of the political divide. Some politicians have been questioned under laws banning hate speech, and the Kenyan media have tried not to add further fuel to the fire. (See Dangerous Talk in Kenya.)

Linus Kaikai, managing editor at NTV and chairman of the Kenya Editors’ Guild, told IWPR that broadcasters were right to be concerned about the “reckless” remarks coming from the political arena, and that they had valid fears about airing the rally live.

“There is a lot of concern not just among the media but among the general public on the quality of discourse out there sometimes,” he said. “There are things that politicians say. It is a real dilemma for live broadcast.”

But others have criticised the broadcasters for not carrying the event live, and instead giving it reduced coverage with news updates throughout the day.

“It was a wrong decision,” he told IWPR. “It is the right of editors to make decisions but they also have to check the news value of something. In this case I don’t think anything else could have been more newsworthy than that rally.”

Catherine Gicheru, a former senior editor at the Star newspaper, argued since television channels flagged up the CORD rally, it was inconsistent of them not to broadcast it.

“They should have covered it live after all the hype they had given it,” she told IWPR. “I don’t understand the logic behind the build-up to the event and then the total blackout on the day itself.”

Henry Makori, editor of Pambazuka News, a weekly magazine, said the importance of the issues discussed at the rally merited live coverage.

“Runaway insecurity, high cost of living, tribalism, corruption, unmet electoral pledges,” he said. “Media [act as] platforms. Their business is to provide fair coverage so that the people can decide for themselves.”

ALLEGATIONS OF PACT WITH GOVERNMENT

The decision not to cover the event live has led to questions about the independence of broadcasters, even though their representatives have repeatedly denied that they reached any formal agreement with government not to air the rally.

The managing editor at KTN, Joe Ageyo, said too much was being read into the decision.

“We cover what we want; not everything is covered live,” he told IWPR. “When Odinga came from the US, we had live coverage of his rally at Uhuru Park. It was an editorial decision to do so.”

But in the run-up to the event, the government made several statements about the dangers of incitement and informed Odinga that he would be held responsible for any unrest caused by the rally.

Makori argues that the broadcasters fell into a deliberate trap.

“The narrative had been created by government and its backers that the rallies would degenerate into chaos,” he said. “Nothing of the kind happened. It was government scare-mongering which sadly the media swallowed whole.”

Whatever the reasons behind it, the decision not to carry the rally live will feed suspicions among critics who already believe the media are in the lap of the ruling Jubilee coalition.

“It sent the wrong signals,” Gaitho said. “It is very hard to explain to an expectant audience [why] you are not showing something, and the obvious conclusion they will draw is that the media succumbed to government pressure.”

While Gaitho is sympathetic to the dilemma facing editors with regard to broadcasting incitement, he argues that the blackout was not the right response.

He points out that the media has a responsibility to determine what is appropriate for broadcast and ensure it does not end up as a medium for spreading hate speech.

Six years ago, the Kenyan media were accused of allowing politicians and broadcasters to use the airwaves to foment tensions when a disputed presidential election erupted into ethnic violence. More than 1,100 Kenyans were killed in the two months of bloodshed that followed.

Once a political settlement was brokered in 2008, the government set up the National Cohesion and Integration Commission with a mandate to investigate and take action on hate speech. A law passed the same year criminalised ethnic insults and incitement to violence.

“There is a law on hate speech which is very strict,” Gaitho said. “That is one of the landmines that editors have to navigate every time.”

But he pointed out that it was still possible for broadcasters to filter out potentially offensive material by delaying transmission by a few seconds.

“Those are valid fears – a lot of people have made objectionable comments at rallies from all sides of the political divide,” he said. “But you can still cover the rally. There are measures stipulated in the Media Council of Kenya guidelines on how live events can be covered to take care of those concerns.”

In Gaitho’s view, it is not the media’s job to “police” views expressed by politicians.

“[The media] have used that as a defence [against] unnecessary censorship because the law is clear - individuals shall be held responsible for the content of the speeches. It would have to be very extreme for media to resort to pre-emptive measures.”

MEDIA SEEN AS “MEGAPHONE” RATHER THAN FILTER

Others fear that the decision not to cover the rally live is a symptom of a wider malaise affecting the Kenyan media, particularly apparent in coverage of the recent attacks.

Political adversaries have advanced opposing theories of who was behind the attacks, in some cases openly accusing one another without offering any evidence.

Gicheru deplored the media’s tendency to simply report such statements verbatim with little interrogation of the facts.

She argues that the Kenyan media have “gone to sleep”.

“We are all in a ‘he or she said’ situation,” Gicheru said. “We don’t analyse and tell people what the position is. Why are we losing track of what we should be doing? We should show the situation and the genesis of the problem; show proof of what is being said. We have just become a megaphone, without thinking we just write what they say.”

Gicheru says the media have tended to lean too heavily towards either the government or opposition positions, and ignored their own responsibility to scrutinise facts neutrally and present them to the audience.

Judie Kaberia is Kenya Coordinator for ReportingKenya.net and Special Projects Reporter at Capital FM in Nairobi. Kioko Kivandi is an IWPR reporter in Nakuru.

This article was produced as part of a media development programme by IWPR and Wayamo Communication Foundation in partnership with Captal FM.