Kenyan deputy president’s lawyer asks judges for opportunity to expose what he says is “concerted process”.

Kenyan deputy president’s lawyer asks judges for opportunity to expose what he says is “concerted process”. 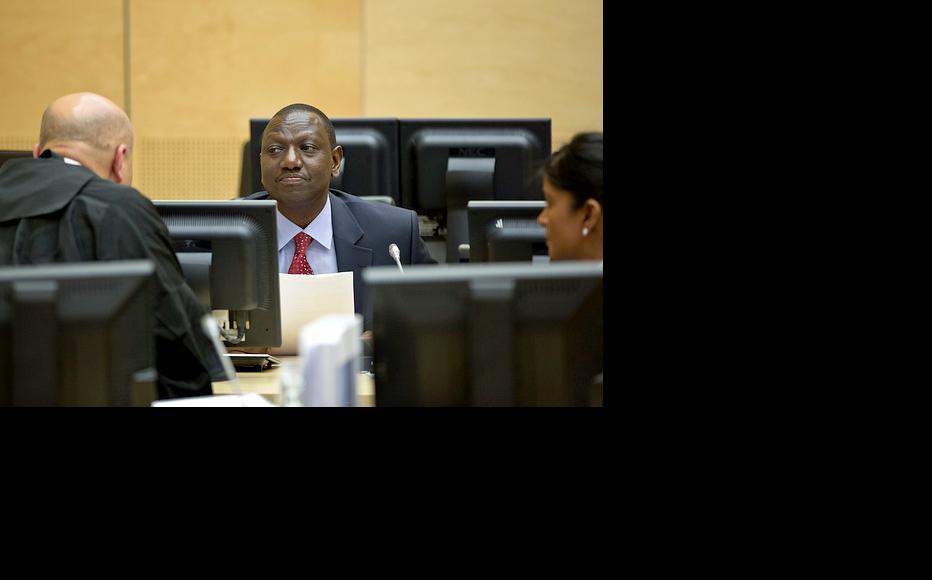 Ruto with his lawyers during an ICC status conference in The Hague. Lead counsel Karim Khan is on the left. (Photo: ICC-CPI/Flickr)
The link has been copied

The lawyer representing Kenya’s deputy president in his trial at the International Criminal Court, ICC, has lodged a scathing complaint against the prosecution, alleging that several of its witnesses have colluded to fabricate evidence to incriminate his client.

William Ruto’s lead counsel, Karim Khan, informed judges in a written submission on July 19 that “eight witnesses are engaged in a concerted process to contaminate prosecution investigations to a significant extent through the deliberate and organised fabrication of evidence”.

According to Khan, seven of the eight witnesses involved make up “the core of the prosecution case” against his client.

“[The] scheme… has been years in the making and has been, or still is, supported by various international and domestic Kenyan organisations,” the lawyer told the panel of three judges who will oversee proceedings in The Hague.

Ruto faces trial alongside a former broadcast journalist, Joshua Arap Sang, for allegedly orchestrating the violence that erupted in the aftermath of Kenya’s disputed presidential election in December 2007.

More than 1,100 people were killed and over 650,000 others displaced by the bloodshed which broke out along political and ethnic lines.

The two men are charged with murder, persecution and the forcible transfer of the population.

Kenya’s president, Uhuru Kenyatta, who was on the other side of the political divide at the time, faces trial in a separate case.

All three defendants have vowed to cooperate with the court and clear their names.

The defence’s filing requests judges to order the prosecution to call the eight witnesses in question to give evidence in sequence, right at the start of the trial.

The request follows the notice given by the prosecution on July 3 of the first ten witnesses it intends to call in the case.

The case is scheduled to get under way in The Hague on September 10.

Khan argued that it would be in the interests of justice if “this criminal scam be unmasked at the earliest possible opportunity once trial commences”.

“It will give little comfort to the defence and Mr Ruto if these key witnesses are heard many months – or even years – down the line, and only then does it become clear then that there has been an orchestrated attempt to pervert the proper administration of justice,” Khan wrote.

The defence argued further that calling the witnesses back to back would limit opportunities “to organise, collaborate and further fabricate”.

Khan said that such was “the risk of concoction and fabrication of testimony”, it might be necessary for the court to adopt specific measures covering the eight witnesses.

He suggested barring them from communicating with one another, and even preventing them from hearing one another’s testimony in court. Khan acknowledged that he would need to formally request such steps at a later date.

The defence added that it “was under no illusions as to the seriousness of the allegations”, but insisted that it had the evidence to support them.

“Allegations that these witnesses are peddling lies are not speculative, but are based on extensive investigations into the issue and are supported by the evidence collected by the defence,” Khan wrote.

The British lawyer further stated that if the testimony provided by the eight witnesses appeared to confirm his allegations, he might seek the judges’ permission to formally challenge the conduct of the proceedings.

“Such a procedure may enable the trial chamber to decide whether it is necessary and/or fair to allow the present trial to continue against Mr Ruto or whether the trial should properly be terminated,” he wrote.