US praises Nur-Saltan as “global leader” in repatriating former fighters and their families.

US praises Nur-Saltan as “global leader” in repatriating former fighters and their families. 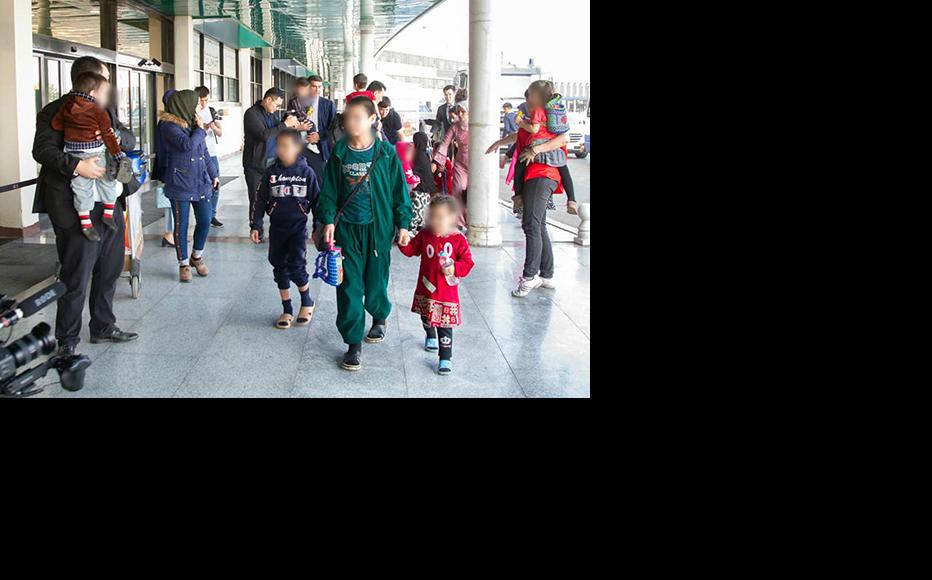 Children being returned from the middle east to Kazakstan. (Photo courtesy of the Ministry of Foreign Affairs, Republic of Kazakhstan)
The link has been copied

Kazakstan is continuing its efforts to bring back its citizens who travelled to fight in the middle east, with particular focus on returning children.

Since early 2019, Kazakstan has been conducting large-scale humanitarian operations to return women and children from combat zones in the region. The first operation was held in January with two more in May. In total, more than 600 people have been returned this year, including 470 children.

In October, US acting under secretary, Nathan Sales, visited Nur-Sultan and noted that Kazakhstan had become a global leader when it came to the repatriation of its citizens from the middle east.

“We see that not only the government of Kazakstan made the best use of all its resources, but so did the private sector and religious authorities, as well as medical workers and psychologists, who help those being rehabilitated. We see that this is a very holistic approach that the rest of the world can take as a foundation,” Sales told journalists, according to Kazinform.

Most recently, on November 27, 14 children – eight girls and six boys – were returned from Iraq. The eldest child is 10 years old, while the youngest one is nearly two. All were the children of Kazakstani women in prison in Iraq.

“We found their grandmothers, aunts, uncles here, in Kazakstan,” said Stanislav Vasilenko, ambassador at large of the Kazak foreign ministry. “We tested their DNA and submitted their results to Iraq. They checked everything there. We proved these children were ours.”

“The most difficult moment in these women’s lives was to say goodbye to their kids. Both children and women cried a lot, as they knew they won’t see each other ever again,” Berikbaev said.

However, according to Daniyar Baibekov, the second secretary of the foreign ministry, none of the mothers hesitating about consenting to the return of their children.

Describing the conditions in Iraqi jails, he said that “40 persons, including kids, were placed in one prison cell. They have rice and water twice a day”.

Political analyst Yerlan Karin explained that the mission had been the result of careful coordination between Kazak diplomats and Iraqi legal and migration officials.

“Along with it, the Kazakstan authorities developed a detailed plan for the evacuation of the kids – the destination and coordination of the charter flight. Apart from diplomats, special medical personnel including paediatric psychologists were involved in the evacuation group,” Karin said.

Gulnaz Razdykova, director of the Centre for Analysis and Development of Interfaith Relations of Pavlodar, said that work to integrate the children back into society was vital.

For instance, in Aktau, the largest rehabilitation centre, a team of religious experts and psychologists work with all returnees for two months of rehabilitation, after which women and children are allowed to return home, although men are likely to go on to serve a prison term.

“To get them back to peaceful life, the kids were taught to have a daily routine: getting up, morning exercises, breakfast, lessons, lunch, etc,” she said. “They were doing sport and creative work. At this stage, we saw positive changes in them.”

According to her, many of the adults who returned have found jobs, while children were able to resume or start their education. All the children were provided with Kazak birth certificates.

The Kazak NGO Pravo has been rehabilitating children returned from combat zones in its centres since 2016, and also train lawyers, psychologists, social wo  a crkers, teachers and law enforcement officers.

In 2018, the fund received 91 kids from conflict areas in the middle east, as well as adults who had returned voluntarily via the embassy of Kazakstan in Afghanistan and Turkey.

According to Pravo, kids from across Kazakstan were among those in conflict areas, although the majority of children came from Uralsk and Atyrau.

“Girls that came to us after the first operation live like ordinary people now,” said Olga Ryl, the head of the foundation. “We were concerned about their adaptation in our environment, but schools have helped us a lot. Our children took part in national holidays. It means they feel themselves a part of our country.”

Other Central Asian states have also been bringing their citizens back from the middle east, although in smaller numbers.

At the end of April, Tajikistan brought 84 children back from Syria and Iraq. Most of their mothers remained in prison.

On May 30, Uzbekistan held a successful humanitarian operation to return 156 citizens from Syria during the holy month of Ramadan. On October 10, they carried out a similar mission to return 64 kids from Iraq.

The mothers were reportedly sentenced to lengthy or life sentences for participation in various international terror organisations.

At home, Kazakstan takes the issue of radicalisation extremely seriously and convictions are rising. According to the prosecutor general’s office, 656 people were convicted of extremism and terrorism-related crimes in 208, up from 94 in 2016.

Prisons also run awareness-raising and educational work to attempt to rehabilitate those convicted of such offenses.

Gabit Konusov, research officer at the Institute of Modern Studies of the Eurasian National University, said that the country’s strong national identity was helping drive the reintegration process.

“I think the most important thing we have is a self-confident state,” he said. “This is what makes it find money, volunteers; and the families of returnees stand up for the state. The country develops the system of de-radicalisation, established the religious rehabilitation service that works with the convicts.”