Since 1991, the ex-leader has become identified with the state itself, but his status is now crumbling. The impoverished village of Prigorodny lies 10 kilometres from the shiny centre of Kazakstan's capital Nur-Sultan. The country's deep inequality has driven the most serious unrest the oil-rich Central Asian nation faced in decades. © CABAR

Vast natural resources have made a select few rich while millions of Kazaks struggle to make ends meet. 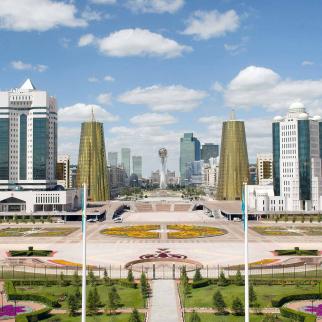 A view of central Kazakstan's capital Nur-Sultan, with the 105-metre tall Baiterek tower on the horizon. Previously known as Astana, meaning "capital city" in Kazakh, the city of 1 million was renamed on 20 March 2019 as a tribute to the long-ruling Kazakh President Nursultan Nazarbayev, shortly after his resignation. © Leon Neal - Pool/Getty Images

Kazakstan: Will Nur-Sultan City Be Renamed?

Calls for reinstatement of “Astana” as ex-leader continues to be blamed for legacy of corruption and inequality. 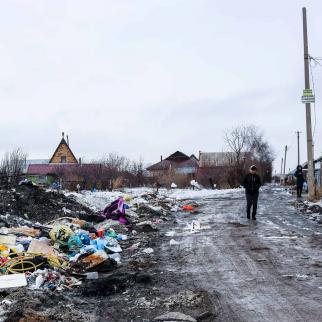 Rubbish pile up on the side of the village’s muddy, unpaved streets. Residents complain that when it is dry, the roads are dusty and when it rains, they are muddy. Taxi drivers are unwilling to take passengers here. © CABAR

In Nur-Sultan, glitzy shopping malls and swanky hotels mirror Kazakstan's vast natural resources. In the outskirts, villages with no running water and basic services tell a different story of poverty and inequality.

Since 1991, the ex-leader has become identified with the state itself, but his status is now crumbling. Nursultan Nazarbayev ruled Kazakstan between 1991 and 2019. Over three decades the former president and his inner circle, accused of corruption and nepotism, have built a cult of personality around him. © elbasy.kz 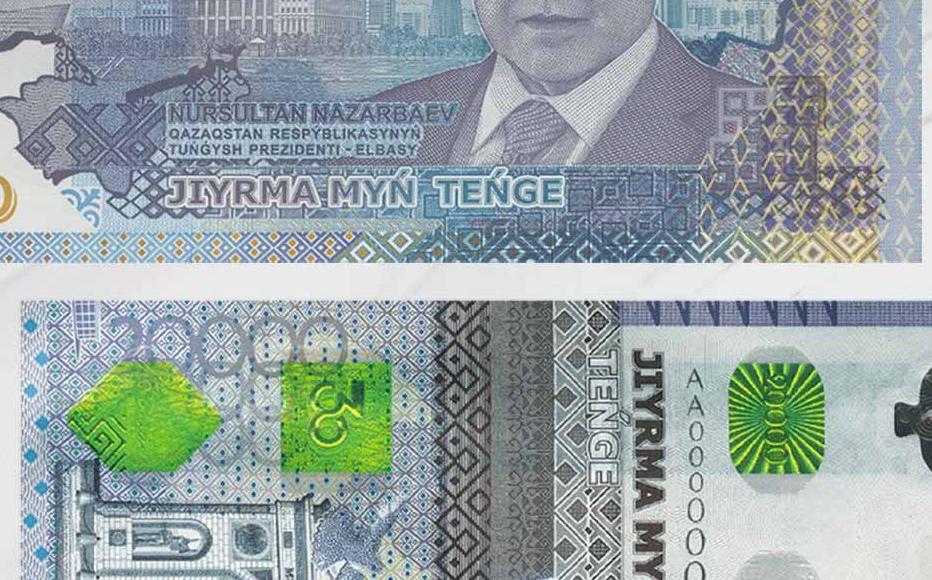 The former president features of the 20,000 tenge banknote (about 46 US dollars) issued in December 2021 to mark the 30th anniversary of Kazakstan's independence.
The link has been copied

An image of former president Nursultan Nazarbayev features on the 20,000 tenge (45 US dollars) banknote that Kazakstan’s central bank unveiled in December 2021 to commemorate the 30th anniversary of the former Soviet republic’s independence. It was the latest element of a cult of personality around the 81-year-old leader has been building around him during three decades of rule – but will probably be the last.

In January, angry citizens took issue with high fuel prices and the political hold Nazarbayev had on the country in the largest and deadliest unrest in the Central Asian nation’s recent history.

Chanting “Shal, ket” - old man, leave - protesters smashed a monument to him in Almaty, the country’s commercial centre, as they accused the former president and his family of corruption and responsibility for rampant inequality.

Laying low while the country plunged into violence, the former president reappeared in a video address on January 18, in which he said he was now a “pensioner,” and that current president Kassym-Jomart Tokayev was in charge.

Few believed the statement. On March 19, 2019, Nazarbayev announced his resignation and handed over office to then-prime minister Tokayev, but he retained some key positions and continued to pull strings behind the scenes.

Since January, the wind has changed. Citizens criticise him; openly, politicians have distanced themselves from him and media started publishing articles titled Winter of a Patriarch.

In the aftermath of the unrest, Nazarbayev was stripped of his lifelong post as head of the security council and chairman of both parliament and the ruling Nur Otan party. Family members faced the same fate as three of his sons-in-law and a nephew lost their posts in key state institutions. On February 9, Tokayev gave the government two months to develop a plan to repatriate money held in foreign offshore facilities. While he did not mention Nazarbayev, the decision was seen as a direct hit on the former president and his inner circle, believed to have amassed vast fortunes.

“The Nazarbayevs were deprived of [their] political assets,” Nur Sultan-based journalist Dina Yelgezeka told IWPR. “The Nur Otan party, which the family dominated for 23 years, was returned to the state. Many people say that Nazarbayev’s empire has ended at this point. Let it be so.”

In a symbolic gesture, Kazakstan-based composer Shamil Abiltaev said he’d destroyed the kyui, or traditional Kazak play he wrote for Nazarbayev in 2014 and started working on another one titled Kantar Kyrgyny - the January tragedy, in the local kanguage.

Nazarbayev has become identified with Kazakstan itself. A former steel factory worker, he climbed the ranks of the Community party to become, in 1989, first secretary of the then-Soviet Socialist Republic of Kazakstan, the highest position in the country. As the Soviet Union disintegrated, he took the reins. On December 1, 1991, he stood alone on the ballot for the country’s first presidential elections and won with 95 per cent of the vote.

Since then, he firmly held on to power through constitutional changes and elections in which he faced only token opposition.

A careful state-sponsored personality cult built his image of Elbasy, the Leader of the Nation, a title he was official awarded in 2010. Innumerable streets, parks, monuments and a museum are dedicated to him. The capital’s leading university and airport are named after him. He was nominated twice for the Nobel Peace Prize to mark his efforts to get rid of the Soviet nuclear arsenal Kazakstan inherited upon independence and to close the Semipalatinsk test site. Since 2012, December 1 has been an official holiday marking the date on which he was elected.

In 1997 he moved the capital and poured billions into turning then-Astana, a dusty town in the northern steppes, into a glitzy city of skyscrapers and shopping centres, while surrounding villages still languish in poverty. When he stepped down in 2019, his brainchild was renamed Nur-Sultan as a tribute. Activists now call for the capital to be renamed.

The image that took 30 years to build crumbled over a few days and Kazaks now want to move on.

“When Nursultan Nazarbayev resigned, we felt very sad... We could not even imagine that another person could rule the country. Then the capital was renamed [after him] and his monuments were erected everywhere. People got angry…. Young people leave because they don’t see any future here… We are tired of this,” Zhanarbek Orazov, a resident of the southern city of Shymkent, told IWPR.

“We have addressed the authorities, but no one even listened to us…I cannot respect Nazarbayev. Air fares are exorbitant because of the monopoly of Air Astana, which belongs to his second wife. This is no secret. Deputies, officials have raised this question, but no one could have influence on this company,” she told IWPR.

Many point out that the gap between the former president and citizens has widened.

“I think he didn’t even know the problems [of the people], said Adilet Yergizhitov, a lawyer in Semey, a city in the Kazak part of Siberia. “Those close to him made a khan [chief], a powerful ruler. No one told him the truth. He may have believed that all Kazaks live happily because before [his visits] to any region, people repaired roads, cleaned and painted everything, and expressed fake gratitude to him.”

Political analyst Daniyar Ashimbaev said that those around Nazarbayev helped to discredit him.

“As he got older, his foot-lickers elevated his cult, and some relatives … talked about the importance of hereditary succession of power. [He] repeatedly said that there would be no monarchy in the country, but the race for power continued,” he noted.

Nazarbayev also kept to a clan system for political appointments.

“Almost 97 per cent of ministers were from the Shaprashty [a clan of the Senior Zhuz, a tribal union of clans from the south and southeast]. It is his clan…His native Almaty region was headed only by those from the Shaprashty,” an ex-parliamentarian told IWPR on condition of anonymity, adding, “All these things have had a negative effect on the country’s economy.”

Nonetheless, amid his criticism, Tokayev continues to give credit to Nazarbayev’s contribution in building modern Kazakstan.

“I want to emphasise… that the first president has done much to turn our country into a strong state,” he said at the Nur Otan party congress on January 28.

“Nazarbayev has done some good things…like the Bolashak programme, which sends our children to study to the best universities of the world. However, we can hardly live because of the crisis. I hope the new president will put things right,” she said, adding that while officials worked to build the country’s image, living standards got worse.

And there remain those who think that it may not all be over for Nazarbayev.

“I think Tokayev will do everything to return the prestige of Nazarbayev,” Saken Sarkulov, who heads the Korkeitu Fund, established by Kazakstan’s chamber of commerce to support businesses. “I won’t be surprised if he will be speaking before the people as the leader of nation in a year. However, his clan will certainly stop robbing the people."