Karabakh: Will Turkey's Fierce Support of Azerbaijan Pay Off?

Erdogan’s stance broadly backed by both the public and his political opposition.

Karabakh: Will Turkey's Fierce Support of Azerbaijan Pay Off?

Erdogan’s stance broadly backed by both the public and his political opposition. 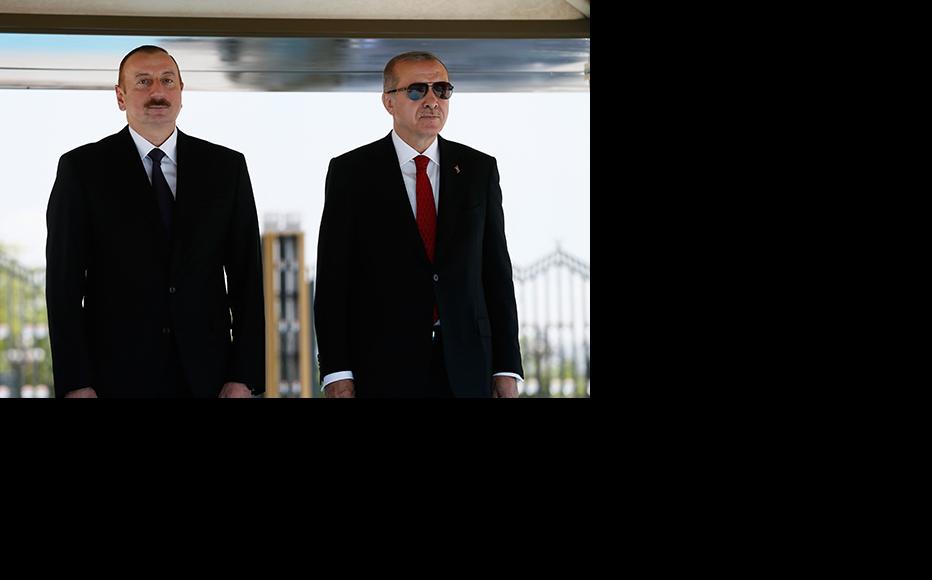 With Turkey positioning itself as Azerbaijan’s chief ally in the fighting over Nagorny Karabakh, analysts argue that the crisis provides both a useful distraction from domestic woes and the opportunity to pursue broader regional ambitions.

Ankara has enthusiastically supported Baku since fresh fighting began over the enclave on September 27 on both the world stage and in the provision of military equipment including armed drones. The Syrian Observatory for Human Rights also claimed that nearly 1,200 Syrian fighters had been sent by Turkey to fight on behalf of Azerbaijan.

“As long as the Karabakh issue is not resolved, and Armenia does not withdraw from Azerbaijan soil, it will not be possible to end the unrest and conflict in the region,” Turkish President Recep Tayyip Erdoğan said in an October 3 televised address.

This stance was repeated by Turkish foreign minister Mevlüt Çavuşoğlu in Baku during meetings with Azerbaijani officials on October 6. He stressed that any solution would only be possible if Armenia retreated from the lands it currently occupied.

“The world must side with the right one in the Nagorno-Karabakh tensions, and that right one is Azerbaijan,” he said.

Karabakh is internationally recognized as part of Azerbaijan but has been run by a local Armenian administration since the 1994 ceasefire that end the war that followed the disintegration of the Soviet Union. Both sides blame each other for the current violence, the worst of the last 26 years.

In this instance, Erdogan’s policy also has the enthusiastic backing of much of the opposition.

His chief foreign policy adviser, CHP lawmaker Ünal Çeviköz, told IWPR, “The only way for a resolution is Armenia withdrawing from the invaded lands,” adding that nonetheless they supported negotiations to reach that end.

The Peoples' Democratic Party (HDP), a pro-Kurdish opposition party, was the only grouping in the Turkish parliament not to sign the statement. Instead, the HDP called for a truce and accused the Turkish government of fueling tensions between Azerbaijan and Armenia.

“The government engages in war propaganda by openly supporting the military conflict and is publicly resorting to belligerent rhetoric against the Armenian state instead of persuading both parties to start negotiations and push for de-escalation,” HDP lawmaker Garo Paylan said.

Most Turkish citizens side with Azerbaijan in its conflict with Armenia. The two countries have strong ethnic, cultural and historical ties and refer to their relationship as being one between “two states, one nation”. Turkey was the first country to recognize Azerbaijan's independence, and the two went on to forge robust economic ties.

İbrahim Aydınlı is a director of Genç Memur-Sen, the youth branch of the Confederation of Public Servants Trade Union, which has staged pro-Azerbaijan demonstrations in cities across Turkey.

He said that the international community favoured Armenia, and thus Turkey should be at the negotiation table to ensure a “fair solution to the conflict”.

Analysts also note that this foreign crisis is a welcome distraction from economic woes at home. Turkey's lira hit an all-time low on October 8 at 7.89 against the US dollar, having already lost 25 per cent of its value in 2020. These ongoing issues, compounded by the coronavirus pandemic, have lost AKP popular support. According to the pollster Metropoll, their popularity fell to 31 per cent in August 2020. In the 2018 parliamentary elections, the party received 43 per cent of the vote.

Ilhan Uzgel, a leading Turkish foreign policy expert, said that Ankara’s fierce stance said as much about its internal as its external dynamics.

"Geopolitics and realpolitik gain weight around the globe. This brings more authoritarian regimes and rising nationalism and also extends the swing of right-wing populism. You can see it explicitly in Turkey's foreign policy. The Erdogan administration tries to stop the [erosion of support] they experience by keeping the country in a full-time crisis mode," he said.

This meant, Uzgel continued, that Turkey was effectively pursuing the same policies at home and abroad.

“The domestic aspects of this are nationalism, right-wing populism and authoritarianism,” he said. The AKP government spotted this global dynamic in its early stages and internalised it to domestic politics. The Islamist, nationalist, and neo-nationalist coalition in Turkey paved the way for the militarisation of its foreign policies.”

“Turkey is the most vocal international actor regarding the crisis in Nagorno Karabakh,” said Hakan Aksay, a veteran journalist for the T24 digital news outlet who specialises in Russia-Turkey relations.

He said that Erdogan’s broader regional intentions were driving Turkish involvement in the crisis.

“Turkey actually challenges Russia in the Nagorno-Karabakh front. Russia, France, and the US are the main actors now, and Turkey wants to be included in the club,” Aksay told IWPR.

However, he continued, Russia was unlikely to allow that.

“Putin does not want the West to be more involved in the situation, and he also wants to balance Turkey's influence in the region,” Aksay said. “I believe Putin is kind of regretful about his close friendship with Erdogan lately.”

Indeed, Turkey was not included in negotiations that produced a Russia-brokered truce on October 10.

In recent years, Russia and Turkey have already had military advisers, mercenaries or troops deployed on opposite sides of major conflicts in Syria and Libya.

"But Nagorno-Karabakh, an ex-Soviet Caucus and 'the back garden' of Russia, is not the same as Syria or Libya to Moscow,” Aksay said. "There is a high possibility that the tension between Russia and Turkey can increase dramatically. Putin would not accept a Turkish presence in the area, especially under the claims about Turkey's deployment of mercenaries from Syria to the region.”

Mustafa Kaya, the deputy chairman of the opposition Felicity Party (SP), foreign relations committee, agreed that Russia was trying to keep Turkey away from the South Caucasus.

Although he stressed that his party fully supported Turkey's policy on Karabakh, he added that “we cannot evaluate any of the diplomatic steps taken by Turkey separately. Syria, Libya and Karabakh, all of them are interrelated.

“I believe possible negotiations between Turkey and Russia about Syria and Libya also came into play when the two countries decided their last stances on the issue.”

Giving Voice, Driving Change - from the Borderland to the Steppes
Azerbaijan, Karabakh, Turkey
Crisis, Regime, Conflict
Connect with us