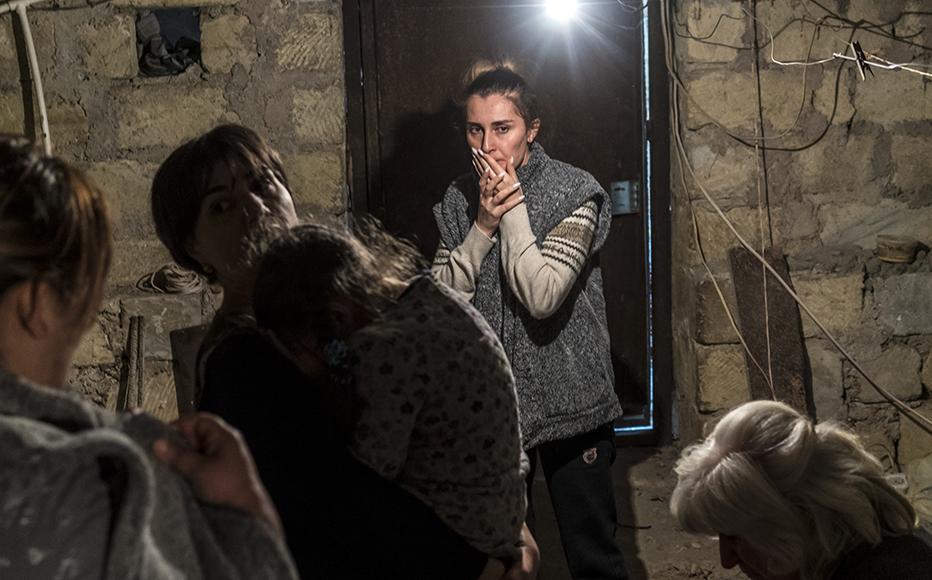 Residents shelter in a basement as air raid sirens sound in Stepanakert, Nagorno-Karabakh. © Brendan Hoffman/Getty Images
The link has been copied

The current fighting in Nagorny Karabakh marks the longest escalation since the 1994 ceasefire, and likely the one where we are going to come out with heaviest losses in terms of human lives.

And everything about this round of violence feels and looks different. The language the leadership is using, the numbers of casualties - and of course, the public reaction.

On one hand there is this sense of euphoria which I find hard to understand and process. How can we be celebrating regaining territories, when there are soldiers dying on the frontline?  There is also hysteria which breeds an ugly form of harassment against those who are against this war and are advocating for an immediate end to it.

On social media I see posts written by people who have just lost someone or had a loved one hospitalised, filled with anger over the price paid for a war which is not theirs. And in response I see countless comments fueled by blind nationalism, telling this person to shut up, and to stop being emotional and think of the future because once Azerbaijan regains these territories, there will be no war ever again and all will be back to normal.

How and when did people lose their ability to see what is really happening? This war has been with us since 1994. And the so-called parties to the conflict were responsible for finding the solution, but chose not to. Now, we are paying the price for that 26-year delay of pointless meetings and lack of transparency.

Are these people suffering from some kind of amnesia? Don’t they know that it is this president who has dragged this conflict out all this time? Don’t they remember that this conflict has been used as a bargaining chip for years? Have they forgotten about the corruption, the rigged elections?

Ilham Aliyev has cracked down on civil society, caused so much despair to countless families of former and current political prisoners, silenced free media.

This war is clearly the only card that Aliyev had left to legitimise his leadership. He will be president for life. So where does that leave us? A corrupt, undemocratic president will be ruling the country, while continuing to suppress independent voices.

It’s also different in terms of the actors involved. Turkey, for instance, which has been on the side of de-escalation but is suddenly now all in favour of war.

I have lived in Turkey for nearly 20 years and I have never seen Azerbaijan mentioned on the news as much as in the last week. So why is Turkey – the so-called brother country – so in favour of this recent escalation? What interests does it have? Karabakh was there the whole time, so what changed? Is it because Turkey wants to regain its regional leadership and prove something to Russia? If so, then at whose cost?

And then you have a disengaged US and a distracted Europe. We no longer have the geopolitical equilibrium that existed before and so everything during and after this conflict is new.

Azerbaijan, in this conflict, has all the international norms on its side. And yet, its government deliberately destroyed any possible platform within the country that could have helped its government advocate for a resolution based on the UN Security Council Resolutions. Bit by bit, all of the country’s functioning civil society was destroyed in the last decade. Rather than building a stable, democratic, transparent government, with civil society by its side, this leadership made sure none of this would be attainable.

Had Azerbaijan succeeded at becoming a democracy, I am certain we would not be in this situation.

Local independent media, on the ground, is doing the best they can, but they are badly overstretched. Most outlets have been inaccessible within Azerbaijan since a 2017 court decision that blocked access to many independent news platforms. Some still have on-going court cases. Journalists working in the country have been threatened, harassed, intimidated and jailed. Azerbaijan’s poor human rights record has been documented in countless international reports.

And yet now, the very government that chased its civil society for years expects that there to be objective reporting. This country has been hostile to foreign journalists for a very long time and now they expect to have international coverage because it suits their interests.

The hardest part about reporting on Nagorno Karabakh is being labeled because there is an expectation of only one kind of reporting – and it’s the story of one side. The minute you say, well this footage is old, or this is not credible, or you start asking questions, you are labeled.

And it doesn’t matter if you are Armenian, Azerbaijan or a foreigner. If one side doesn’t like what they are seeing, and reading, you are working for the enemy. You are labeled as one-sided, or biased.

So you end up working quietly, keeping your head down, doing what you can, and hoping that someday people on both sides understand that fair reporting is not about one side of the story but about all sides.

Holding these views means I feel ostracised by even those I thought understood the complexity of the situation.

There is so much hatred for those who are against this war and who want peace and who have been openly speaking about it. Regardless of your vision of this conflict, your awareness of international law, it doesn’t matter. It is you are either with us or against us kind of mentality.

I am seeing advocates for reconciliation among those who are in support of this war and demand an end of occupation. Once Armenian forces are out of Azerbaijan, they say they will be the strongest advocates of peace. But how can we expect reconciliation when we have done very little in terms of showing that we truly are for peaceful coexistence? It is one thing to be making statements, and giving guarantees but in the absence of past conversations and any steps taken, these guarantees are just words. It is not going to be easy, and neither of the sides can do it alone. Involvement of third parties, will be needed in order for any prospects for co-existence to truly sink in and if ever, made possible.

I do believe that there were, are, and will always be avenues for engagement. The problem is that everything done until now in terms of confidence building has been swept away. Given the current rhetoric of violence and hate, it will take years, if not decades to rebuild. We don’t even understand the extent of the trauma yet.

Arzu Geybulla is an Azerbaijani journalist currently based in Istanbul.

Giving Voice, Driving Change - from the Borderland to the Steppes
Azerbaijan, Karabakh
Crisis, Journalism, Conflict
Connect with us