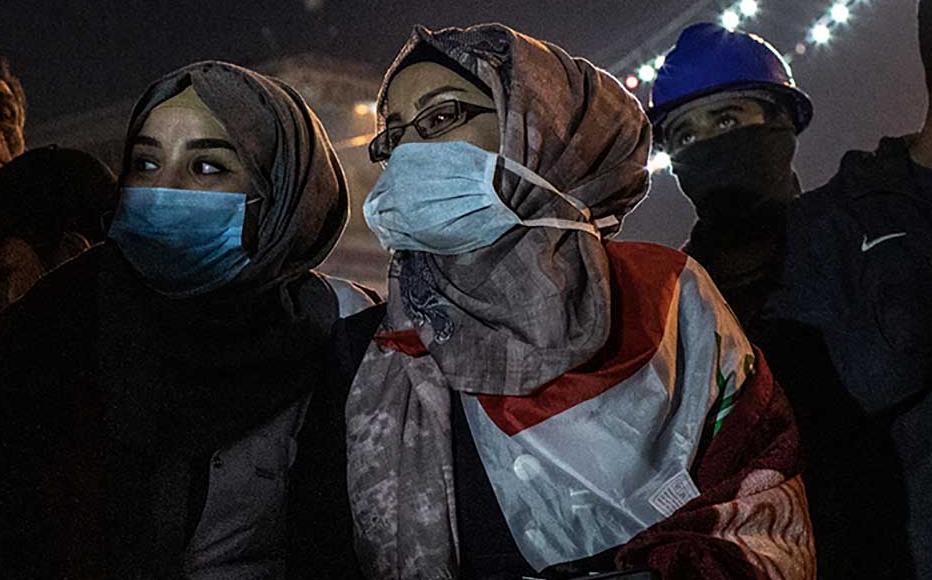 Aya Ameer (L) and her relative Duaa Mohamed during a protest at Tahrir Square in Baghdad. © Erin Trieb/Getty Images
The link has been copied 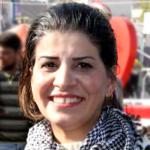 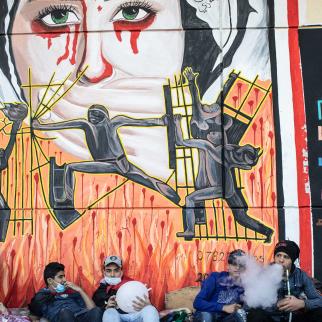 In recent years Iraqi artists have developed their street art and caricatures in support of the anti-government movements. © Erin Trieb/Getty Images

“My Art is a Tool to Defend Freedom”

How one IWPR trainee uses political cartoons as a call for action.

When the October 2019 demonstrations happened, many women and girls of all ages went to the protests. Their stories were everywhere on social media; they were inspiring and influential and they still are.

Their role was not traditional or superficial. Women were planning, writing, hurting, among the paramedics in critical and dangerous locations.

There were women acting as human shields for the peaceful demonstrations to protect them from being attacked or prevent clashes with the security forces. Some were reporting on what was happening - despite the internet shutdowns we faced - not to mention gathering donations and providing logistical support.

The role Iraqi women played has been great in all the stages of protest, since the first big one in 2004 which was against Resolution 137 [to eliminate civil marriage and place divorce and inheritance rights under the control of the religious authorities].

Women protested and organised sit-ins to demand their rights as women and as Iraqis. Many women faced threats, were killed or forced into exile as a result of this, although there wasn’t much coverage of that at the time.

Demonstrations have played a great role in creating a thorough understanding of what freedom of expression is, and this came in stages. The widespread demonstrations which hit the streets on February 25, 2011 were suppressed; many activists were killed under the al Maliki government. Then the protests renewed in July 2015, and continued for months. They were ended by the Sadr movement, which offered to act as a mediator between the protesters and the government. They dealt with protesters’ demands by procrastination and even threats.

A new awareness of freedom of expression started to emerge in 2017 and 2018 which was reflected by the October demonstrations in 2019. This was the best proof of our raised awareness of how to use freedom of expression through peaceful demonstrations – and it faced the worst violence used by the security forces along with some corrupt militia groups.

They used live ammunition and tear gas, as well as abducting and assassinating male and female activists. Hundreds were threatened.

The demonstrations came in response to the failing governments from 2003 until which dragged Iraq into repeated crises which fuelled sectarianism and tore society apart, created armed groups and militias and increased the influence of corrupt politicians.

Unemployment rates were soaring and poverty was deepening, with 30 per cent of people living under the poverty line.

The impact the [Arab Spring] revolutions had on us was primarily the interaction and cross-national solidarity. Many of the activists were supporting these revolutions on social media whether in Syria, Egypt, Tunisia or Sudan and Lebanon. The uprisings also created the same motivation within other counties in our region, which monitor the Iraqi situation closely.

So these revolutions reinforced the desire to rise up and bring change in Iraq and even gave us new ideas for tactics in our demonstrations. Iraqi protesters proved to be able to control the uprising and keep its identity, goals and peacefulness and not to be dragged into violence, the opposite of the government institutions.

Freedom of expression is important for Iraq because it’s the best method for peaceful change for all Iraqis.

Institutionally we have texts that guarantee freedom of expression, but practically, freedom of expression is restricted for Iraqis of both genders and any age or cultural background. Many are kidnapped or even killed if they use their constitutional right to demand their basic freedoms or those of marginalised groups who face violence and harassment.

My role is the same as everyone who believes in his or her rights, humanity and the dignity of their country. Freedom of expression is a right and without it we can't call any country a democracy. A country where freedom of expression is being restricted and attacked and those demanding it are killed is surely not democratic.

Iraqi women are great and have the ability to lead change. Women along with men will reach our goals of stability and social justice and freeing our politics from corrupt and out-of-control militias. For human rights to be respected and law to be enforced to achieve a democratic and safe country for all.

Intisar Al-Mayali, 48, lives between Baghdad, Najaf and Erbel. A correspondent, human rights defender and trainer, she is an elected member of the secretariat of the Iraqi Women’s Association.