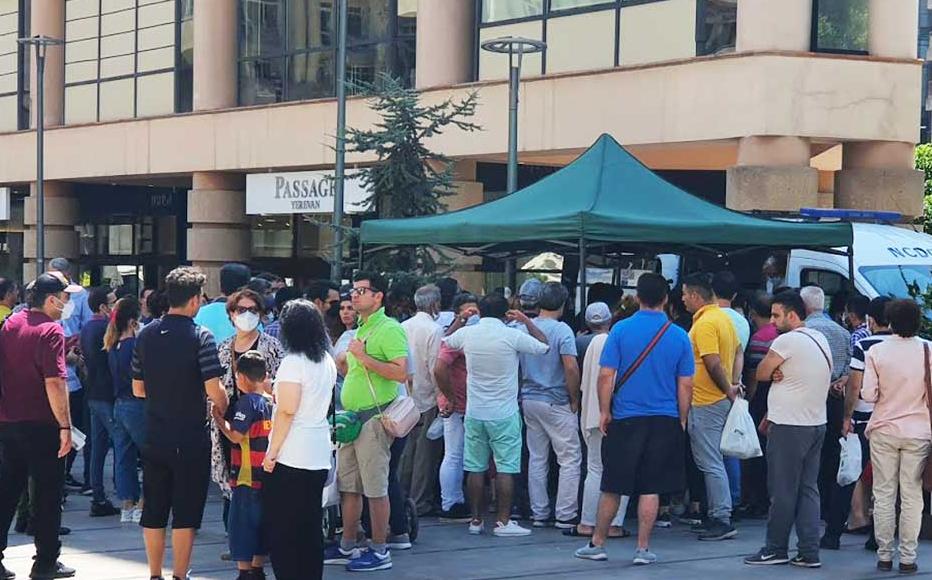 Residents of Iran in queues in front of mobile clinics in Yerevan awaiting their turn on 21 July 2021. © Arshaluis Mghdesyan/IWPR
The link has been copied

Thousands of Iranians are travelling to Armenia to be vaccinated against Covid-19 amid a serious shortage of vaccinations in the Islamic Republic.

Armenia announced in May that foreign citizens could get vaccines for free without prior registration, and mobile clinics have since opened in Yerevan to facilitate vaccinations for tourists.

Meanwhile, Iran is experiencing a rapid spread of the Delta variant, with Tehran and much of the country declared to be “red zones.” The average rate of infection has reached 22,000 daily with mortality running at about 200 people a day, the highest in the region.

Iran has vaccinated only 2.6 per cent of its 84 million population, with currently only emergency service workers and those over 60 eligible and other expecting to wait around six months to receive their jabs. The country has ordered supplies of the Chinese and Russian vaccines, with its own production under way.

Although Iran has vowed to start mass vaccinations in September, many citizens are not willing to wait, especially when neighbouring Armenia is offering vaccines for free.

Iranians, who can travel visa-free to Armenia, are also taking advantage of low vaccination take-up amongst Armenians, less eager to be vaccinated as a result of widespread conspiracy theories and disinformation.

According to the ministry of health, 131,080 people had received the Covid-19 vaccine in Armenia as of July 18. Of this, 94,000 received their first dose while the remaining 36,000 are fully vaccinated. However, this figure includes a substantial number of foreign citizens.

“Approximately 55,000 people, which amounts to [almost] half of all vaccinated people in Armenia, are foreigners,” acting Prime Minister Nikol Pashinyan said during a recent government meeting.

According to data from the tourism committee at the ministry of economy, the number of Iranians who visited Armenia in June twice exceeded the number of visitors in March, when Iranians often travel to Armenia for the Novruz spring holiday.

“About 4,000 Iranian citizens visited Armenia in March, while in June their number exceeded 8,000,” a spokesman for the committee said.

Prices for bus and plane tickets from Iran to Armenia have doubled, while the number of flights have also increased. According to Yerevan’s Zvartnots airport, Air Armenia operates daily flights from Tehran to Yerevan and from Tabriz to Yerevan five times a week.

“But there is still a shortage of flights to handle the flow. All tickets are sold out till the end of August,” the tourism spokesman said.

Although Armenia also has the Russian Sputnik V and Chinese Sinovac vaccines available, foreign citizens are only eligible to receive the Astra Zeneca vaccine and must also have an Armenian SIM card.

Iranians report spending hours in queues, even spending the night outside mobile clinics awaiting their turn.

“We often stand here for hours, many of us sleep right on the street in hope that we won’t lose our place and get the vaccine at least the next day,” said Rahim Agjo, 35. “I came here with my family. We want to protect ourselves from coronavirus. In Armenia, you can get the vaccine in one or two days, but in Iran you have to wait for months.”

Another Iranian, who identified himself as Hosseini, complained about the long queues for the vaccine.

“We bought very expensive plane tickets and arrived here in order to get vaccinated,” he said. “The travel agency where the tickets were sold told us that it would be done quickly, but we are still here, in this heat, which sometimes reaches 40 degrees Celsius, we wait for hours and sometimes for days.”

The influx of Iranians has caused some controversy in Armenia about whether it makes sense to vaccinate foreigners for free, with widespread debate on social media about the wisdom of providing the jabs at the expense of local taxpayers.

Armenian officials argue that the visitors more than make up for the cost of the vaccination by the amount of money they spend while in the country.

“Iranians spend much more money in Armenia than the cost of the vaccine,” said Armenian minister of economy Vahan Kerobyan.

However, in light of the increased demand, the authorities introduced new regulations making it compulsory as of July 15 for those who want to get the vaccine to spend at least ten days in Armenia.

Some Iranian nationals are discontent with the new compulsory lengthier stay.

“We can understand the intention of the Armenian authorities, they want to boost tourism in the country through free vaccination, but ten days are too much,” said Mohsen, 42. “They could at least reduce this time to three to four days, which we spend in Armenia anyway while waiting for our vaccines. What should we do here for so long?"