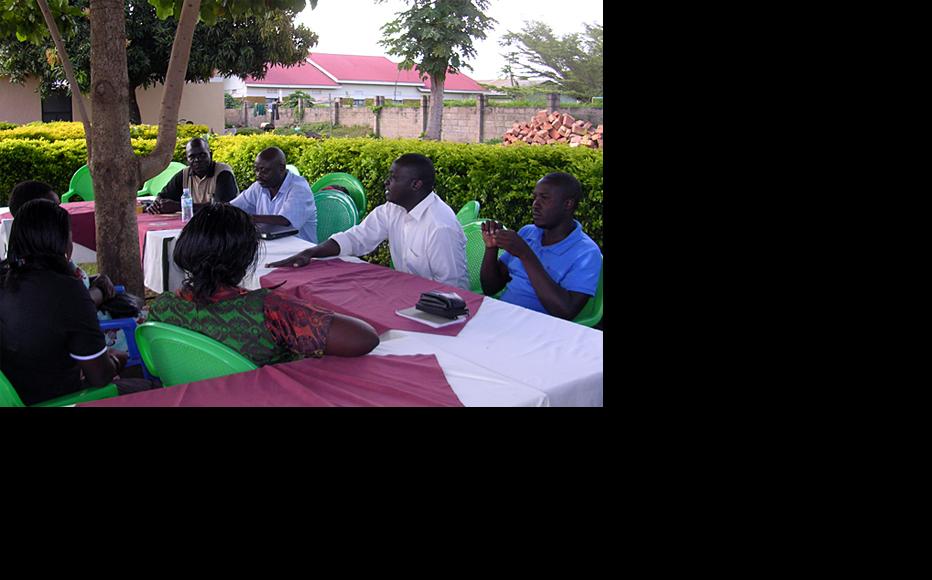 Listeners to IWPR’s Facing Justice programme debate the importance of war memorials and establishing a record of the conflict in northern Uganda. (Photo: IWPR)
The link has been copied

Participants in a community debate about the role of war memorials in northern Uganda say IWPR’s coverage of the subject has shed light on a sensitive issue that has been overlooked by the local media.

At a debate organised by IWPR in the eastern town of Soroti on October 1 – to which listeners to IWPR’s Facing Justice radio programme were invited – participants said they were grateful for the opportunity to point out shortcomings in the government’s approach to building memorials in the region.

The issue is one which listeners say has been ignored by media, apparently out of fear of offending government officials.

“Such programmes are often [regarded to be] stepping on someone’s toes and are accused of sabotaging government programmes,” said Paul Ochan, a Facing Justice listener from the Teso region.

“The management of [radio] stations [are] reluctant to [approve] such programmes for fear of government retaliation, for example closure of stations.”

The programme, which aired on the local Voice of Teso radio station, debated the adequacy of government efforts to establish a record of the two-decade war with the rebel Lord’s Resistance Army, LRA.

Soroti is home to the Mukura memorial erected at a site where 55 people suffocated to death in a train wagon in 1989 after government troops lit a fire next to the wagon. The armed forces said that those killed were supporters of the LRA rebels.

Voice of Teso is one of seven radio stations across northern Uganda that are airing Facing Justice, IWPR’s bi-monthly radio magazine, produced in English and three local languages.

The show, which is produced in cooperation with the Northern Uganda Media Club, NUMEC, addresses human rights and justice issues in post-conflict northern Uganda. The project also works with and trains reporters across the region in an effort to boost the skills of local journalists and the capacity of local media outlets.

According to numerous contributors to the debate in Soroti, radio stations that broadcast programmes on human rights, governance and accountability issues in the area are often accused by local leaders, such as resident district commissioners, RDCs, of interfering with government initiatives to heal the scars of the 20-year rebel war.

Most stations are seen as shying away from addressing such issues, especially since most in the Teso sub-region – as in most of northern Uganda - are owned by ruling party politicians who fear being viewed as government critics.

The RDC of Soroti district, Joseph Osoto, disagreed with the listeners’ views.

“I am not aware of any point where the office of the RDC has come out practically to block the airing of human rights programmes, or to stop radio stations from hosting opposition politicians,” Osoto said.

According to him, during campaigning for the February 2011 presidential elections, opposition leader Kizza Besigye was hosted on most radio stations based in Soroti and neighbouring districts.

“We had a directive from government during the campaigns asking us to desist from any political manoeuvre, so we couldn’t have interfered with who the stations hosted or [which] programmes they ran,” Osoto added.

The airing of the IWPR programme also prompted many listeners to call in to Voice of Teso. Goretti Egoru, a listener who called while the show was on air, noted that in the absence of compensation for those who lost their families in the Mukura fire, the memorial would only have negative connotations for the survivors.

Egoru pointed to a need to compensate families that lost their loved ones to enable them get over the pain, so they can begin “to look at memorials positively”.

She added that if compensation was not made, “memorials will be looked at negatively by those who lost their beloved ones”.

“Most people want to be compensated, but there is no sufficient debate about this matter,” said Dennis Elimu, a participant in the debate.

According to him, the issue has been “politicised” and people who did not lose any relatives have received compensation simply because they are well-connected politically, while the real victims have not received any assistance.

Others attending the IWPR debate said that erecting a memorial on its own was insufficient and instead recommended providing something that could benefit affected communities, such as a health centre or a school.

According to another listener, Kenneth Otim, the Facing Justice programme on memorials has triggered a long-awaited public dialogue about bringing justice for those killed in the Teso region.

“People are waiting to be [prompted] to debate,” he said. “Right now they talk about these things, but only in their drinking clubs.”

Frances Akello, a minister in the Iteso Cultural Union in Soroti, told IWPR that those who lost relatives would also like to see their assailants brought to book. According to her, memorials in northern Uganda hold limited value when those who carried out the killings have not been identified and punished.

“The problem is that the government has [put] little effort into building confidence in people [that the government is providing justice]. So the Mukura people look at this monument and say, ‘We are remembering our people who were killed but the culprits are not mentioned,’” he said.

Where the government has built so-called memorial schools – which are intended to benefit war-affected communities – some participants complained that parents had to pay fees for their children to attend them.

Meanwhile, listeners welcomed the overall coverage provided by Facing Justice on issues of human rights and rule of law in northern Uganda.

Elimu said that the community in Teso was largely ignorant about their human rights.

“There are laws on human rights but people are not aware of them. The [Facing Justice show] should continue teaching them what they need to [fight for these rights].”

“There are few radio programmes that deal with human rights issues, and those which have been run have not lasted long,” she said.

“We would like to see that the [Facing Justice] programme run consistently to awaken people to turn from the tragedy [of war] to reconciliation and to pursuing development.”