Judges accused of bowing to political pressure after deciding that Kenya’s deputy president can stay away from most of his trial.

Judges accused of bowing to political pressure after deciding that Kenya’s deputy president can stay away from most of his trial. 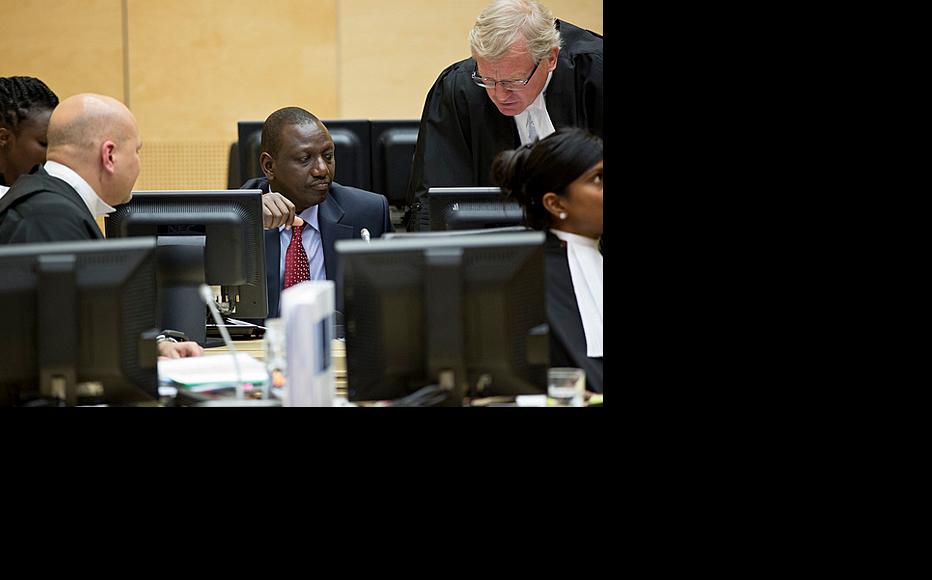 Ruto consults his lawyers during an ICC status conference in The Hague. (Photo: ICC-CPI/Flickr)
The link has been copied

International legal experts and human rights groups in Kenya have strongly criticised a decision by judges at the International Criminal Court, ICC, for their decision to allow the country’s deputy president, William Ruto, not to attend most of his trial in The Hague for crimes against humanity.

Some lawyers question the legal basis of the judges’ ruling on June 18, which permits Ruto to absent himself from most of the proceedings. He will still have to be present in court at certain key points, including the opening and closing statements by all parties, sessions at which victims of the crimes in question present their concerns in person, the judgement, and any sentencing hearings.

The judges issued their decision after Ruto’s lawyers requested that rather than their client having to be present in The Hague throughout the trial, he should be allowed to remain in Kenya so that he can attend to his duties as deputy head of state.

President Uhuru Kenyatta, too, faces trial at the ICC for orchestrating the bloodshed that brought Kenya to its knees following the disputed result of the 2007 presidential election. A third defendant, journalist Joshua Arap Sang, is similarly charged with responsibility for the violence which left 1,100 Kenyans dead and around 650,000 displaced from their homes.

One case, involving Ruto and Sang, is scheduled to start on September 10. Kenyatta’s will start on November 12.

Kenyatta and Ruto were elected in a presidential ballot held on March 4.

Rights groups are concerned that following the pressure put on the court and the international community by the Kenyan government and the African Union to halt the cases in The Hague, this decision gives the impression that the court is making concessions to the new state leaders.

The judges’ ruling stated that allowing Ruto to be absent from his trial “was strictly for purposes of accommodating the demanding functions of his office as deputy head of state of Kenya and not merely to gratify the dignity of his own occupation”.

“Few tasks are more important and extraordinary in their dimension as to have a principal role in the management of the affairs and destiny of a state and all its people, and their relationship with the world,” the judges wrote.

Prosecutor Fatou Bensouda has asked the judges for permission to appeal against the decision.

The decision has drawn criticism from legal experts who believe the judges have bypassed a clause in the court’s founding treaty, the Rome Statute, which states that defendants “shall be present during trial”.

Despite the provision, two of the three judges ruled that it was possible to grant an exception based on Ruto’s specific circumstances. The two – Judge Chile Eboe-Osuji and Judge Robert Fremr – emphasised the presumption of innocence and ruled that rather than enforce the provision, it was more important to do what is “fair, reasonable and just” under the court’s procedures.

The third judge, Olga Herrera Carbuccia from the Dominican Republic, disagreed with her colleagues and said the Rome State provision could not be ignored.

Danya Chaikel of the International Bar Association in The Hague questioned the judges' decision to apply a flexible interpretation to the rule that makes it plain that defendants “shall be present during trial”.

“In legal drafting ‘shall’ normally imposes a duty, not a right,” Chaikel said. She also that a second rule makes it a right for the accused to be present at trial.
.
“This means presence is both a duty and a right [for defendants], meaning a trial shall not carry on if an accused is not present, whether they wish to be so or not,” she said.

Chaikel pointed out that while the Rome Statute provides for suspects to be absent during the pre-trial stage of proceedings, there is no such provision when it comes to the actual trial.

“The drafters [of the Rome Statute] said suspects can waive their right to attend proceedings for pre-trial proceedings, so it seems highly unlikely that the drafters forgot to add a parallel provision for the trial phase,” she said. “Whether justified or not, the drafters of the Rome Statute clearly decided to include this duty to be present during the trial, and it is for the ICC’s states parties to amend if they decide to do so.”

The judges’ reasoning that Ruto warrants special treatment because he is deputy president has worried many legal experts.

The judges stressed that heads of state and other senior government officials were not immune from prosecution at the ICC, but said this did not prevent concessions being made on the grounds that a defendant was in public office. They cited “the traditional concern of international law to avoid undue hindrance of heads of state and senior state officials in their performance of legitimate functions on behalf of their states”.

However, lawyers are concerned that taking Ruto’s new status as deputy president into account violates another provision in the Rome Statute that says the court will treat all defendants equally, with no exceptions for those in senior government positions.

Judge Herrera Carbuccia disagreed with her colleagues on that point, too.

"Mr Ruto should not be given a different legal status on the basis of his personal position as deputy president of the Republic of Kenya," she wrote.

According to Chaikel, Ruto is no different to other defendants who come before the court.

“All suspects and accused persons sacrifice employment and personal commitments to attend trials that can go on for years and years,” Chaikel said. “To say this is a special case because of Mr Ruto’s political status seems to go against the principle that all accused persons are treated equally.”

Since Kenyatta and Ruto were elected, the Kenyan government has argued that the ICC cases are no longer valid, given that the two men have been democratically endorsed by the Kenyan electorate.

For its part, the ICC has gone to great pains to point out that the outcome of the March election will have no effect on the trials of Kenyatta and Ruto in The Hague.

Esther Waweru, legal affairs programme officer at the Kenya Human Rights Commission, says the new decision can only be interpreted as the court bending its own rules to accommodate those in powerful positions.

“The Rome Statute is clear that at the time of trial, the accused must be present throughout,” she told IWPR. “So for us, that decision can only mean that for so long as you are in high office, even the legal provision of the ICC can be twisted.”

Waweru points out that if Kenyatta were to make a similar request to the court, it would most probably be granted because the reasoning is analogous. That would leave Sang facing trial in The Hague on his own.

David Donat Cattin of the NGO Parliamentarians for Global Action argues that even if appeals judges uphold the decision to allow Ruto not to attend the trial, it is “very important” that they provide a sounder argument for doing so, in other words a different reason that would not appear to flout the Rome Statute.

“The appeals chamber should be very firm,” he said.

Donat Cattin believes that the seeds of the June 18 ruling were sown when pre-trial judges took a decision in March 2011 not to issue arrest warrants for the Kenyan suspects, who were instead asked to appear voluntarily before the court whenever requested to do so.

He believes that this “extraordinary situation”, where senior officials accused of mass crimes are allowed to remain at large, has placed the judges in a tight spot, and that they decided to grant Ruto’s request in order to secure his further cooperation with the ICC process.

“[The judges] sort of gave in partially to this request to keep this presumption of cooperation valid,” Donat Cattin told IWPR. “With this decision the majority of the judges are saying, ‘Let’s see how far we can go in ensuring the full cooperation of the accused.’”

So far, all three accused have pledged to cooperate with the court.

In Kenya, some suspect that the judges were swayed by the recent requests from the Kenyan government and the African Union for the cases at the ICC to be halted altogether.

“It appears the court is finally curving to political pressure,” Godfrey Musila, an international lawyer in Nairobi, told IWPR.

“ICC judges only consider the merits of an application and cannot be swayed by political declarations. ICC proceedings are purely a judicial process,” El-Abdallah said. “No one can be above the law simply because they won an election. The excusal was simply to accommodate the demanding functions of his [Ruto’s] office.”

The decision has also led some to worry about its impact on the process of justice more generally in The Hague. Chaikel fears the decision could diminish the quality of justice meted out in the Ruto case.

“If the accused isn't in court during the presentation of evidence and he isn’t addressing issues as they come up, how is this going to affect the completeness of the evidence, since the judges may not hear the accused’s full version of the events?” she asked.

Others believe Ruto’s absence will make those who suffered in the post-election violence less confident that justice is being done.

Phil Clark, an expert in international justice at London School of Oriental and African Studies, told IWPR that “a trial without Ruto attending in person will certainly be devalued”.

Victims groups in Kenya have been similarly critical.

“We are asking the appeals chamber to overturn that ruling,” Ken Wafula, who heads the National Association of Human Rights Activists, said. “Ruto should be made to attend his trial for justice to be done. He has to be present in court.”

Clark also sees wider dangers that go beyond the two Kenyan cases, particularly where other senior figures indicted by the ICC have been uncooperative.

Most African states with cases before the ICC, he argues, “have only cooperated as much as they needed to, to get the results they wanted”.

Bowing to leaders’ requests for special treatment in order to secure their cooperation could be a slippery path.

“This [decision] highlights the inherent weaknesses of the ICC, especially when faced with African leaders who are extremely savvy when dealing with inexperienced outsiders,” Clark said.

Felix Olick is a reporter for ReportingKenya.net and The Standard newspaper in Nairobi. Simon Jennings is IWPR's Africa Editor.