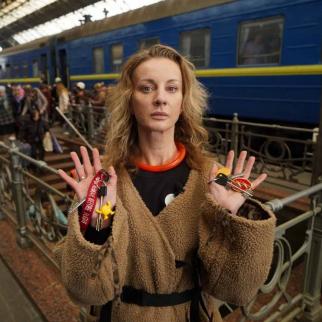 Mariupol’s True Horror is Yet to Emerge

“To understand what's happening, you have to multiply Bucha and Irpin and Borodyanka a hundred times.” Askold Kvyatkovsky (left) and his friend Artem Alifirenko.
The link has been copied

The Ukrainian city of Mariupol, with a population of 440,000, has been under siege by the Russian army since March 1. Although most residents managed to leave, thousands remained in bomb shelters under heavy rocket and artillery fire. Local musician Askold Kvyatkovsky and his friend Artem Alifirenko told IWPR contributor Maryna Myronenko how they volunteered to hundreds of local people to safety.

When the full-scale war began, electricity, gas, water, and heat were turned off in Mariupol. All shops, grocery stores and chemists were looted. The city is deserted. Everywhere they bombed, planes and rockets flew. I've seen houses torn apart the way you tear paper with your hands. I was shocked.

I am a musician and before the war, I managed a successful event agency. As an event host I always had good diction, but I began to stutter.

My family owns two apartments in the city, and both have been destroyed. Twice, I miraculously survived. After a night in the local cinema's basement, I decided to leave the city. It was March 14.

My friend Artem Alifirenko supported me. We put our families in our Volkswagen Transporter van and drove away. The car was badly damaged by shrapnel; the windshield was so cracked that we could not see the road properly. And on the road lay anti-tank mines that we needed to drive around.

Our happiness knew no bounds when we got to the nearest village. There was water in the well, and kind people bathed us, gave us clean clothes, and lit the stove. We had forgotten about these elementary benefits of civilisation.

Even though we were already safe, I woke up at 3:30 in the morning. In Mariupol, planes flew in every day at this time and bombed the city. This is the worst time because you are powerless. Today Russian bombs destroy your neighbour's house, and tomorrow it will be yours. I felt a terrible sense of guilt that I was safe, and there were people left in danger in Mariupol. I had an irresistible desire to return.

There was another reason as well. When we left Mariupol for the first time, two grimy, scrawny girls four or six years old came out of the basement. One girl had a teddy bear under her arm. And the other one had a live emaciated cat who didn’t even meow. The cat and the soft toy were equally grey, dirty and grubby. And these girls asked me, "Will you come back for us?" I replied that I would.

So my friend Artem and I began to take people out of Mariupol to neighbouring villages, also in Russian-occupied areas. Residents of one village allowed us to accommodate people in the school. They also provided heating. We did all this in secret because the Russians could arrest us for this or do something even worse.

And so it was, day after day. First we took people using our van, then we found a bus, then two buses. In the end we had three vehicles - a small caravan.

Gradually, 120 people gathered in this school in the village. It was necessary to take people to a safer place somewhere, away from the Russians. We learned about another shelter in Zaporizhzhia for people from Mariupol. To get there, we had to pass many Russian checkpoints, but we succeeded.

Once our buses were hit by shrapnel, we had to look for new ones. And some stranger just gave us a bus, just gave us the keys, with no money.

But the most difficult thing was to persuade those who were afraid to leave. Many people were so afraid of bombs that they were ready to stay in the basement without food and water, but not to go. It takes a lot of work to persuade them.

To enter Mariupol, one had to go through about 20 checkpoints in one direction and the same number back. In total we made seven such trips. We crossed the checkpoints about 250-300 times, and each time I composed a new fairy tale for the Russians to explain where I was going and why I was taking so many people: for example, that I went to Mariupol to get my family and did not find them but agreed to drop 100 people along the way. Or that people themselves climbed into my bus, I won’t kick them out. Or I said that all this is one family, just a very big one.

I never took money for saving people from Mariupol. We also never went as a “taxi” to addresses, although there were tempting offers to pick up a specific person or two and get 2,000 US dollars. But I was always faced with a choice: to pick up these two [for money] or pick up 50 people from the bomb shelter for free. And of course I went to the bomb shelter.

We chipped together in for fuel and food, the people of Mariupol themselves. I posted my wife's bank card number on Instagram so people could help my family, because I feared I might not return from another trip.

The Russian soldiers did not believe that I was taking people for free. Sometimes at the checkpoint they shouted at people, "Tell me how much money he took from you?! If you don't tell me, then you won't go any further!" Later, the soldier told me that if he had been told that I was profiting, I would have been shot at the same checkpoint. Russians believe that if a driver earns money, then he is a criminal.

Me, my friend Artem and two more volunteers who joined later took 700 people out. It seems that we were the first who began to take people out en masse. It was very risky, but I'm happy that we made it.

Alas, after many trips to Mariupol, the Russian counterespionage unit knew about Artem and me. At the last checkpoint, Russian soldiers warned us that this time we must leave our hometown forever.

I often remember the faces of these hundreds of people. I took them out, but I could not take my own father out. At first he, like many people of a more advanced age, refused to leave. And then he fell ill with diabetes, treatment did not help and he was buried in the front garden under the balcony of his own apartment.

Have many people thanked me? Eight. But I understand why that is so. In Mariupol, in basements, people gradually lost their common sense. They were scared, dirty and hungry. They won't be able to recover for a long time.

I still do not believe that my beautiful city does not exist. I cannot comprehend that I have seen so many dead people. I cannot accept that someone can shoot at high-rise buildings where people live.

It seemed to me that we had defied death and were tearing these people out of her hands, that we create a balance of good and evil with our actions. They kill people and we save them. It's not like a movie, there's no music behind the scenes, and there's no superhero stuff here. We just fixed what was wrong.

Now my life, unfortunately, has to continue outside of Mariupol. We deliver humanitarian aid and evacuate people from other dangerous regions.

But you know what? There are other drivers who continue to take people out of Mariupol.

Maryna Myronenko is the pseudonym of a Ukrainian journalist.