How I Voted No to a Donetsk Republic, Four Times

How I Voted No to a Donetsk Republic, Four Times 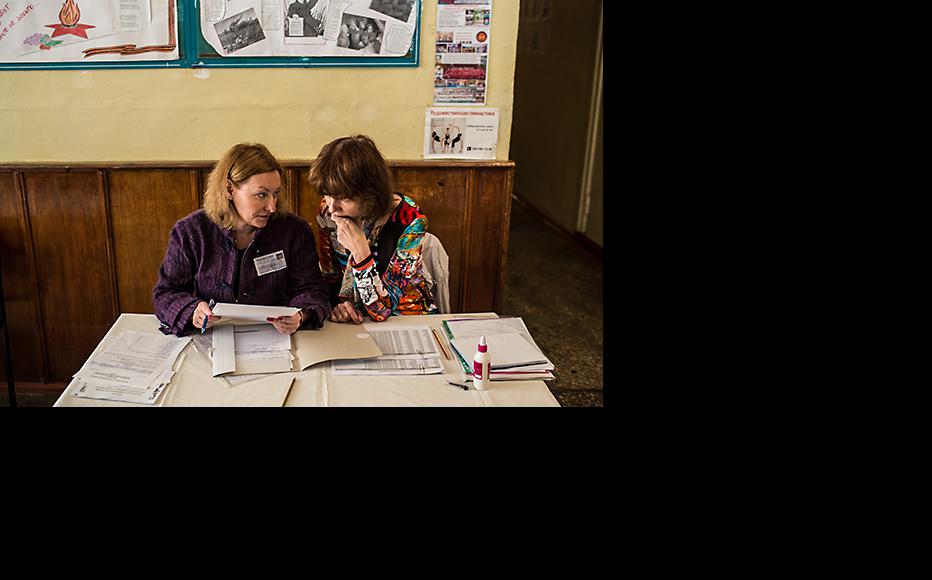 Poll workers confer at a voting station on May 11, 2014 in Donetsk, Ukraine. (Photo: Brendan Hoffman/Getty Images)
The link has been copied

In the morning I called on my neighbours to go and vote in the Donetsk People’s Republic referendum. To my surprise, they refused. A young couple, both 25 – she makes fresh juice in a supermarket and he’s a builder – they had previously tried to convince me of the need for a federalised Donbas, but here they were, ignoring it.

My neighbours had a clear explanation – if it had been a real referendum, they would have gone, but this one had been manufactured by unknown outsiders, and that wasn’t what people needed.

So off I go alone to the Donetsk polling station I selected earlier.

It’s 09:00 at School No. 60 in Kuybyshev Street in the Smolyanka area. There aren’t many people, no more than five at any one time, but as one person leaves, another one comes in. Contrary to my expectations, there is no one in camouflage with a weapon. There aren’t even any police.

I ask how one goes about voting if one isn’t registered as resident in the district. It turns out to be easy; all I have to do is show my passport and I’ll be added to the supplementary list. (I used to be registered in Donetsk, but I’m not now.) And that is what happens. My lack of registration isn’t a problem. They give me a ballot paper that has been amateurishly photocopied on normal office stationary.

It has a lot of stuff in Russian and Ukrainian, but the basic text reads, “Do you support the Act on State Autonomy for the Donetsk People’s Republic?”

I ask for a second ballot paper so that I can vote on behalf of my wife (I don’t have one). But they ask me to produce her passport. The elderly woman behind me is luckier. She has come along with all her family’s passports, so she can make a choice about the future for her grandsons as well as herself. She is given as many ballot papers as she has passports.

In the voting booth, I put a tick in the “no” box. I am surprised to see that the ballot box is already about one-fifth full. Given the activity I have seen here, that number of votes could not have been achieved before six in the evening.

I leave and head off to another polling station.

09:25, at the Kuybyshev Culture Palace on Panfilov Street in Smolyanka. This polling station is a bit more lively than the last one, but there’s still no queue. This time, my name and date of birth are entered on the main list, not a supplementary one. Naturally, there is no electoral roll at either polling station, so the lists are drawn up by hand on the spot, as people produce their passports.

I ask for an extra ballot paper “for my wife”. Her passport is not required here. All they need is her name and date of birth, which I make up. There are no voting booths here. I put a tick for “no” on one ballot paper and pocket the other one. I move on.

09:55. School No., 17, Oreshkov Lane in the city centre. This school is very near the separatist-controlled regional government building. It is unusually busy outside the school entrance, but this turns out to be the press, judging by the many nations they represent. Inside, the picture looks ideal for Russian TV stations – real queues lining up at the “election commission” members’ tables.

Once again, passport details are noted down by hand – and that is in the city centre, which is more densely populated than the working-class Smolyanka. Processing each voter takes between three and 15 minutes – the latter when they have several passports. I have to wait half an hour in the queue, but I don’t have trouble getting a second ballot paper for “my wife”, with no passport needed. I mark one of them “no” and put the other in my pocket.

What I am most surprised by is that there are many times fewer papers in the two ballot boxes here, taken together, than at the polling station at School No. 6 in Smolyanka which I had visited half an hour earlier. The malign influence of the large press presence is clearly at work. It wouldn’t be great to be stuffing extra papers into the ballot box in front of the cameras.

10.50. School No…. I won’t give its number or address as it is near our editorial offices, but it is in the city centre. There are far fewer people than in the last one, the heartland of separatism. There is no need to queue. I am asked to fill in an application to be entered in the supplementary list. They refuse to grant the same right to my “wife”. I get a ballot paper and mark it “no”. I see that about as many people have voted here as at School No. 17, with its busy queues.

At 12.30 I return to this last polling station. There is almost no one there. It has missed out on activity. The number of ballot papers in the boxes has hardly changed. But then it isn’t yet evening, and I am sure that by close of polling, turnout will be 150 or 200 per cent. No one knows, after all, how many voters there should be, who has a right to vote, and who has a right to cast any number of ballots.

I end up with two home-made ballot papers in my possession, which I could take to any photocopying centre and turn into 1,000 or 10,000 absolutely identical copies. I could open my own polling station. They have done that in Mariupol and Krasnoarmeysk, in the streets near the markets. Come along and vote. I won’t even ask to see your passport. Why would I?

This article republished from Novosti Donbassa with kind permission. Original article in Russian.

Ukraine
Conflict
Connect with us