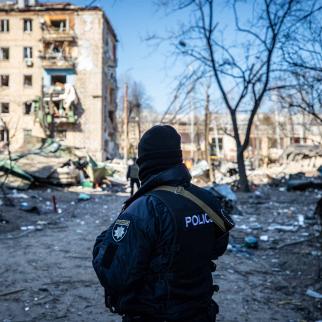 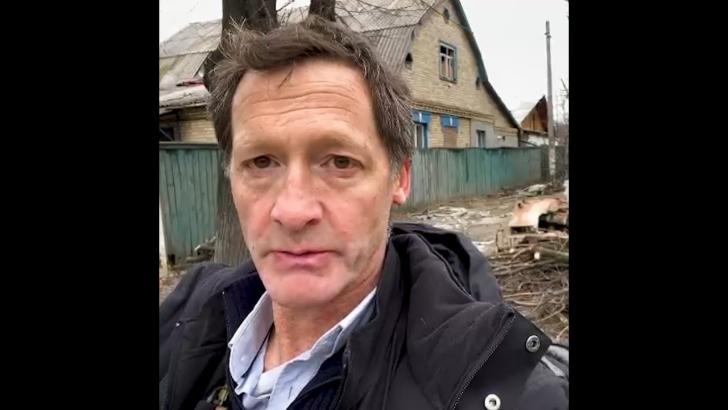 "Bucha will always be synonymous with war crimes." Ukrainian official works on cataloguing some of the 58 bodies of civilians killed in and around Bucha before they are transported to the morgue at a cemetery on April 6, 2022 in Bucha, Ukraine. © Chris McGrath/Getty Images A house lies in ruin on April 4, 2022 in Bucha, Ukraine. Dozens of bodies have been found in the days since Ukrainian forces regained control of the town. © Alexey Furman/Getty Images 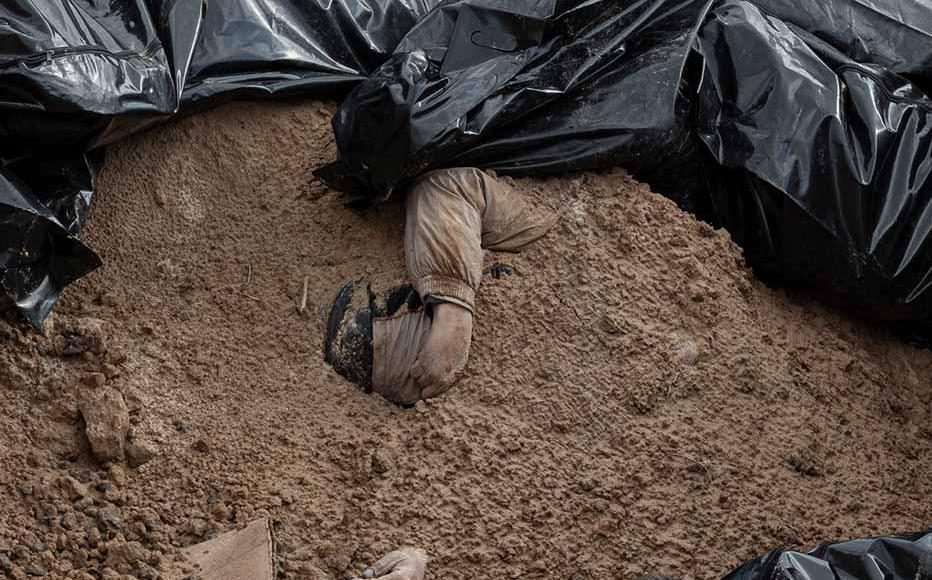 Bodies are seen inside a mass grave on April 4, 2022 in Bucha, Ukraine. © Alexey Furman/Getty Images 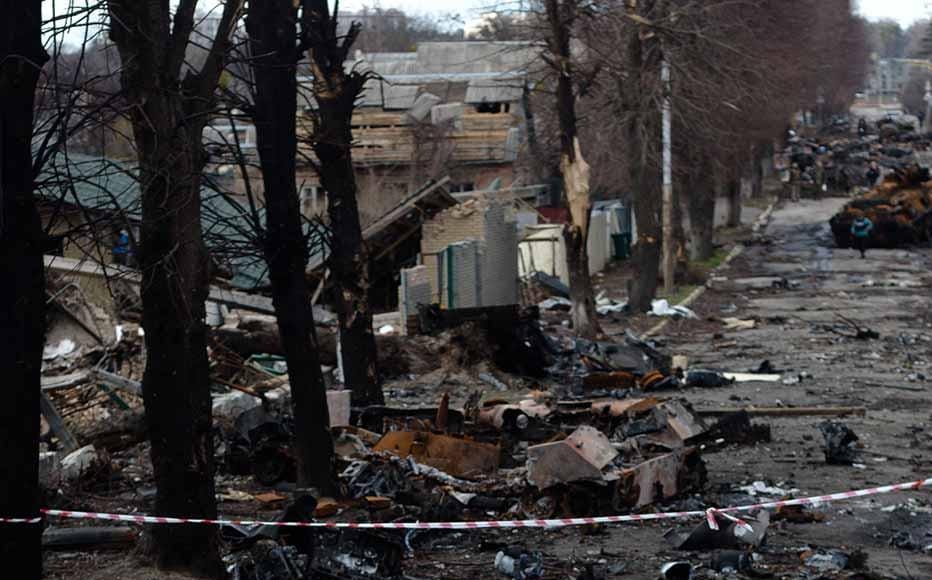 Ukrainian servicemen walk in the destroyed street on April 4, 2022 in Bucha, Ukraine. The Ukrainian government has accused Russian forces of committing a "deliberate massacre" as they occupied and eventually retreated from Bucha, 25km northwest of Kyiv. © Anastasia Vlasova/Getty Images
The link has been copied

Bucha is a ghost town. The few scattered residents of this devastated suburb city outside Kyiv share a blank, distant stare that speaks of the terror they experienced during weeks of Russian occupation.

“The artillery and shootings were 24/7,” said Dmytro Zamohylnyi, 56, standing in front of his house on Vokzalna street, littered with destroyed Russian armoured vehicles.

“We couldn’t leave our house for the entire time. Only when the Russians left, on March 31, could we see the dead bodies. In a radius of one kilometre around my house we found around 15 bodies – all civilians, no military guys.”

In front of his house, the wreckage of army vehicles stretched for a quarter of a mile, rusted hulks of vehicles, overturned and burned, smashed equipment everywhere, silver trails of molten weaponry, long cooled. Many houses had been entirely reduced to rubble.

The town is now being cleaned up, the bodies scattered and decomposing everywhere removed.

Yet even as a group of journalists walked over the area, viewing the wreckage, I nearly stumbled over a boot laying on the pavement amid all the other detritus of war – little remarkable about it until I realized that inside there was still a foot. Life was cheap in Bucha.

We heard of whole families shot in the back of the head, hands tied behind them, lying in a basement rotting. Corpses left on the streets, in backyards, in basements, wherever they were killed.

“It was hard for me to identify the corpses because I couldn’t look in their faces.”

In impacted areas, every single home was looted, and not just robbed but thoroughly smashed and stripped. Literally emptied: what were a few weeks ago full and happy dwellings, now utterly bare as if they were never occupied.

Front doors torn off their hinges, and every single pane of glass shattered, so you spend a large percentage of your time walking on splintered shards everywhere.

“The first thing the Russians took was the mobile phone,” said Zamohylnyi, in front of his house. “They interrogated me and searched the entire house. Everything: under the beds, attics, every corner. They were robbing my neighbours’ houses outrageously. When I went there to check, everything was upside-down there. All the wardrobes, everything was scattered around and messy.”

“Russians came and shot our dog,” said another resident. “They told us it’s nothing comparing to the dead people lying over there, so we should think we are lucky. They thought the dog could be some kind of a threat, so they simply decided to shoot it.”

The stories residents tell are similar, an accumulation of unconnected testimonials to the same behaviour, repeatedly, across the town – random and unaccountable violence against any civilian at any time for no apparent reason.

Zamohylnyi did not leave his home until March 31, when the Russians withdrew, and only then did the scale of the killings became apparent.

“It was hard for me to identify the corpses because I couldn’t look in their faces,” Zamohylnyi says. “They had been lying there for pretty long when I saw them. It was very unpleasant to look at them. Some were already blackened. Some had their eyes out. There were birds flying over them.”

Oleksandr, a resident waiting outside in the cold with a large group of residents for food aid, recalled how in mid-March, when he went upstairs to try to get a mobile phone connection, he had seen his neighbour’s body in the yard, face down. It would be two weeks before it was safe enough to leave the house to be sure who it was, but by then the face, smashed in and discoloured, was unrecognizable.

“Some nights there were so many fires that we didn’t need a torch because everyone was lit up,” said Nina Burliay, another resident.

She said that a man she knew personally was killed near her house next to the train station. He was shot dead by Russian soldiers while collecting sticks for a fire. Neighbours took his body and buried him in a football field nearby. On my visit, Ukrainian authorities took a group of journalists to a pit in a yard behind a secluded pleasant area, shaded by tall pine.

Dmytro Andreev, a professor of law in the national police academy and a spokesperson for the Kyiv regional police department, said the pit had only been discovered the night before. He said the bodies had not been moved. Little yellow numbers, 1-6, were placed by each of the corpses for photograph and further identification.

The remains were then transferred to body bags, torses and limbs in some cases separating, and taken away.

According to Oleksander Zakletsky, a former National Geographic photographer now working as Ukrainian military photographer, the eldest was 40, the youngest maybe a teenager. At least some had evident bullet wounds. The working supposition is that they were all killed separately in the area and brought to the pit for burning, with petrol poured over them.

This was an unseemly moment – revealing bodies to an assembled press and enacting a somewhat uncertain quasi-forensic (and imprecise) act to underline that we were looking at a crime. There is global interest in the story, which the authorities are clearly seeking to satisfy and mobilize. But the theatre was not necessary.

What happened in Bucha must be a war crime. There are too many civilians with too similar a range of stories to indicate anything otherwise. These must all be collected, carefully and in extensive detail, all within a judicial process.

Russian soldiers will have confiscated phones not only to prevent communications – although cell phone connection is not good in the town – but almost certainly to also deprive people of cameras.

Yet there is a large body of evidence to confirm that occupying forces – including Chechens, whom the residents said were especially brutal – perpetrated a vast range of wanton violence against the civilian population: shootings, beatings, almost certainly rape.

External resources will also be critical, with satellite imagery confirming that bodies lay out for weeks. But residents, those in the town and many who will have left from the population of 36,000, will all testify the same.

Above all, it is the complexity, variety and dispersed locations of all of the killings which suggests they cannot be anything but true. This is not one staged killing, a mass event, one story. It is the accumulation of countless stories told individually and separately by so many random citizens – essentially anyone you meet on the street – that gives confidence in the overall story.

One light green house struck me as especially mournful, elegant and well proportioned. I filmed its broken door, bullet marks on the walls, and the ever-present curtain, drifting through open glass in the wind.

As I turned away, Zakletsky, the former National Geographic photographer, told me that they had found two bodies in that home yesterday, including one with gunpower marks on his face, indicating a close firing, an execution.

The aftermath of Bucha will take years of investigation and prosecution, of healing and rebuilding. The process will take time and huge resources.

But what is absolutely clear is that the revelations from this devastated town marks a turning point, and the name of Bucha will forever be associated with crimes of war.