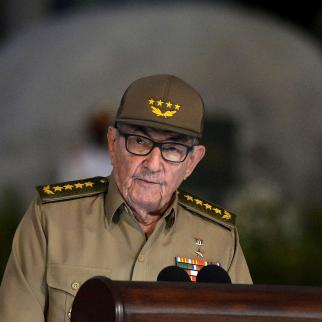 Raul Castro, gives a speech on January 1, 2019, during the celebration of the 60th anniversary of the Cuban Revolution at the Santa Ifigenia Cemetery in Santiago de Cuba. © YAMIL LAGE/AFP via Getty Images 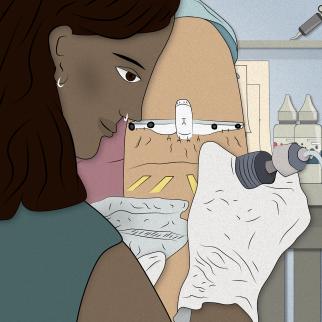 A whole generation of fledgling entrepreneurs have been trapped by uncertainty. 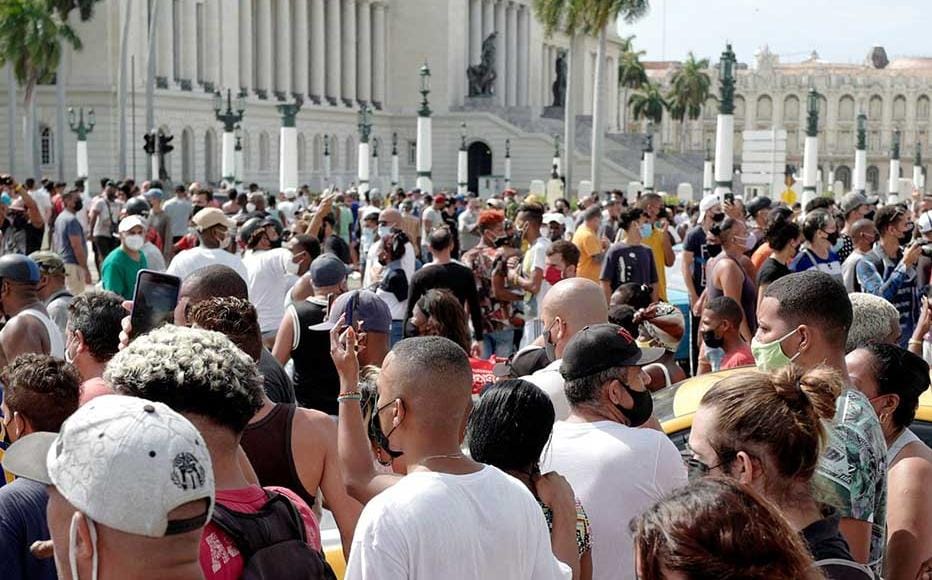 People take part in a demonstration against the government of Cuban President Miguel Diaz-Canel in Havana, on July 11, 2021. © ADALBERTO ROQUE/AFP via Getty Images
The link has been copied

The whereabouts of several high-profile opposition activists in Cuba remain unknown following the regime crackdown against the unprecedented anti-government protests that swept the island this week.

The unrest comes amid a recent surge in Covid-19 cases and a worsening economic crisis that has further fuelled rampant shortages of food, medicine and other basic goods.

The protests began on Sunday July 11 in San Antonio de los Baños, in the western province of Artemisa, and soon extended to other municipalities including Santiago de Cuba, Mayabeque, Camaguey, Holguín, La Habana and Villa Clara.

According to Inventario, a Cuban digital magazine specializing in data journalism, some 50 peaceful demonstrations were held across Cuba that day.

Thousands participated in each of these protests, with social media believed to have played a central role in getting people out on the streets. The demonstrators chanted anti-government slogans including “Homeland and Life,” the title of a song that has become the symbol of Cuban resistance in recent months, as well as also directly criticising the country´s president, Miguel Diaz-Canel Bermudez.

The Cuban government were quick to react. Shortly after the first demonstration, Díaz-Canel took a televised walkabout through through the streets of San Antonio de los Baños accompanied by bodyguards and regime supporters.

That afternoon, Diaz-Canel went on national television to attack the protests as a US provocation. While he acknowledged that “citizens who might have concerns”,among the protesters, he warned that his government would use a firm hand against what he described as “counter-revolutionary mercenaries”.

“We are not going to surrender our sovereignty, the independence of our people, or the freedom of our nation,” he said. “I confirm that there are plenty of revolutionaries in this country who are willing to give their lives to defend our ideals. The combat order is out now. To all revolutionaries, take to the streets.”

Indeed, regime forces soon moved in to disperse the protestors, with reports of beatings and injuries from bullets. Among those currently missing are Luis Manuel Otero Alcantara, the best-known face of the San Isidro Movement,  José Daniel Ferrer, leader of the dissident umbrella group the Patriotic Union of Cuba, and activist Guillermo Fariñas.

In recent weeks, Cubans have experienced many hours of repeated electricity blackouts, as well as severe shortages. Emergency economic reforms instituted early this year have triggered a devaluation of the country's currency, a rise in inflation and an increase in the prices of almost all essential goods and services.

The country is also now undergoing a severe health crisis, with the highest rates of Covid-19 in the region – 515 cases per 100,000 people in the last two weeks, according to official data.

Videos circulated on social media showing sporadic acts of vandalism, such as the looting of the El Encanto shop in Güines, in Mayabeque province, where local residents entered and took food and other products.

El Encanto is one of the shops known as MLC, selling products only to people with a bank account in US dollars or euros. These shops, run by a business conglomerate owned by the Cuban army, have proliferated since the middle of last year. They aim to acquire foreign currency to alleviate the crisis caused by the collapse of Cuba’s two main sources of revenues: tourism and trading with Venezuela.

However, the MLC shops also created massive social discontent because they further deepened the division between those who receive remittances from abroad and those who rely on local sources of income. It has also created a shortage of essential products for people who can only buy in shops charging in Cuban pesos.

Cuba has not seen protests like these since August 1994, when hundreds of people took to Havana´s seawall El Malecón – in what was  called the “Maleconazo” –  to protest a previous economic predicament.

Those protests were also shut down by a harsh response, but sparked the so-called Rafters' Crisis, which saw thousands of Cubans fleeing to Florida.

As during previous unrest, internet users in Cuba reported service interruptions in several parts of the country throughout the day. Social media outlets play an increasingly important role in Cuban peoples’ lives, and the protests were echoed online with expressions of international solidarity using the #SOSCuba and #SOSMatanzas, calling for the setting up of a humanitarian corridor to the country.

US President Joe Biden also expressed his support for the Cuban people and their demands.

“The United States of America call on the Cuban regime to hear their people and serve their needs at this vital time rather than enriching themselves,” he said.

“In an historic day of protests, the world is bearing witness as thousands of Cubans take to the streets to call for an end to dictatorship in their country,” the chairman of the US senate foreign relations committee, Cuban-American senator Bob Menendez, said in a statement. “Despite ongoing persecution on the island, Cubans are bravely joining to demand nothing more than the ability to live safely and speak their minds freely, openly, and without fear.”