Gunfire as Extension of Politics on Azeri-Armenian Border

Mutual recriminations as both sides note a rise in cross-border shooting.

Gunfire as Extension of Politics on Azeri-Armenian Border

Mutual recriminations as both sides note a rise in cross-border shooting. 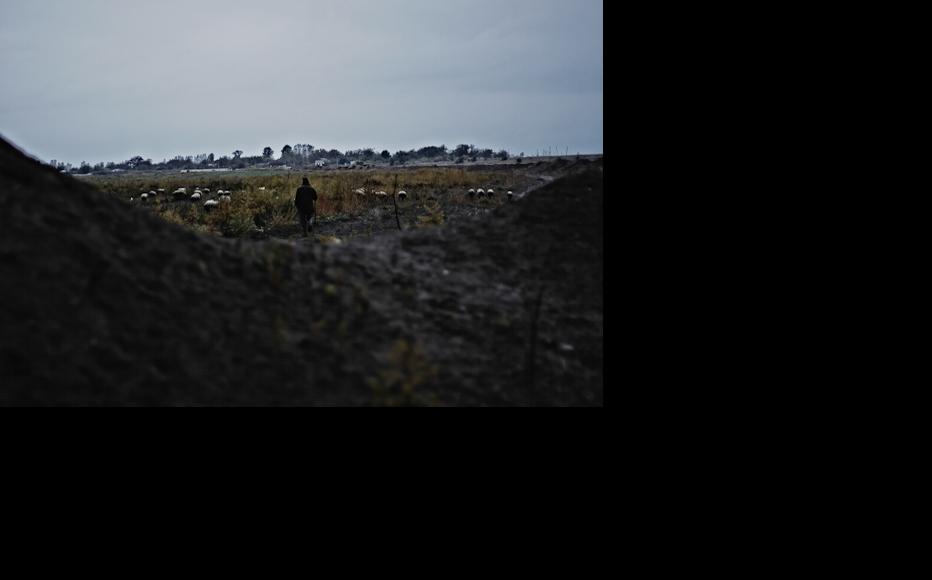 A shepherd pastures his flock in no-man's land between Azerbaijani and Armenian forces on the Karabakh front line. (Photo: Orhan Orhanov)
The link has been copied

While cross-border gunfire involving Azerbaijani and Armenian force is all too common, a recent sharp increase in incidents has left analysts wondering what is going on.

The consensus is that the skirmishes are not a precursor to wider hostilities. Instead, commentators on each side believe they are a reflection of domestic political problems in the other country.

As an illustration of the rise in shooting incidents, Armenian defence officials said that one soldier died and six were injured in August, whereas there had been no casualties in July.

The incidents happened on Armenia’s eastern border with Azerbaijan, on its southeastern frontier with Nakhichevan – an Azerbaijani exclave territory – and on the “line of control” around Nagorny Karabakh.

“This isn’t reconnaissance, nor is it designed to improve their position, or to prepare for sweeping military operations,” he said. “The Azerbaijanis’ aim is to inflict as much harm as possible on our military personnel.”

In Azerbaijan, officials said it was the Armenians who started or at least provoked the shooting. The defence ministry said its monitoring indicated that most of the gunfire was taking place around Karabakh and on the border with Nakhichevan.

Defence ministry spokesman Eldar Sabiroglu said the Armenians were trying to divert public attention from their government’s own failings.

“We know that Armenia’s domestic affairs are in bad shape. People express their unhappiness with the authorities every day. In order to mitigate this, they [authorities] try to project attention onto Azerbaijan,” he said. “This is always going to be a problem. Armenia’s aggressive policy has not changed, so there will continue to be trouble on the front line.”

Sabiroglu also spoke about a particular incident in early August, on the border between Armenia and Nakhichevan. According to the Armenian account, one soldier was killed and a second injured by Azerbaijani sniper fire. But Sabiroglu described this as “an attempt by Armenia to divert attention from problems inside its own army”.

“They’re trying to cover up the fact that there was a shootout between Armenian soldiers, We have reliable information that several soldiers died and several more were injured in a shootout in an Armenian military unit deployed on the border with Nakhichevan,” he said.

A mirror-image view of the situation was articulated in Yerevan. Alexander Arzumanyan, a former foreign minister of Armenia, said the clashes were being instigated by Azerbaijan, where the authorities are keen to ensure the re-election of President Ilham Aliyev next month.

“The Azerbaijanis have resorted to deliberately escalating tensions on the border ahead of general and presidential elections on more than one occasion,” he said. “It’s the familiar policy of the Aliyev clan – dictatorships always need an external enemy.”

Arzumanyan pointed to the widening military imbalance between oil-rich Azerbaijan and less affluent Armenia. Baku continues to purchase high-tech weaponry, and President Aliyev and other officials often warn that if talks on the future of Karabakh ultimately fail, the army is capable of retaking it by force.

Armenian officials are clearly unsettled by this build-up, but hope their longstanding alliance with Moscow will safeguard them. (See Neighbourhood Watches as Azerbaijan Arms Up.)

Despite the threats coming out of Baku, Arzumanyan said, “the years go by, and the Karabakh problem remains unresolved”.

The Karabakh conflict ended in 1994 with a truce that has lasted ever since, despite the sporadic outbreaks of gunfire. Talks intended to produce a lasting settlement are mediated by the OSCE’s Minsk Group, chaired by Russia, the United States and France, but have failed to make significant progress. The Karabakh Armenian administration says it will never give up its claim to independence, while Baku insists that the ultimate solution must involve regaining control over its sovereign territory.

“There has been no substantive movement in the positions taken by the parties to the conflict,” Arzumanyan said. “Then again, Karabakh isn’t of such paramount importance to [external] states that it would prompt serious pressure [for a solution] from outside.”

Even with high levels of mutual mistrust and little apparent prospect of progress in the OSCE-mediated talks, commentators in Yerevan and Baku are not predicting that things will get out of hand.

“I do not think that the option of returning to war will be decided in Baku alone, so I see it as unlikely that Azerbaijan would go down that road,” David Shahnazaryan, former head of Armenia’s National Security Service, told IWPR. “What I mean is that a number of states are active in this region, and they are driven by they own interests and by the fact that they have a political, military and economic presence – there’s Russia, the United States, Turkey, the European Union and Iran. I wouldn’t say any of these countries wants to unleash a war in the South Caucasus.”

Zumrud Mammadova, a researcher at the Simulated Forecasts think-tank in Baku, agreed that none of the big players wanted conflict.

“Analysis of what’s going on indicates that neither Armenia nor Azerbaijan is preparing for war,” she added. “Each side wants to show its strength and insure itself against current and possible international responses to its domestic problems. Armenia and Azerbaijan are doing this to get round the international community’s demands for democracy.”

Dashdemir Aliyev, a retired lieutenant-colonel in the Azerbaijani army who now heads a veterans’ group, agreed with this point.

“Armenia and Azerbaijan have identical interests in this respect. Both want to show the international community that they face problems that are a lot more important than democracy, and hence ward off international pressure,” he said.

On the Armenian side, Shahnazaryan predicted that the use of small-scale warfare as a continuation of politics would continue.

“I believe tensions on the Armenian-Azerbaijani border will persist, rising and falling on a regular basis,” he said. “The situation that now pertains will continue for a long time since no new initiatives have emerged in the OSCE Minsk Group [talks] format.”

Jasur Mammadov Sumerinli is a defence affairs reporter with the Zerkalo newspaper in Azerbaijan. Vahe Harutyunyan is a freelance journalist in Armenia.