Kenyan president’s bid to get Hague case thrown out is rejected by judges.

Kenyan president’s bid to get Hague case thrown out is rejected by judges. 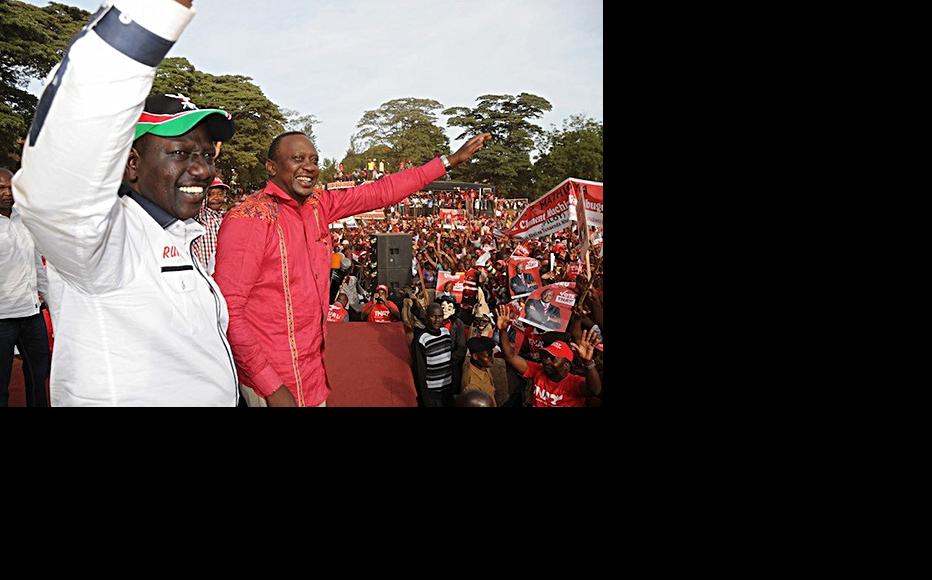 Uhuru Kenyatta (right) and William Ruto on the campaign trail (Photo: Capital FM, Nairobi)
The link has been copied

Judges at the International Criminal Court, ICC, have cleared the way for Kenya’s new president Uhuru Kenyatta to stand trial, although they have given strong hints that the case could suffer further delays.

In a ruling dated April 26, a panel of three judges in The Hague dismissed an application from Kenyatta’s lawyers for the case against him to be either terminated or sent back to the pre-trial stage, where judges would determine once again whether there was enough evidence to merit a full trial.

However, the judges made scathing remarks about the prosecution’s investigation methods, and agreed to provide the defence with more time to prepare for trial.

In a trial currently scheduled to start on July 9, Kenyatta is accused of orchestrating mass violence that followed the previous presidential election, held in December 2007. Kenya’s new vice-president, William Ruto, and journalist Joshua Arap Sang also face trial for the unrest in a separate case.

Both cases were due to get under way earlier this month, but in a decision taken in early March, judges delayed Kenyatta’s case until July and that of Ruto and Sang until May 28.

Kenyatta’s application to have his case thrown out or sent back to the pre-trial stage was founded on the argument that actions by the prosecution meant a fair trial was impossible.

Last month, the prosecution was forced to drop its case against a fourth suspect, former civil service chief Francis Muthaura, after a witness admitted lying to the court and prosecutors could offer no further evidence to support their allegations.

When pre-trial judges confirmed the charges against Kenyatta after hearings in September and October 2011, the prosecution was relying on evidence given by the same witness. It has since emerged that prior to the hearings, prosecutors failed to disclose to the defence a sworn statement given by the individual, known only as Witness 4, even though it contained exculpatory evidence relevant to Kenyatta.

The evidence related to a meeting at Kenya’s State House at which Kenyatta is alleged to have planned the post-election violence.

In their submission to the judges, Kenyatta’s lawyers said that inconsistencies in Witness 4’s testimony meant that like Muthaura, their client no longer had a case to answer. They argued that if pre-trial judges had had access to the sworn statement, and had thus been aware of the inconsistencies it threw up, they would not have sent the case for full trial.

In their April 26 ruling, judges ruled that the prosecution’s failure to disclose the potentially exculpatory information relating to Witness 4 ahead of the confirmation hearings had not “materially impacted” the decision to confirm charges.

They concluded that the defence’s application constituted “an impermissible attempt to have the chamber effectively entertain an appeal of the confirmation decision”.

In further submissions to the judges, Kenyatta’s lawyers asserted that since the case against their client was confirmed in January 2012, the prosecution had added “new and radically altered allegations" to it.

They submitted that prosecutors had dropped seven of the 12 witnesses they had presented at the confirmation hearings, while an additional 26 prosecution witnesses were interviewed only after charges were confirmed.

The lawyers argued that this amounted to a re-shaping of the case, and that this meant it should be sent back to pre-trial judges for confirmation before proceeding to full trial.

The judges responded to these arguments about new evidence and witnesses with a damning assessment of the way in which the prosecution has gone about its investigation.

They said that as far as they had been able to ascertain, at least 24 of the prosecution's 31 witnesses were interviewed for the first time after confirmation hearings took place.

“In addition, a large quantity of documentary evidence appears to have been collected post-confirmation and to have been disclosed at a late stage,” they noted.

However, the judges were not satisfied that the new materials “invalidate the confirmation decision and render a fair trial impossible”.

They pointed out that the important thing was that, even if the prosecution’s evidence had changed, the charges against Kenyatta remained the same as those confirmed in January 2012. They said they would therefore assess the relevance of any new evidence as proceedings unfolded.

“It is more efficient, expeditious and appropriate for the chamber to address these issues and evaluate the impact on the prosecution's case during the course of the trial, rather than refer the case to the pre-trial chamber for what would amount to a "fresh" confirmation,” they wrote.

Given the volume of new evidence held by the prosecution, the judges decided to give Kenyatta’s lawyers more time to prepare a defence case. While the July 9 start date still stands, they asked the defence to inform them of the amount of additional time it would need.

Despite rejecting Kenyatta’s bid, judges did not hold back from warning the prosecution to get its house in order. They were particularly critical of what they said was its “grave mistake” of not disclosing the contents of Witness 4’s sworn statement prior to the confirmation hearings. But they did not concur with the defence’s submission that this was done in bad faith, and concluded that it would be disproportionate to terminate the case against Kenyatta.

“The appropriate remedy is for the chamber to reprimand the prosecution for its conduct and to require it to conduct a complete review of its case file and certify before this chamber that it has done so, in order to ensure that no other materials in its possession that ought to have been disclosed to the defence are left undisclosed,” the written decision said.

The judges also raised concerns about prosecutors continuing with their investigations after the charges were confirmed.

“Although there may be no formal preconditions for the prosecutor to continue investigating the same facts and circumstances after they have been confirmed, this is not an unlimited prerogative,” they wrote. “The prosecution is expected to have largely completed its investigation prior to the confirmation hearing.”

In an additional opinion annexed to the decision, Judge Christine Van den Wyngaert delivered a further rebuke to the prosecution and the way it has gone about its investigations in Kenya.

“There are serious questions as to whether the prosecution conducted a full and thorough investigation of the case against the accused prior to confirmation,” Van den Wyngaert wrote. “I believe that the facts show that the prosecution had not complied with its obligations at the time when it sought confirmation, and that it was still not even remotely ready when the proceedings before this chamber started.”

In a separate decision released by the ICC on April 26, it was announced that Judge Van den Wyngaert would be replaced on the bench that will hear the two Kenya cases by Judge Robert Fremr with immediate effect.

Judge Van den Wyngaert had applied to stand down from the two cases on April 8 due to her heavy workload. She is currently hearing cases relating to the Democratic Republic of the Congo, Libya and the Ivory Coast. A second reason for her request was redacted from the public version of her submission.