‘Andre’, pseudonym of a Ukrainian officer, shows off a camp in sight of Mykolaiv, where 1,000 Russian troops assembled in late February, aiming for Odesa. The remains from a Ukrainian surprise attack are littered across the field, including a trophy Russian T-shirt. © Anthony Borden 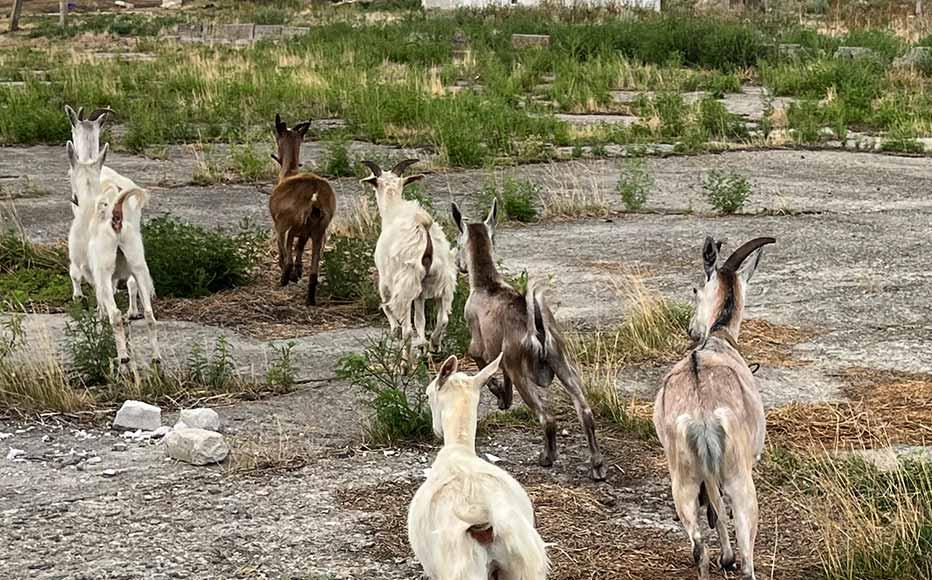 The road in Little Schevkenko, Mykolaiv oblast, may be to nowhere, but the village of 550, with 170 now remaining, is hit by Russian shells almost every day. © Anthony Borden 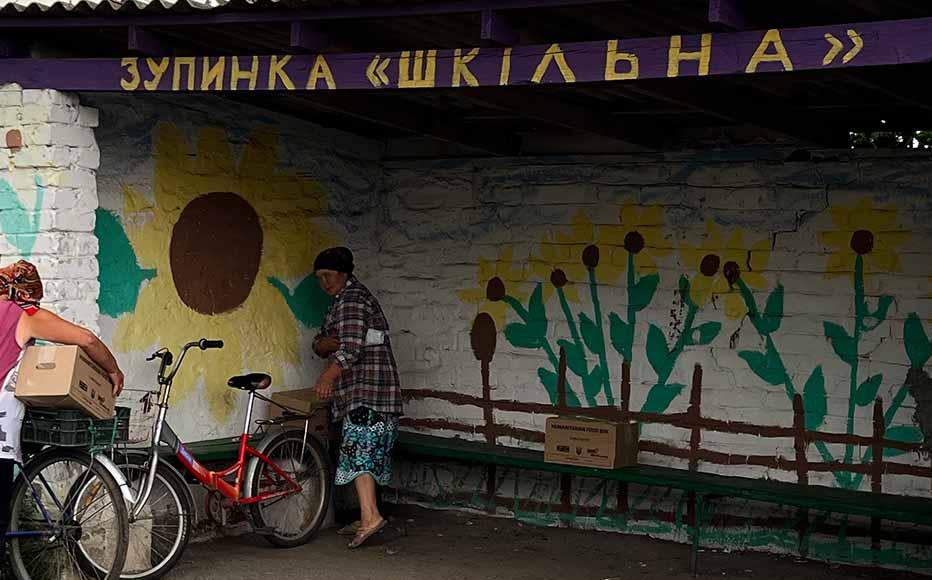 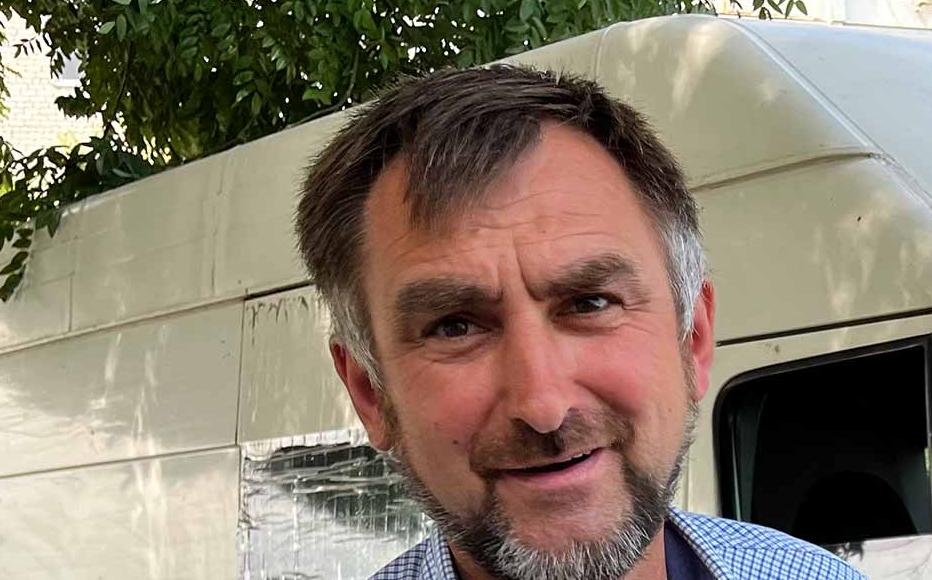 Father Andriy Stadovych collects food aid in Mykolaiv to deliver to outlying villages, with his diary listing the hundreds of beneficiaries and what they have received. © Anthony Borden 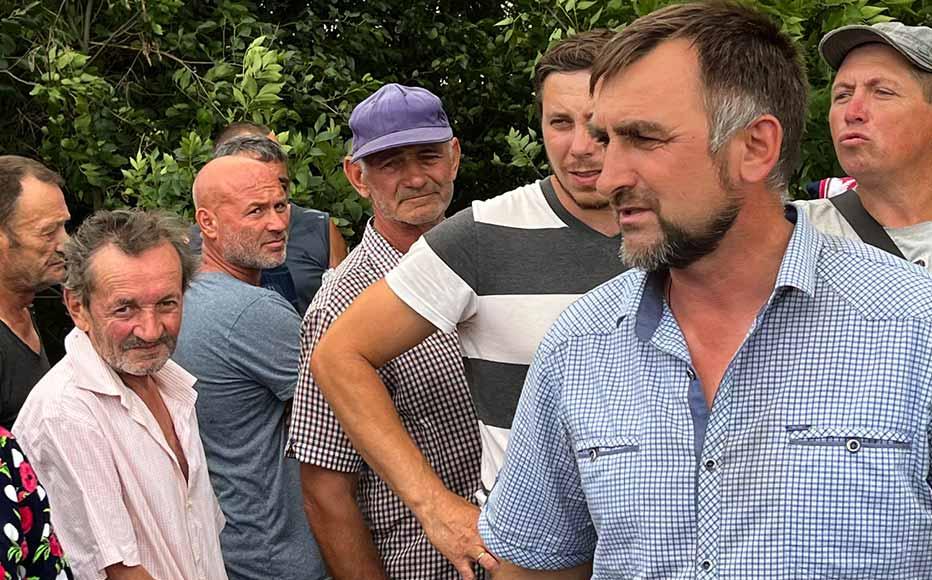 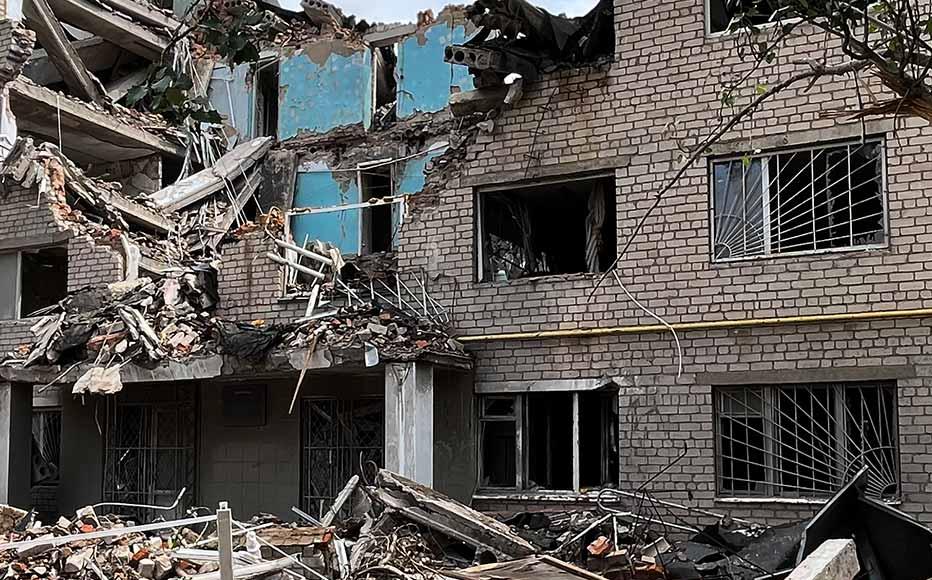 A residential building shelled in Mykolaiv. The exodus of more than half the population has saved countless lives, as targeting has increasingly hit structures in the centre. © Anthony Borden
Ukraine War Diary by A. Borden

Ghost Villages on the Mykolaiv Front

Few remain in what has become a sparsely populated no-man’s land.

‘Andre’, pseudonym of a Ukrainian officer, shows off a camp in sight of Mykolaiv, where 1,000 Russian troops assembled in late February, aiming for Odesa. The remains from a Ukrainian surprise attack are littered across the field, including a trophy Russian T-shirt. © Anthony Borden

The road in Little Schevkenko, Mykolaiv oblast, may be to nowhere, but the village of 550, with 170 now remaining, is hit by Russian shells almost every day. © Anthony Borden

Father Andriy Stadovych collects food aid in Mykolaiv to deliver to outlying villages, with his diary listing the hundreds of beneficiaries and what they have received. © Anthony Borden

A residential building shelled in Mykolaiv. The exodus of more than half the population has saved countless lives, as targeting has increasingly hit structures in the centre. © Anthony Borden
The link has been copied

In the tight confines of the Mykolaiv front, short distances – and the determination of an activist priest – are proving the difference for outlying villages between survival and disappearance.

Pryhodko carries on talking. Minutes later, the hollow whoosh of friendly artillery fire causes only a moments’ pause, as he notes, “Outgoing.”

Mykolaiv has become a garrison town, the bulwark protecting Odesa and a base of attack for a surge on Kherson, 60 kilometres southeast. Routinely shelled, in recent weeks the city has endured a significant increase, with more than 40 shells reported on one night alone. Its population of half a million has been reduced to around 200,000.

As Mykolaiv goes, so goes the coastal front, and these villages – between ten and 30 kilometres from the city centre – are in the crossfire, a sparsely populated no-man’s land.

The conflict line roughly straddles the oblast border with Kherson. But it then swerves inwards, into the Mykolaiv region, encompassing much of the Snihurivsky district and creating a north-bearing frontline reaching less than 20 kilometres from the city limits. A handful of villages are nestled in this pocket.

At Kotylareve, Russian positions are around ten kilometres away, both northeast and southeast, and evidence of missile strikes is clear.

A farmworkers’ dormitory damaged, the school hit twice, scattered houses scarred or destroyed, the church’s windows blown out by shock waves. Residents say that of 1,600 residents before the war, around 180 are left. Five people have been killed by artillery and mortar fire. Pryhodko, 42, ran a village grocery shop until it was destroyed by shelling in June. The burned-out door with shattered glass falls off its hinges as he tugs it open to show the charred inside, shelving now skeletal and food tins scattered and blackened.

He points out where family members and customers were standing when the shell hit. Everyone escaped. His house next door was untouched.

In metres and kilometres, residents here measure survival in such small margins.

Tamara Arseniuk, 50, was not so lucky. She is confined to a hospital bed in Mykolaiv, where she has been for two days, since arriving August 11.

Her village of Zorya is southeast from Kotlyareve, putting it five kilometres from Russian positions.

Before the invasion, it had around 300 residents.

“People were working mostly in agriculture. We had a club with concerts and a [musical] ensemble,” she said. “Back then, our village was beautiful.”

As the war progressed, the number of villagers fell to 60. One person was killed in March. By August, there were six left, including Tamara and her partner Victor.

“Russians were bombing every day,” she continued. “I had to send my children to a safer place.”

By chance, the couple noticed that 30 minutes before a shell strike, their mobile phone data connection became unstable. This gave them a little more confidence.  When they had connection problems they would go inside, where, without a cellar, they laid down in the corridor and covered their heads with pillows.

The other factor was the local cleric, Father Andriy Stadovych. Since the start of the war, Stadovych, 43, has delivered humanitarian aid to five villages, coming every week to bring food boxes and medicine, as well as to check on people.

“We have humanitarian support here, and are very grateful for the help of the volunteers,” he said. “This has motivated people, and helped them to stay. Yes, the war is near. But we don’t have any choice. Because our homeland gives us strength.”

Still, the realities are stark.

“The shelling is constant,” said the priest, also a member of the local council. “But over the past month, it has become heavier.”

Recently the calibre of shells had increased from 82mm and 120mm to 152mm and larger. In the past two weeks, he explained, phosphorus ammunition had been used, causing firestorms.

“Now there is almost nothing left,” he said.

Stadovych delivers aid in a large van, but travels the final few kilometres to Zorya in a Soviet-era Moskvich car, 35 years old. It draws less attention from the Russian drones constantly overhead.

This support has made survival on the front possible, giving the villagers both food and encouragement.

“Father Andriy – and Ukrainian soldiers – were helping us,” Tamara said.

Nonetheless, given the increase in shelling, he advised the remaining residents in Zorya to depart.

Tamara and Victor agreed, but did not get the chance. On August 5, though the mobile connection remained steady, the shelling began again.

“A bomb hit our yard, and we immediately ran outside the house,” she said. “After that there were two more bombs, and we caught it.”

Both hit by shrapnel, they were evacuated by Ukrainian soldiers.

“Victor is in intensive care and cannot talk. I am seriously injured. It will take me around six months to heal and maybe even a year to start walking again,” Tamara said.

The priest organised the evacuation of the remaining four, with a neighbour making a last run to the village in the old Moskvich.

Of the five villages Stadovych looks after, the total population has collapsed from 3,000 to around 375.

Novohryhorivka, once a village of 450 people, lies on the northeast conflict line, in the disputed gray zone. Shelled every day, it has essentially disappeared. No one remains, and according to the priest and the Ukraine military, all of its properties have been levelled.

Zorya is now a ghost village, too.

Aside from Kotylareve, that leaves Stadovych with two other villages to tend.

Little Schevkenko is a few kilometres closer to Mykolaiv. Out of a population of 550, around 170 remain.

As the priest trundles down the uneven road in his van, a crowd of around 30 awaits. The village centre is no more than a muddy crossroads, with one forlorn school bus stop. Residents say a shell landed in the open area opposite it yesterday. Today, three cattle are grazing there.

The priest and several helpers open the large van doors. There is plenty, and people take one or more boxes as they need.

“We are holding up,” says Piotr, 66, as he waits in the line. His wife and grandson have left, but his son is still with him.

“I’m not leaving. Sometimes there is a lot of shelling. My house is almost undamaged, just some shrapnel. I’m lucky as my house is not in the first line of the village, so it’s not dangerous. You get used to it,” he said, adding that four houses near his have been destroyed. Oksana, 48, lost her son Sasha in a missile hit. Recently, her house was damaged in another explosion, but she and her husband were uninjured as they were outside.

Still, they will stay in the village. Asked what she thinks will happen, she wells up.

“I can’t imagine,” she said, and turns away.

Russian troops passed through these villages in February, gathering a force of 1,000 in a field just a few kilometres from the outskirts of Mykolaiv.

According to Andre, an officer with the Ukrainian 59th Brigade who asked not to be identified, Ukrainians launched a sustained attack on the first days of March from side positions with howitzers, taking the invading force by surprise, killing many and capturing a dozen. They said they expected to be welcomed in Mykolaiv and were then intending to head for Odesa.

The field remains littered with the carcasses of Russian armoured vehicles and shells.

But Andre stressed that the conflict was now a long-range one, and that the exact location of the frontline at a given moment is not a complete indicator of the military situation.

Ukraine is targeting Russian military stores, critical bridges in occupied territory and other strategic targets. Ukraine also claims that it has liberated 50 villages in the Kherson district.

Even as a digger extended a complex network of trenches along the highway to Kherson, Andre stressed that the advance on Kherson will happen at the right time.

For now, the Mykolaiv frontline remains, and the villagers continue to suffer. “We cannot move them away by force, and even if we could, they say, ‘Where would we go’?” said Andre. “Those who are left there will survive because they got used to the shooting and the shelling. They also boost the soldiers’ morale, to fight for them and do their job.”

Tamara, from her hospital bed, dreams of returning, but cannot imagine how.

“Now our house is destroyed. It’s a big hole. And who will rebuild our houses?”, she said.  Becoming distressed, she continued, “I am not that young, and after this injury I will not be able to do it by myself.”

Pryhodko, the Kotlyareve shopkeeper, remains positive, with plans to repair his shop and re-open when he can. He credits the priest Stadovych – and electricians and other infrastructure workers – for enabling those who wish to remain.

Pryhodko is concerned that winter may cause more to leave, gas supply being a problem. But not the shelling.

“We’ve had worse,” he said. Nodding to the explosions a few kilometres away, he says, “The sounds we hear now are like silence for us. It’s not even necessary to hide. Well, almost.”

Translation and additional reporting by Mykhaylo Shtekel. Thanks to Dmytro Davydenko of the volunteer assistance group DOF for help with this article.