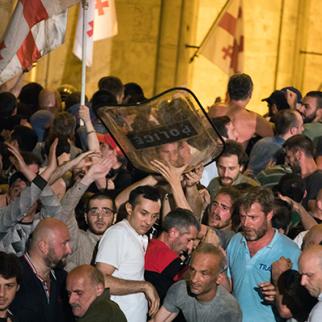 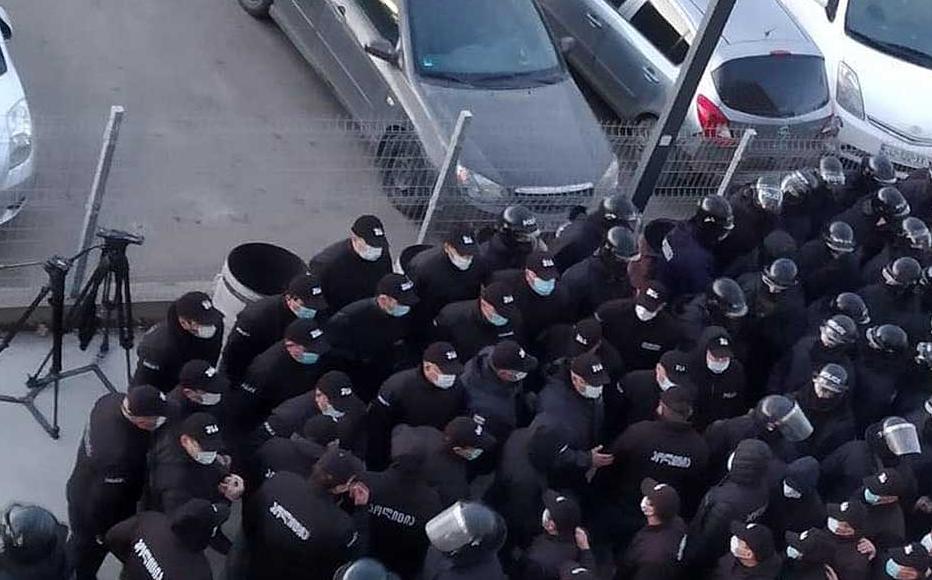 Riot police as seen from the inside of the United National Movement's headquarters before they raided the building to take Nika Melia into custody. © Tamta Gogolakhe
The link has been copied

Georgia’s political crisis has deepened with the arrest of the chairman of the United National Movement, the country’s largest opposition party.

Nika Melia’s detention - related to his role in Georgia’s anti-Russian protests of June 2019 - was met with widespread condemnation and calls for further protest.

He was detained on February 23 at 7.30am amid chaotic scenes at United National Movement headquarters, where he had been waiting with other party members, activists and journalists.

Several hundred policemen stormed the building, backed up by special forces, and his supporters sang the Georgian national anthem as he was taken into custody.

Melia had been prosecuted for having “led, organised, and participated” in inciting violence on the night of June 20, 2019, when activists were dispersed with tear gas and rubber bullets by security forces who claimed that they were attempting to break in the Parliament. He claims the charges against him were politicaly motivated.

The protests were sparked by Russian lawmaker Sergei Gavrilov’s visit to the Georgian parliament.

Bailed on condition that he wore a security tag, Melia publicly threw this away as “a symbol of injustice” at an anti-government rally the day after the country’s October 2020 parliamentary elections, which the opposition declared to be rigged. They have refused to enter parliament or recognise the legitimacy of the current government ever since.

On February 17, parliament voted to remove Melia’s parliamentary immunity, allowing the Tbilisi city court to sentence him to pre-trial detention.

The move proved controversial even within Georgian Dream. The day after the court’s decision, the party’s leader Giorgi Gakharia resigned from his post as prime minister.

“It is my firm position that such a decision - even if taken under legal, judicial framework - is unacceptable if this puts our citizens’ life and health at risk or creates a possibility for political escalation in our country,” he said, adding, “Unfortunately, I could not reach an agreement on this with my team and made a decision to resign.”

Concern and criticism were also voiced at home and abroad.

“In this particular case, the primary responsibility for defusing the situation lies with the ruling political party and the institutions that are directly involved in the current events,” a coalition of 17 domestic NGOs said in a joint letter.

Georgia’s Public Defendant’s Office said in a statement that “the arrest of the leader of the opposition political party without proper justification of the procedural need will be a big blow to the Georgian justice system”.

“I am alarmed by the news coming from Georgia, a country that used to set examples for others and now slides back to its turbulent past as in the 1990s,” tweeted European parliamentarian Anna Fotyga.

Former Estonian president Toomas Hendrik Ilves tweeted that he was “seriously upset, preoccupied, in part even disgusted by what is going on in a country I have spent 23 years promoting, defending, boosting, helping. You deserve so much better than this, dear Sakartvelo [Georgia]”.

Lawyer Giorgi Mshvenieradze, an advisor at the Georgian Democracy Initiative, said that the court had interpreted the law to suit the government’s interests.

“Melia’s case clearly shows that the organs of the justice system – the prosecutor’s office and the courts - base their decisions on political motives and not on laws,” he said. “Laws are interpreted according to the government’s will. For example, in practice, I don’t remember a bail charge being made ‘stricter’ by a higher bail charge, and this happened for the first-time during Melia’s case… the court uses legal techniques to interpret norms in a new way that best suit the government’s political decision.”

Thornike Gordadze, a lecturer at the Paris Institute of Political Studies, said that Melia’s prosecution - and Georgian Dream’s broader politics - were driven by the interests of its oligarch founder Bidzina Ivanishvili.

“The Georgian Dream government is a typical post-Soviet agglomeration of personalities with no clear ideology, values or geopolitical orientation,” he said. “The party is entirely dominated by an oligarch, whose wealth equals 40 per cent of Georgia's GDP. The personal and financial security of this oligarch is the main objective of this party, as members are loyal to their informal leader and not to the state institutions or the constitution of Georgia.”

He noted that the heads or shareholders of the main opposition media outlets were also currently under investigation or had been convicted by a judicial system “which is also totally submitted to the oligarch and his party”.

“The current leadership of the party is also the one who has the most extremist views on issues such as national identity, the rights of the minorities, etc,” Gordadze continued. “They are ready to use populism and violence to pressure and to destroy the opposition and save the oligarch’s regime. At the same time, this radicalism shows the weakness of Georgian Dream and its inability to govern.”

He said that Georgia faced increased isolation if it continue down this path.

“The EU and the US, several individual European countries already called [for Tbilisi] to stop politically motivated retribution,” Gordadzesaid. “If Tbilisi doesn't follow Western advice, the country could definitely slide under Moscow's influence. Indeed, Russian influence has been growing in Georgia since 2012, with Georgian Dream in power.”

“The 2020 elections and the ongoing political crisis showed that the government is willing to use every means to retain its grip on power,” she said. “The only way out from this deadlock is to continue dialogue and come to a decision based on consensus – be it the creation of a just election system or holding new and just elections with this new system. Every decision made without consensus and dialogue furthers us away from NATO and EU integration. Together with this, it is important that civic engagement broadens in these processes, and it is not only encompassed by the existing parties.”

Gega Mgaloblishvili, a lecturer at the National Defence College, said that snap elections were the only way to resolve the political stalemate.

“Following Georgia’s 2020 contested elections, the government has been facing a legitimacy crisis,” he said. “This has further deepened with the chairman of the party – Ivanishvili – formally leaving politics – and the number one in their party list – Gakharia – resigning. The only way out of this is snap elections. That’s the only way forward. All statements made by our international partners highlight discredited institutions and low to no trust in the judiciary as sources of Georgia’s democratic backsliding.

Giving Voice, Driving Change - from the Borderland to the Steppes
Georgia
Protests, Opposition
Connect with us