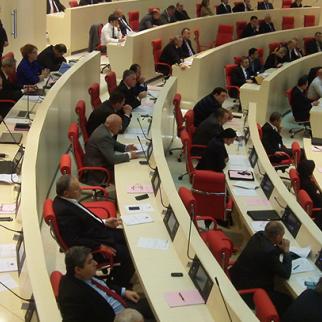 Embarrassment for government after police struggle to protect anti-homophobia march.

“The homophobia and trans-phobia that’s rooted in our society really makes it hard for you to identify as gay or lesbian or whatever in public,” says Natia Givenishvili of the Women’s Initiative Supporting Group in Georgia.

“There’s a constant battle of the majority trying to bully the minorities into silence. It goes not only for LGBT [lesbian,gay, bisexual, and transgender] people but for all sorts of other minorities like ethnic minorities, religious minorities, etc.”

What has changed in Georgia is the law – on May 2, the country’s parliament passed legislation outlawing all kinds of discrimination.

The Georgian Orthodox Church fought the law every step of the way, arguing that including protections against discrimination for gender identity and sexuality would undermine the nation’s morals and destroy the family. Passing the law is a precondition for Georgia being granted relaxed visa procedures with European Union states.

Despite the improved legislative environment, there LGBTY community has no plans to repeat a rally against homophobia held in May 2013, in which participants were stunned to face a vicious counter-demonstration.

“I still think May 17 did have twofold results,” says Anna Rekhviashvili of the Identoba group, who was there. “On the one hand, it brought LGBT issues onto the public agenda and it did demonstrate the absurdity of the level of homophobia that this society is suffering. However, on the other hand there were real people who were injured. And this was also the day that really demonstrated the political power that the church has."

Heather Yundt produced this edition of Behind the Headlines, a radio programme made by IWPR Georgia.

The programme is part of IWPR’s Building Bridges/Building Capacity in the South Caucasus programme, funded by the Norwegian foreign ministry. The contents of the programme do not reflect the views of the funder.

Georgia
Human rights
Connect with us