Calls for convicted killer to be handed over to serve sentence.

Calls for convicted killer to be handed over to serve sentence. 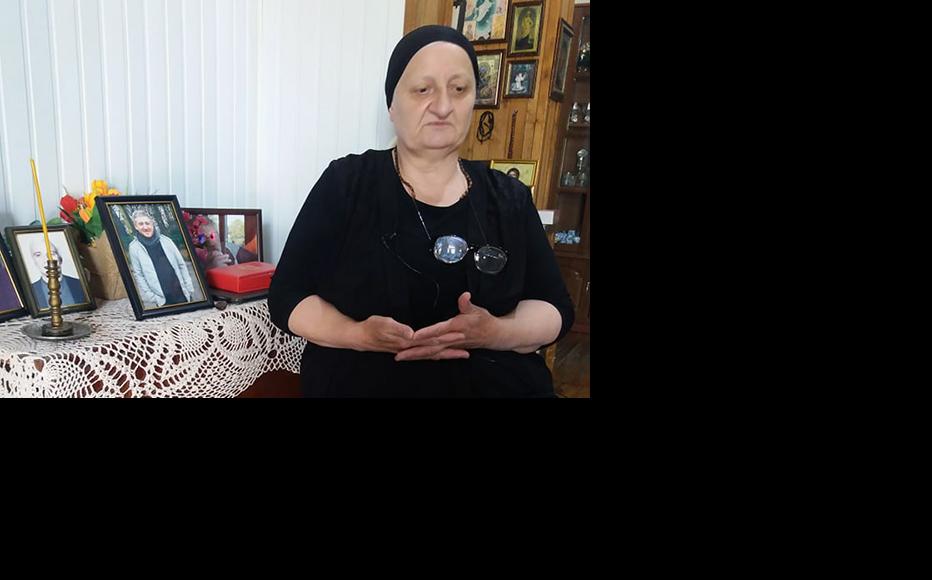 Giga Otkhozoria's mother, Julieta Chanturia, sits in her home with photos of her son. (Photo: Tamuna Shonia)
The link has been copied

On the fourth anniversary of his murder, the family of an internally displaced person (IDP) killed by an Abkhazian border guard have appealed for justice to finally be done.

Giga Otkhozoria, a 30-year-old IDP from Abkhazia, was killed on May 19, 2016 following a verbal dispute with guards at the checkpoint of Khurcha-Nabakevi near the demarcation line.

Otkhozoria was on his way from his home in Zugdidi into Abkhazia for his aunt’s funeral when guards reportedly asked him for a bribe to let him pass through the checkpoint.

His mother Julieta Chanturia said that he had told the men, “You are standing on our land, how dare you speak to us like that.”

When Otkhozoria tried to leave the area, an armed Abkhazian guard, Rashid Kanji-Oghli, fired two bullets at him and then chased him across the demarcation line before shooting him in the head at the checkpoint inside Georgian-controlled territory.

Arvelod Nachkebia, a 93-year-old who lives in the village of Khurcha, recalled the day of the murder.

“I was there when Giga was killed; there were lots of people going back and forth in the area that day,” he said. “My house is 50 metres from the border where the murder took place. We all were scared and confused, after the shooting I saw how the killer ran away.”

The trial that followed lasted for months, with more than 50 witnesses, some of them giving evidence by video link, testifying during the case in the Zugdidi District Court. All eyewitness accounts confirmed that Kanji-Oghli had shot Otkhozoria.

On December 26, 2016, the court found Kanji-Oghli guilty in absentia of premeditated murder and sentenced him to 12 years in prison, a sentence later increased to 14 years after the prosecution appealed.

Abkhazia, which declared independence from Georgia in the early 1990s but remains unrecognised by much of the international community, has refused to carry out the sentence. Kanji-Oghli is still at large and wanted by Interpol.

In 2018 after the high profile murder of Archil Tatunashvili, who was killed in unclear circumstances by occupying forces in Tskhinvali, tensions between the Georgian government and the Abkhaz and South Ossetian de-facto government’s greatly increased.

In response to what they perceived as the failure of the Abkhaz and South Ossetian sides to prosecute the guilty parties to these crimes, the Georgian government created the Otkhozoria-Tatunashvili list, a series of sanctions against individuals who have violated human rights in the occupied territories since 1991 and who need to be brought to justice.

However, Chanturia said that she was disappointed with what she decribed as a lack of action by the Georgian government over her son's murder.

“The investigation was not carried out properly; the fact that there were three other people with the killer at that moment was not considered during the trials, even though it was not difficult to confirm the information,” she said. “I even wrote a letter to the prosecutor and said that if they were going to conduct an investigation so superficially, they might as well finish it in one day.

“The only thing I can say is that I am very grateful to the Georgian Young Lawyers’ Association,” she continued. “As they told me, they sent questions to the Abkhazian side asking about the progress of the investigation. They asked the Georgian side to send them the evidence, which they failed to provide properly. I am still demanding justice and punishment for my son's killer, which, unfortunately, I have not been able to achieve.”

Meetings of the Incident Prevention and Response Mechanism have been held in Gali district for years, with Georgian, Abkhazian and Russian officials alongside the delegation of the European Union, the OSCE and the UN. The sessions have now been suspended due to the coronavirus pandemic, but for the past four years the Georgian side repeatedly raised the issue of handing over Otkhozoria's killer, in vain.

Chanturia said she was sceptical of the ongoing format of talks.

“I always keep an eye on these meetings in order to learn any news,” she said. “But for me they have been at a standstill for years now.”

However, Ketevan Tsikhelashvili, state minister for reconciliation and civic equality, said that the authorities would continue to press for justice to be done.

“Everyone knows that there is indisputable evidence about the identity of the killer, which is why it is so tragic indeed that this man has not been punished in the occupied territories for all these years,” she said. “For us, it is a matter of principle, and this matter will never be removed from our agenda until justice is served.”

Tsikhelashvili added, “When a civilian, a displaced person from Abkhazia, is chased and brutally murdered, denying it is beyond any legal and humanitarian bounds.”

Nodar Korkelia, 61, a relative of Giga and also an IDP from Abkhazia, said that three years ago, footage emerged of Kanji-Oghli dancing at a wedding party in Gali, although since then, he had been more careful and avoided publicity.

He said that he too was disappointed in the approach of the Georgian authorities.

“This happens every time; our government is not consistent and principled on any issue or matter, especially regarding the crimes and human rights violations committed in the occupied territories. This case should not be removed from the agenda,” he said.

“People live in fear, they do not understand whether it was the Russian factor that played a role or it is just usual disarray,” Korkelia continued. “This is a gross violation of human rights, when a young man is brutally killed for nothing in front of everyone at an administrative border, which is meant to be the most secure territory, where people and peace are meant to be protected, it was the greatest insult and humiliation for us, trampling over the interests of the country.”

Giving Voice, Driving Change - from the Borderland to the Steppes
Georgia, Abkhazia
Extrajudicial killing, Internally displaced
Connect with us