"It's in the long-term strategic interests of Russia to have Georgia as a friend."

"It's in the long-term strategic interests of Russia to have Georgia as a friend." 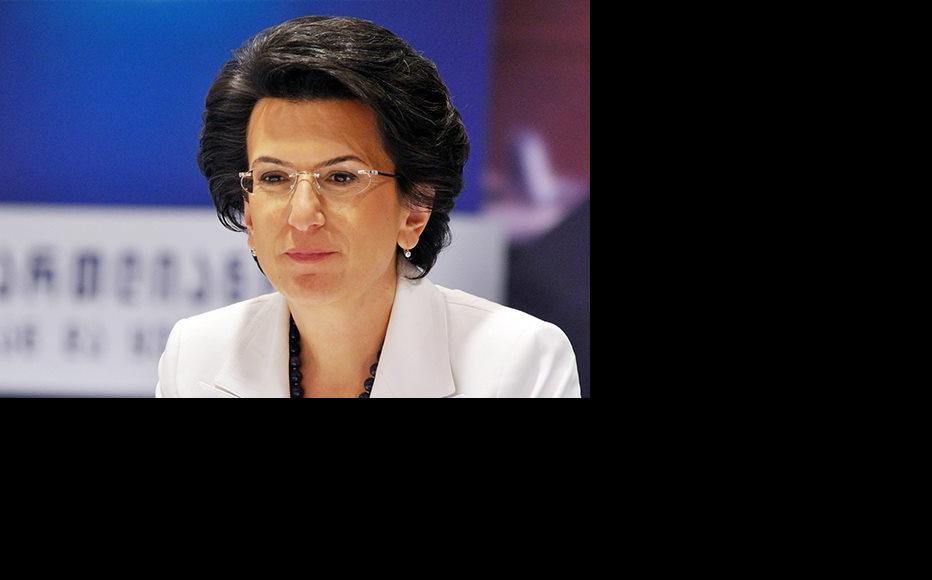 Nino Burjanadze, running as a candidate with the Democratic Movement - United Georgia party. (Photo courtesy of N. Burjanadze)
The link has been copied

Nino Burjanadze, leader of the Democratic Movement – United Georgia party, was one of the politicians who spearheaded Georgia’s 2003 Rose Revolution and remains among the most recognisable and influential political figures in the country’s recent history.

Twice acting president of Georgia, Burjanadze has also met with controversy, having met repeatedly with President Vladimir Putin over the years – most recently in 2019 – and continued to advocate for good relations with Russia.

Ahead of the October 31 parliamentary elections, IWPR asked Burjanadze whether she might reconcile with her political rivals – and why she still supported direct dialogue with Russia.

IWPR: If the opposition cannot win convincingly, would you consider the idea of forming a coalition with the ruling party and Bidzina Ivanishvili [The richest man in Georgia, who brought the Georgian Dream Party to power in 2012 to oust Mikhail Saakashvili’s United National Movement].

Burjanadze: When Ivanishvili made his first steps in 2012 I supported him, despite the fact that I am more than sure that an oligarch should not be part of the political life of the country, especially in a country like Georgia where one person has more personal wealth than the state itself. But at the time I supported him because I believed that he had the possibility of ousting Saakashvili’s government without bloodshed. He promised that he would bring prosperity to the country and create genuinely democratic institutions and it was not difficult to believe because he himself had everything, so why shouldn’t he do everything possible to stay a hero in the history of the country? But unfortunately, he didn't fulfill any of his promises. Instead of democracy and a European style country, he created an authoritarian system of rule and that is why I no longer believe Ivanishvili and in his [Georgian Dream Party]. When you’re considering being a part of a coalition, there needs to be a bare minimum of trust and I know quite well that Ivanishvili doesn't keep his promises if it's not comfortable for him. Therefore, I’m not going to have any kind of coalition with the government because these are people who don't understand what it means to have a genuinely European and democratic country, these are the people who didn't do anything positive in the last eight years.

What about the [pro-Russian, right-wing and conservative] Alliance of Patriots grouping? Would you consider any sort of working relationship in a parliamentary environment with them?

You know this is an absolutely different game and we have nothing to do with them. I don't think that we have any kind of point of agreement with the Patriots. So I'm not going to coordinate or cooperate with them, any kind of coalition with them is absolutely out of question.

In the past, you’ve attached a great deal of importance to the fact that you were given access to the Russian President, but nowadays we haven’t really heard anything on that front from you. So are you no longer able to meet with Putin or are you not willing to meet him anymore?

Concerning Russia and the Russian president, I think we have to continue our relations and cooperation with the West and with all other countries and partners - but Georgia needs direct dialogue with Russia because this is just basic diplomacy. When you have a problem, you will find solutions only in talks and negotiations.  Meetings with President Putin were very important, very interesting for me, I'm absolutely sure that in case of interest from the Georgian government it was possible to use these meetings in positive ways but unfortunately no one dared to do that as they were afraid to be blamed as being pro-Russian. When I had the meetings, I was trying to really discuss the problematic issues, I was trying to find a way to just move these questions forward and saw the interest from the Russian president to create normal relations with Georgia. Yes, we have absolutely different visions on some issues but I'm sure that through lots of effort it will be possible to find a golden mean between Russia and Georgia.

Exactly what kind of benefits would a direct dialogue with Russia bring? What kind of leverage would you or the Georgian side in general would have in talks with Russia?

Why would that be in Russia's interest?

From what I saw, the president of Russia understands quite well that a united and friendly Georgia is much more important for him than a fractured and unfriendly country and in the long-term strategic interests of Russia, having Georgia as a friend is very important for stability in the Caucasus.

He seems to have quite a strange way of showing that, doing everything to achieve the exact opposite. Once again, have you got any leverage that would conceivably make Russia more amenable to this vision of a united, whole, prosperous Georgia?

It is not a secret that for Russia Georgian membership in NATO is not acceptable, this is the question of their security and for me it's most important not to be a member of any kind of organisation, for me most important is to create the kind of reality that will enable us to reunite Georgia.

So you would advocate for some sort of international neutrality?

For neutrality you need international guarantors. Why not? If it will be possible, neutrality is an interesting option because we need to remove Russian military bases from Georgian territory but of course I understand quite well that if Russia sees some kind of threat or even a question that one day its military bases in Georgia will be dislodged by NATO ones, then they will never leave.  So my position is that we don't want Russian military bases on our soil - but at the same time we must promise that we will not bring in any other countries or any other military presence on Georgian territory.

Giving Voice, Driving Change - from the Borderland to the Steppes
Georgia
Elections
Connect with us