“We can bring in ten billion dollars of investment in four years.”

“We can bring in ten billion dollars of investment in four years.” 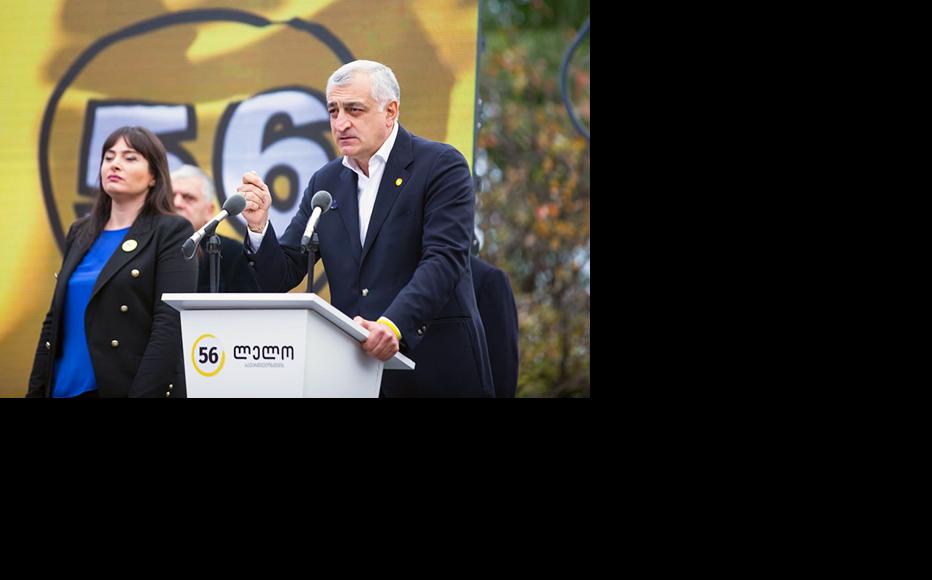 Mamuka Khazaradze, the leader and prime ministerial candidate of the newly-established Lelo movement, has vowed to implement a so-called Marshall Plan for Georgia if elected as premier.

At the heart of this proposal is the development of the Anaklia deep sea port, close to the border with Abkhazia - and strongly opposed by Russia.

Khazaradze, the founder of TBC Bank, is currently being investigated for involvement in a 17 million US dollar money laundering case, an enquiry he has insisted is a politically motivated move by Georgian Dream founder Bidzina Ivanishvili to block the Anaklia development.

Khazaradze recently tested positive for coronavirus and spoke to IWPR from hospital about his party’s promise to turn Georgia’s dwindling fortunes around in just four years.

IWPR: What are your predictions ahead of the elections?

Khazaradze: We are among the three major parties and have already more than 200,000 registered members and supporters. Nobody in the last 30 years did this kind of job. We opened 74 offices, we are in constant communication with 250,000 people who signed up to be our supporters. We believe the opposition will manage to win, we’ll create the coalition together with other opposition parties and start implementing the Marshall Plan for Georgia.

Speaking of coalition, is there any party you would refuse to ally with?

We would not make any deals with a non-Western oriented party, including the ruling party, that’s for sure. Other than that, we are not going to support the UNM candidate which is [former leader Mikheil] Saakashvili’s party.

As for this Marshall plan, it’s safe to say that it’s by far the most ambitious programme we have heard so far. You promise 200,000 jobs and 600,000 people receiving more than 3,000 GEL (925 US dollars) monthly income, nearly three times the current average wage. Where will the funds come from to make this happen?

Among 3.7 million people [in Georgia], only 1.5 per cent receive 3,000 gel per month. This is the so-called middle class. If you don’t strengthen the middle class there’s no future and no economic development. Our main goal is to create this middle class. How are we going to do it? There are only two ways to increase the economy. One is consumption GDP per capita which is very low in our country and another one is to have a very strong international stock exchange. The beauty of the Marshall plan is that we have prioritised local resources. The Marshall plan does not mean that we are asking for grants or loans - our idea is to establish an international stock exchange in Georgia to privatise all 250 state owned companies on this stock exchange, partially our national funds - also if you take all the banking sector deposits, which is 28 million GEL (8.6 million US dollars) - so ten per cent of this money will go to the stock exchange. We’ll put a condition for companies with a state license - which means satellite companies, energy companies, mining companies, that pay royalties for their license - that they should bring 20 per cent to the market, just to enable its capitalisation. We know the state cannot create jobs; only medium, small and big industries can create it. At the same time, you cannot run a stock exchange without a very strong judicial system and we’ll bring international arbitration, we’ll bring all commercial disputes, local and international, to this arbitrage. We can become not only the financial and juridical centre of Georgia but of the Caucasus.

What is the attraction in turning Georgia into the stock exchange hub for the rest of the world?

Actually, we have to create the system… for Azeris, Central Asian companies, because these companies cannot routinely raise five, ten, 25 million dollars for the stock exchange because it’s very difficult. It’s too expensive to go to London for the stock exchange; we need a trustworthy regional player and Georgia can be just that.

While the plan does indeed sound grand, what are the challenges when it comes to implementing it?

We have to be in a ruling position. We have the political will, we have people inside and outside Georgia, highly competent professionals, who we will bring in notwithstanding party allegiances. For me professionalism is the decider; we are ready to discuss this Marshall Plan with any of the opposition parties. This is a very global plan, it envisages extensive regional development, including opening the Anaklia deep sea port, starting the Anaklia smart city development, while in Kutaisi [in Western Georgia] we will transform the international airport into a logistical hub.

And you also plan to turn the southern city of Batumi into a maritime industry centre, complete with a fully-functioning Georgian navy.

Absolutely. We can provide not only the services, we can also provide the management. We have 16,000 sailors, captains, boatswains and we should develop maritime arbitrage and leasing. The Georgian flag should be an attractive maritime flag.

What about the geopolitical situation? We are in a turbulent region and Anaklia itself is not only close to the occupied region of Abkhazia, but has a natural rival in one of Russia's own port cities. So how are all these factors going to affect your plan’s implementation?

I can remind you of the Baku-Ceyhan pipeline project [which runs from Azerbaijan via Georgia to Turkey] - 25 years ago the situation was much more dramatic. I think this is a sovereign Georgian decision about what kind of port [we want] and where we should build it because the geopolitical situation will always stay more or less the same. We must make Georgia attractive to our neighbours. As soon as we start this reform and provide maximum guarantees for investors and international guarantee, things will start moving much faster…. I can tell you that the banking sector in Georgia is one of the top developed banking sectors in the world; two banks are trading in the London stock exchange. We have the base, we have people who know how to work under the stock exchange regulation. We are planning to bring around ten billion dollars of investment in four years.

On to foreign policy - what is Lelo’s take on the issue of the occupied territories? How are you going to go about the reintegration process?

We believe that dialogue should continue and that our diplomacy should manage to bring the major Western countries and their leaders around the table to enlarge it, so to say. We strongly believe that the Anaklia port and city are the best way to start dialogue between people to create jobs there.

How do you aim to spark an interest in Western leaders, because so far they've remained largely sceptical or reluctant to get deeply involved?

The biggest problem of Georgian Dream is that they are looking not to the west but to the north… they fought for two years just to stop one of the biggest and most important projects for Georgia, the Anaklia project. So this is the vector we should change and then things will start moving apace.

You criticised the ruling party on its stance towards the Kremlin; what will your own party's approach be?

Twenty per cent of our territory is occupied by Russia. We will continue dialogue, but with the involvement of the major countries, who will act as mediators.

So no direct, tete-a-tete dialogue - for example, meeting with the Russian President - would be on the table?

No. Imagine instead, 20 per cent of their country occupied and [Russia] having refugees - can you imagine them wanting to talk without solving it? You know it's not about the size of the country, it's about freedom and integrity, and this is a very clear position from me personally.

Georgia
Elections
Connect with us