Analysts say the Kremlin is trying to highlight the West’s apparent failure to help its allies. 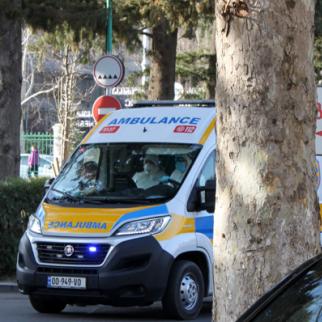 An ambulance arrives with a patient to the Infectious Diseases and AIDS Centre. (Photo: Nika Vetsko/IWPR)

Analysts say the Kremlin is trying to highlight the West’s apparent failure to help its allies.

In late March, amid much fanfare, Moscow sent coronavirus-struck Italy a massive shipment of aid emblazoned with the slogan From Russia With Love.

According to Reuters, over a dozen military transport flights brought a 100-member team consisting of top-level nuclear, biological and chemical experts along with personal protective equipment (PPE), ventilators and mobile disinfection units.

Although this received widespread coverage in both the European and Russian media, it subsequently emerged that the vast majority of the equipment turned out to be completely useless.

In Georgia, this apparent publicity stunt seemed particularly relevant. Analysts warn that this approach - Russia attempting to boost its own reputation while highlighting the apparent failure of the EU to help one of its member states – is often leveraged in Georgia, too,

“Since the EU imposed sanctions against Russia in response to the annexation of Crimea, the Kremlin has been working methodically to undermine individual European governments and Western unity,” said Giorgi Badridze, Georgia's former ambassador to the UK. “If Putin's ‘Italian operation’ had achieved the desired effect, more Italians would have backed politicians who demanded the lifting of sanctions on Russia. When Italy formally demands the lifting of sanctions, it will place Russia in an unbeatable position. Even if sanctions remain in place, it will still deepen the existing rift between Italy and its European partners.

“Many Italians already believe that the EU has so far shown insufficient solidarity,” he continued. “The proliferation of such attitudes will make an eventual disintegration of the EU even more possible. And this is exactly what the Kremlin considers to be one of the main priorities of its foreign policy.”

“The EU was really late in its initial response and by the time they offered Italy aid, even though it was far more than Russia and China, the news was ignored by the Russian propaganda machine which continued to spread disinformation,” agreed Jacob Lachashvili, an analyst for FACTCHECK.ge in Georgia. “In the context of fighting the coronavirus, Russia's goal was to turn the population against the EU and portray the authoritarian model of governance as more effective than the democratic one.”

Disinformation is also part of this strategy. Lachashvili said that, among other things, pro-Russian portals had spread the lie that the Polish government had not led the Russian aid pass through Poland to Italy, whereas according to Polish officials Russia made no such request.

Georgia has long been targeted in such campaigns, most notably with conspiracy theories around the Lugar Laboratory, a US financed research centre in Tbilisi.

Over the years, Russian authorities and media have worked to discredit the lab and US-Georgia relations more widely, with previous disinformation ranging from describing it as a military biological base focused on attacking Russia, to allegations that it is conducting secret human experiments.

Lachashvili continued, “Sources of Russian propaganda spread the same conspiracy theories [in Georgia] as in Europe, for example: coronavirus is a farce; the coronavirus may have been created in a US-funded Lugar Lab; the spread of coronavirus and high mortality are related to 5G, etc.”

Meanwhile, the Russian narrative that the West had not assisted Georgia during this time was also untrue. The US has allocated an additional 64 million US dollars for Georgia during the pandemic, and EU ambassador to Georgia Carl Hartzel also introduced an aid package that will be granted in several stages.

“The EU Special Solidarity Package will assist Georgia in tackling and overcoming the Coronavirus challenges,” she said. “For immediate response, Georgia will have access to the 30 million euro (34.7 million dollars) regional emergency pool of medical equipment and devices allocated to the Eastern Partnership countries. In addition, we plan to launch an additional 20 million euro (23.1 million dollars) local targeted grant program in Georgia.”

According to Kakha Gogolashvili, director of the European Studies Centre at the Rondeli Foundation, a total of 180 million euro (208 million US dollars) will be allocated for Georgia this year from various EU sources, assistance that will increase to one billion euro (1.1 million dollars) over the next three years.

Analyst Giorgi Bilanishvili argued that the Kremlin was trying to partner with Georgian media susceptible to their influence, as local outlets brought more effective results than Russian sources.

“Unfortunately, especially recently, such organisations have emerged in Georgia,” he said. “They contribute to the spread of Russian propaganda in Georgia and influence public attitude. The language barrier also plays an important role. For example, in Marneuli, where people only watch Russian-language media and the Georgian villages near the occupation line, where internet is mostly unavailable, Russian news channels are being aired without any problems.

“I think the state must take these issues into account in the fight against Russian propaganda.”

The Infodemic
Georgia
Disinformation, Coronavirus
Connect with us