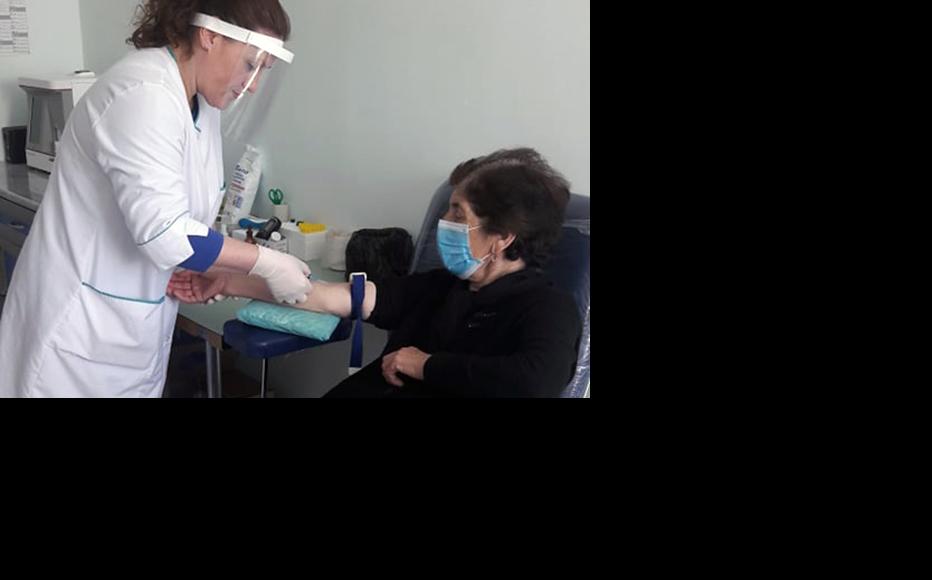 Nino Tvauri at the clinic where she works in Nikozi. (Photo: IWPR)
The link has been copied

Nino Tvauri, 38, is a laboratory assistant in the village of Khiti, located near the line of occupation in Shida Kartli. When a state of emergency was declared in Georiga due to the Covid-19 crisis, she began volunteering in the outpatient clinic in neighbouring Nikozi, walking three kilometres from her home every day after work and then making home visits.

“It didn't matter whether it was raining or cold, you probably remember how bad the weather was during that time of self-isolation, I still visited my patients at home and provided them with the help they needed,” Tvauri said. “They cannot come to the clinic because of their age or health condition. I help them to change their clothes, measure their blood pressure and take temperatures. Sometimes they call and ask for some medications, and I bring them from the clinic, mostly blood pressure medicines and sedatives.”

Fears in the community rose after a local nurse working in Gori military hospital tested positive for Covid-19, she recalled.

“When the first case of coronavirus was confirmed in our region, my emotions changed a lot. I became anxious, but I did not let my mood affect my patients,” Tvauri continued. “I explained to them that if they followed all recommendations there would be nothing to worry about. When you work in the medical sector, you do not have the right to disappoint the patients and take away the hope they see in you.”

Women in the villages along the conflict line in Georgia have described their efforts to care for the most vulnerable members of their already-stressed communities.

There are a total of 56 villages in Shida Kartli with the special status of settlements along the occupation line. Recently, 11 were granted the status of highland settlements, which means that they can enjoy certain additional benefits.

Before the pandemic, the main problem in the conflict zone was the occupation and the accompanying sense of insecurity, with barbed wire fences and soldiers spread throughout the area. This was exacerbated by concerns surrounding coronavirus. For instance, it is hard for locals to follow World Health Organisation guidelines on hygiene amid ongoing water supply problems in some villages along the occupation line.

Mental health experts believe that women are particularly affected by this situation.

“The livelihood of women in the villages of the conflict zone has become more complicated,” explained psychologist Ana Khutiashvili. “They are scared that occupiers might come and seize their property, either their land or their house, and, in addition to this, they fear winter and how to survive it. After a pandemic, I think it is necessary to provide psychological assistance to all women living in such places.”

Some women responded to the crisis by throwing themselves into volunteering. Luda Salia is a 62-year old IDP who fled Abkhazia during the war in the 1990s and now lives in Khurvaleti near the occupation line. During the quarantine she committed herself to taking care of the 13 residents of a nursing home near her house, using experience she gained working in the Agudzera Military Hospital nearly 30 years ago.

"I could not abandon the people who had already been abandoned by their family members,” she exaplined. “Along with a hot meal and basic needs I tried to make their days more cheerful.”

“One of my co-workers took the role of a stylist for a while, we dyed their hair and did manicure and pedicure. We even organised poetry evenings, where they read poems they remembered from a young age. Some of them played piano, some sang songs. That's how we used to colour these monotonous days of self-isolation for these people,” Salia said.

Lia Mikeladze, 52, from the community of Mereti, is helping the local government collect data about socially vulnerable people in neighbouring villages. She said that 54 of the 125 households in Koshka had elderly members, some of them with chronic diseases, while in Gugutiantkari a third of the 96 families were especially vulnerable.

“As a result of our communication and data provided to local municipalities, families were supplied with groceries. Also, families with elderly members were provided with necessary medications,” Mikeladze said.

Lia Chlachidze, who lives in the village of Ergneti, took responsibility for two neighbours – 81-year-old Leila Chlaidze and Mania Terashvili, 85 - both of whom have no family and live alone.

“When I cooked meals for my family, I always shared it with them. I brought them medications and they could call me if they needed something,” the 68-year-old said.

A member of the Gori city council, Chlachidze had a special permit that allowed her to drive her car even during the lockdown.This meant she was able to buy essential supplies for her neighbours in Ergneti, which has no grocery shop.

“I used to go from house to house asking my neighbours what they needed,” she said. “I remember one day I bought groceries for 15 families. I even paid young people from my own salary to help distribute food to elders. Within this initiative we distributed Easter cakes and eggs to people in the village.”

Rusudan Meskhi runs a small grocery shop near her house in the village of Tsitelubani, also near the occupation line. The 57 year-old mother of three managed to stockpile some supplies in her shop, part of which she decided to distribute free of charge.

“There are 240 families living in Tsitelubani, we have been living in difficult conditions for years,” she explained. “Every day we see armed Russian soldiers face to face. The people were stressed even before the pandemic, but this hardship made our lives worse than ever.

“As for me, I wanted to make my contribution during this difficult time. Every morning I go from house to house with my son’s wife and distribute bread and sugar, because people cannot buy food elsewhere. Sometimes, I see that people are counting their last coins and I do not charge them for bread, I leave it for free.”

Coronavirus Pandemic, Giving Voice, Driving Change - from the Borderland to the Steppes
Georgia
Coronavirus, Civil society, Women
Connect with us