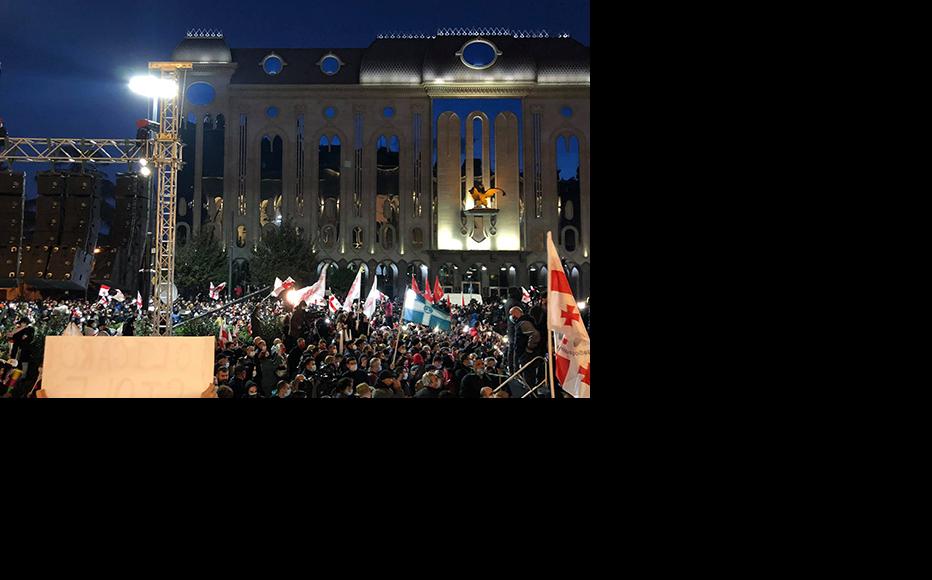 Protestors gather in front of parliament to demand new elections and the resignation of the chair of the Central Election Commission, Tamar Zhvania. (Photo: Anastasia Mgaloblishvili)
The link has been copied

Protests are continuing in the Georgian capital Tbilisi over the disputed results of October 31 parliamentary elections.

According to final results published by the Central Election Commission (CEC), the ruling Georgian Dream party won 48.15 per cent of the vote in Georgia’s first predominantly proportional elections. This also made them the first party in the country’s history to be re-elected for a third term.

Election monitors from the OSCE said that “overall, fundamental freedoms were respected" although “pervasive allegations of pressure on voters and blurring of the line between the ruling party and the state reduced public confidence in some aspects of the process".

However, the results were rejected by all opposition parties, which announced they would boycott parliament and launch mass protests across the country. Their demand is for major changes to be made within the CEC and for fresh, more transparent elections to be held.

“I’m going to the protest today to defend my vote that was taken away from me on October 31,” said Keti Bakradze, a 48 year-old restauranteur. “We are citizens of this country who pay taxes, serve our dues, and the government cannot just say that they do not care about our votes. A government needs to be legitimate and accountable to the people - the current one is neither.”

Other demosntrators said that they would not be deterred by the ongoing coronavirus crisis.

“For me, going out to protest in the middle of a pandemic crisis is not irresponsible, it’s brave,” said Irina Tsitsishvili, a 21 year-old media student at the University of Amsterdam. “Trying to paint the protestors as immoral and evil is just as harmful as voluntarily staying at home– both mean co-signing the results of the rigged elections.

“If we do nothing now, we become a part of the problem - not the solution. Thousands of people are risking arguably two of the most valuable things - safety and health -because the issue at stake seems bigger than us.”

A coalition of local NGOs, including Transparency International Georgia and the Open Society Georgia Foundation, have called for a recount in a number of districts and for “a lawful and impartial review” of a number of related complaints.

In an open letter, the coalition warned that the government had “failed to ensure the elections adhere to democratic standards,” adding that they had been “the least democratic and free among the elections held under the Georgian Dream government”.

“On election day, there were cases of verbal and physical confrontations in and around polling stations, the observers, and journalists being obstructed and attacked,” their statement continued. “NGOs have reported numerous cases of breaches of the secrecy of the ballot and voter bribery. Just five NGOs, with about 3,000 observers, wrote more than 500 complaints at various polling stations.”

Vakhushti Menabde, head of the election observation mission at the Georgian Young Lawyer’s Association’s (GYLA) – one of the letters’ signatories - said the elections had been marred both by technical problems including disorganisation and overcrowding at polling stations and by corruption and attempts at intimidation.

“Our observers had to work in hostile environments, and there were cases when the situation got very tense because of this,” he said. “Additionally, there were cases outside polling stations of vote-buying – our observers caught people handing out money and [attempting to] control the will of the citizens by mobilising different authorities.”

These included deploying lobbyists and even figures from the crime world outside polling centres, Menabde concluded.

The GYLA have filed complaints related to 38 precincts with the relevant city courts.

The International Society for Fair Elections and Democracy (ISFED), a Tbilisi-based monitoring organisation and another signatory to the NGO coalition statement, also filed a number of complaints with first-instance courts.

Its director, Elene Nizharadze, said that the most serious issue was that they found that the number of voters and actual ballots did not tally in eight per cent of polling stations.

She said that her organisation had called on the CEC to recount ballots in problematic precincts, which they appeared reluctant to do.

“The current situation is that in 162 cases, we ask for the recounting of ballots and they only agreed to deal with ten of them,” Nizharadze said. In Kutaisi, for example, we asked for a recount in ten polling stations and they only recounted in one. This brings more question marks – on what basis do they choose which polling stations to recount - and causes further mistrust . Did they manipulate election material? This approach is completely irresponsible and has intensified the current situation even more.”

She said that ISFED lacked the resources to file all their complaints with the court, and was unsure they would be treated seriously.

“Additionally, there are also question marks and mistrust towards the Georgian Court,” Nizharadze said, adding, “It is shocking that the CEC does not, or cannot, understand the scale of the problem and instead completely ignores it. Consequently, society and [opposition] political parties have a very legitimate reason to assume that elections were rigged.”

When their demand was not met, the rally moved to the CEC offices where protesters were met with water cannons and tear gas.

The following day, a 10pm to 5am curfew was instituted in Tbilisi and all large cities following a rise in the number of coronavirus cases in the country. A joint statement released by ISFED, the Human Rights Center, and Georgia Democracy Initiative claimed this was unconstitutional and aimed at halting ongoing protests rather than taking proportional measures against Covid-19.

Although most of the demonstrators dispersed before the curfew came into effect, a small group of activists known as the Shame Movement continued to protest throughout the night. The government later issued a statement that all those who had stayed on would be identified and charged the 2000 GEL (600 US dollar) fine for violating curfew.

Giving Voice, Driving Change - from the Borderland to the Steppes
Georgia
Elections, Protests
Connect with us