Politicians seem prepared to consider a measure that would guarantee women a quarter of seats in the legislature.

Politicians seem prepared to consider a measure that would guarantee women a quarter of seats in the legislature. 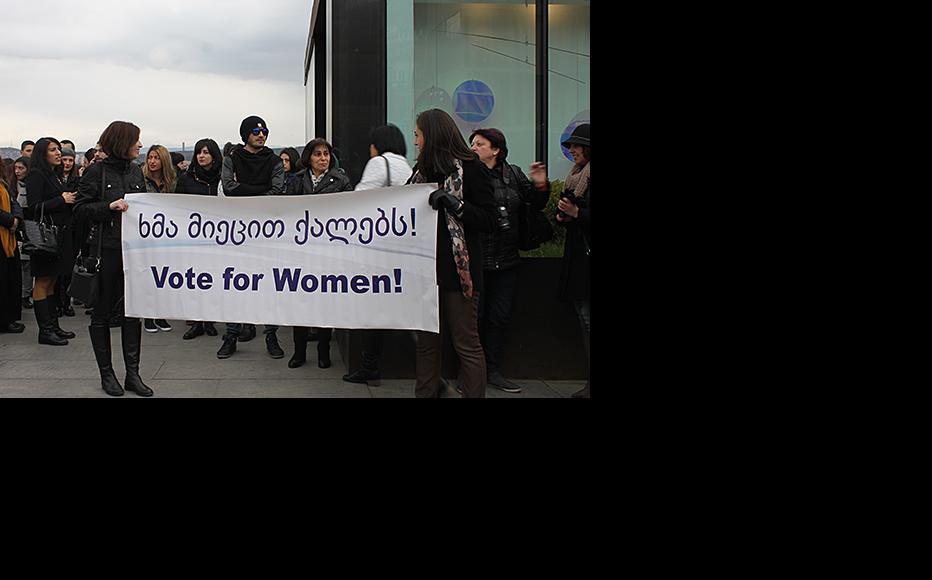 A rally in Tbilisi in support of greater female participation in politics, spring 2015. (Photo: Regina Jegorova-Askerova)
The link has been copied

A movement to increase the number of women in Georgia’s parliament through a quota system is gaining ground.

In September, the parliamentary committee for human rights gave the green light for gender quota legislation to go to the first stage of consideration.

The proposed legislation has been drafted by the Task Force on Women’s Political Participation, a coalition of non-government organisations campaigning for change to a system that currently favours men.

Just 18 of the 150 members of parliament — 12 per cent — are women. This number recently increased from 17 when Eka Kherkheulidze replaced a male politician who resigned his seat. Before the change, Georgia was in 111th place in the world in terms of the percentage of women in legislature, according to the Inter-Parliamentary Union.

Just one of the 15 parliamentary committees is chaired by a woman. The picture is mirrored in other state institutions. Only four of the 20 government ministers are women, including Tinatin Khidasheli, appointed in May as Georgia’s first female minister of defence.

If it is passed, the law will require political parties to adhere to what is called a “zipper system”, where female and male names alternate on the lists of candidates they submit for parliamentary elections.

Georgia uses a mixed electoral system in which 77 of the 150 seats in parliament are filled by proportional representation, with candidates taken from a list according to each party’s share of the vote. The rest are elected using a first-past-the-post system. The zipper system would guarantee that at least 38 women would be awarded seats by proportional representation. This would mean that 25 per cent of legislators were female. The bill makes no special provision for ensuring that women have a chance of winning first-past-the post seats.

Georgian laws support the principle of gender equality, but many citizens still hold traditional views of gender roles. A report on female leadership produced for the United States aid agency USAID lists factors such as the lack of affordable childcare and the limited financial resources that women can bring to an election campaign as reasons why more of them do not enter politics.

In a 2012 paper, Tamar Bagratia and Medea Badashvili noted the additional barriers that women face.

“Because of the dominance of men in political parties in Georgia, they have managed to establish formal and informal rules within the parties,” they wrote. “These rules serve as an obstacle to women’s promotion in their political careers.”

The Georgian government has tried to rectify the situation before now. In 2011, parliament passed legislation for a voluntary quota backed up by a financial incentive. Parties that submitted candidate lists on which 20 per cent were women were promised ten per cent extra in state funding for their campaigns. However, just two parties met that requirement in the 2012 parliamentary election, and neither won any seats.

The law has since been modified, so that parties can claim 30 per cent more funding if at least three out of every ten candidates are women.

Most observer agree that a voluntary system is not enough.

Baia Pataraia, a human rights lawyer and activist, says the mandatory quota is necessary because financial incentives have not worked.

“For swift and efficient results, we demand mandatory party quotas, which in itself brings greater gender equality,” Pataraia told IWPR in an email. “We need quotas to obtain real power, to increase women’s participation to the level where women can change policies.”

Georgia would not be the first country in the region to introduce a quota. Armenia adopted a five per cent mandatory quota for party lists in 1999. The quota has since increased to 15 per cent and tweaks have been made to include a ranking order requirement. The result has been a gradual, but still modest, increase in female representation to the 11 per cent of parliamentary seats.

Georgians seem to be supportive of the idea.

In March, activists from the Georgian Women’s Movement staged rallies and other events across the country to press demands for more women in parliament. (See Quota Calls for Women in Georgian Politics.)

A survey conducted by the National Democratic Institute (NDI) this May found that 68 per cent of Georgians supported mandatory quota for women in parliament.

In a similar poll in October 2014, more than half of respondents agreed that the current number of female parliamentarians was too low, and seven out of ten of them said parliament should have 30 per cent women at a minimum.

“The findings from this poll are extraordinary,” NDI Country Director Laura Thornton said in a press release at the time. “It will be hard politically to ignore these numbers and the electorate's desire for progress and greater equality.”

Prominent politicians have also spoken out in favour of mandatory quotas. Both President Giorgi Margvelashvili, who declared 2015 the Year of Women, and former prime minister Bidzina Ivanishvili have been reported as saying they support the idea.

Eka Beselia, who chairs the parliamentary human rights committee that approved the latest bill, predicts that Georgian Dream will support a gender quota.

"It will not be easy, but we are trying to reach a consensus," she told IWPR. "For me personally it was really a hard way, which I passed alone in politics. With my personal example I showed to women that it is possible to reach any goal, but still others need more support."

The proposal which the NGO coalition has drafted is not, however, the only legislation on the table.

Nana Keinishvili, a Georgian Dream member of parliament, has drafted another bill which differs in that every third name on candidate lists would have to be female, rather than every second.

Keinishvili told IWPR she believed men and women should be represented equally, but that she submitted a watered-down version of the NGOs’ proposal because of opposition from other parliamentarians.

“They are telling me that a clever woman doesn’t need any quotas. It’s hard to convince them,” she explained.

Keinishvili says she still expects a lot of opposition from male colleagues who are concerned that women will replace them in parliament.

Pataraia, the lawyer, agrees that discrimination is entrenched.

“Gender inequality is a systemic inequality deeply rooted in Georgian society. Therefore, affirmative actions such as quotas, are not only justified but even required under international human rights law,” she told IWPR. “Quotas are temporary special measures to achieve substantial, de facto equality.”

Heather Yundt is an IWPR trainer and multimedia producer based in Tbilisi.