Activists decry blanket pardon for all those involved in June 2019 protests.

Activists decry blanket pardon for all those involved in June 2019 protests. 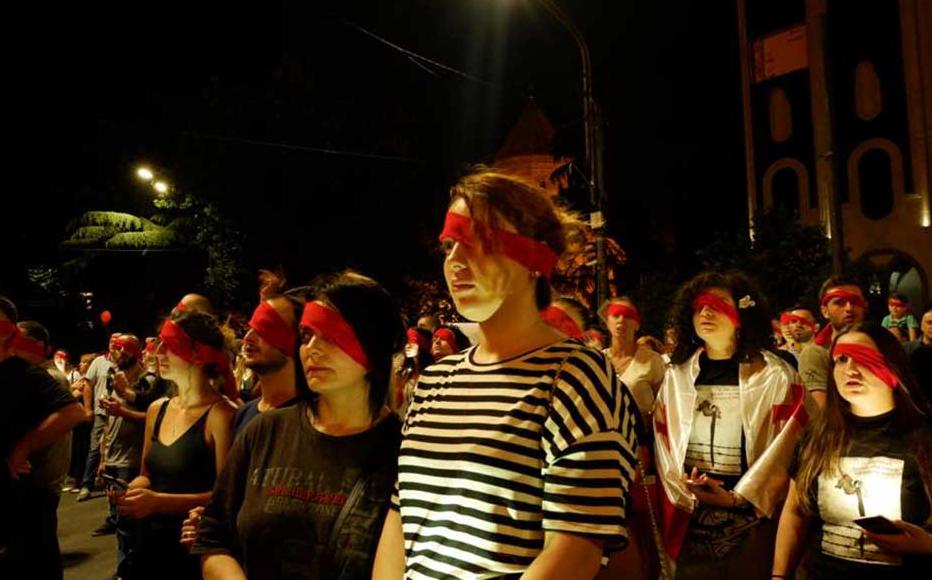 A protest following the infamous night of June 20th, when police forcefully dispersed protestors. © Anastasia Mgaloblishvili
The link has been copied

Ongoing attempts to defuse political tensions in Georgia have reached another stumbling block over a controversial amnesty clause in the EU-brokered agreement intended to calm the crisis.

The April 19 agreement between the government and most opposition parties was aimed ending six months of turmoil which followed the contested 2020 elections.

With the opposition refusing to enter parliament, the crisis reached its peak with the arrest of the United National Movement’s (UNM) chairman Nika Melia in February 2021.

Melia’s detention was related to his role in Georgia’s protests of June 2019, sparked by Russian lawmaker Sergei Gavrilov’s visit to the Georgian parliament.

Alongside electoral, rule of law and judicial reforms as well as power sharing in parliament and potential snap elections, the EU-mediated agreement laid down provision for an amnesty to resolve what the opposition views as the taking of political prisoners.

The document mandated that “the parliament shall initiate an amnesty law for all violations and convictions stemming from the 19-21 June 2019 protests”.

Given that Melia’s prosecution stems from the accusation that he incited violence on June 20, granting amnesty to all actors involved in those protests would also end the case against the opposition leader.

Melia himself, while in pre-trial detention – he has since been released on bail - called on the opposition to oppose the amnesty provision.

“If it is impossible for the amnesty to only cover the so-called Gavrilov protestors, let there be no amnesty at all,” he said.

Civil society activists have organised rallies outside parliament to protest the move, as well as issuing public pleas to EU and US ambassadors to make their criticism heard.

Irakli Pavlenishvili, who was hit with nine rubber bullets on June 20, said the amnesty bill was deplorable.

“June 20 was a rally against occupation in which we were defending Georgia’s dignity and security…. followed with the use of force against peaceful activists,” he said. “For us, it is politically unacceptable for the government to get away with this.”

Two different versions of the amnesty bill were prepared. The opposition produced one which required the approval of injured activists before granting pardons, while the ruling party’s applied amnesty to all actors involved in the protests.

However, the opposition version failed to go through and hearings are now being held on the ruling party’s bill.

In addition, opposition party Lelo has initiated the creation of a parliamentary committee to investigate the June 19-21 events.

“If amnesty is paused for now, the investigatory committee will be held, and the amnesty bill follows that, then creating the committee would make logical sense,” said Natia Letodiani, an activist whose father lost an eye in the protests. “But if amnesty is registered and granted to all the wrongdoers of June 20, then the whole point and logic behind the investigatory committee is lost.”

Letodiani said that she and other campaigners would protect the legacy of the protests.

“We are planning to take active part in the committee hearings on the amnesty bill that are planned in parliament and are also planning a big protest on the second anniversary of June 20,” she said. “We will not give anyone, neither the ruling party nor the opposition, the right to rewrite June 20.”

Giga Bokeria, chairman of the opposition European Georgia party, said that the amnesty bill could only be acceptable if it fundamentally restarted relations with the authorities.

“Of course there are examples in history when both sides reach a political and moral compromise, leave the confrontations in the past, and start relations from a new page,” he said. “Yet if both sides, or in this case one side - the government - continues playing by the same old rules and directly say they won’t stop political repressions, issues a new bill against activists, continues the same propaganda... then nothing really has changed.”

“The main reason why European Georgia did not sign the agreement lies in the fact that the agreement does not answer to the needs that currently lie in front of the Georgian society that could realistically start getting us out of this crisis,” Bokeria said. “The first steps taken after the signing of the agreement proved that it brought more disagreements, and there are no signs of reaching a consensus on fundamental questions – be it snap elections or justice reform.”

Other politicians argued that, although the document was not perfect, it was the best option given the circumstances.

“I believe this agreement is very significant to get out of this tough political crisis, for elections to have meaning again, and to take next steps towards the European Union,” said Salome Samadashvili, a former UNM member who signed the agreement independently. “In the given political environment, this was the most realistic agreement that was possible to reach with maximum compromise. Maybe I wanted more, but taking into account the nature of compromise, this was the maximum that could be achieved.”

Other parts of the agreement have also caused controversy.  Despite its call for judicial reforms, four new judges to the High Council of Justice of Georgia were appointed on May 26.

The EU and US ambassadors, as well as leading NGOs, issued statements arguing that the appointments should only have been made after substantive reforms had been carried out.

Parliament speaker Kakha Kuchava said that it had not been possible to delay the judicial appointments, but that a further five non-judge members would be chosen in the “appropriate political environment”.