Women and girls captured by LRA in northern Uganda struggle to settle back into former villages, while their children, often fathered by rebels, face complete rejection.

Women and girls captured by LRA in northern Uganda struggle to settle back into former villages, while their children, often fathered by rebels, face complete rejection. 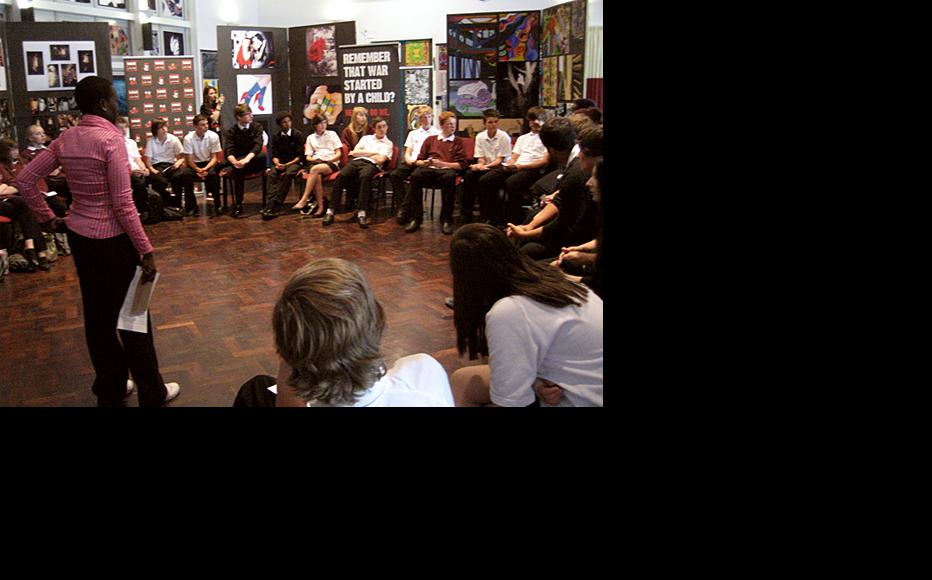 Former child soldier, Juliet, speaks to British students about the plight of ex-LRA captives. (Photo: War Child UK)
The link has been copied

Agnes was abducted by Uganda’s rebel Lord’s Resistance Army, LRA, in October 1996. She was seized along with 138 other girls who were asleep in their beds at St Mary’s college in the town of Aboke in Lira district.

After three months in captivity, Agnes was able to escape during a gun battle between the rebels and the Ugandan military.

Today, she works as a lawyer in the capital, Kampala. Such are the difficulties faced by those seeking to put the 20-year war in northern Uganda behind them, this is a job that many women and young girls who were abducted can only dream of.

“Much as there was the negative impression from the community looking at [me] as a former rebel, as someone from the bush, I looked at that [and said to myself], ‘Yes, it happened, but there is no way I can reverse it,’” Agnes told IWPR’s Facing Justice radio programme.

Agnes provides legal advice to one of the foreign embassies in Kampala. Small and softly-spoken, she cuts a business-like figure in a dark suit with her short, cropped hair.

After escaping the rebels, Agnes managed to turn her life around and decided to train as a lawyer.

“After [my experiences] I discovered my calling and I felt the urge, the need of humanity, doing the least that I can [so] that what happened to me shouldn’t happen to any other person,” she said.

Other women and girls who were abducted by the LRA – many of whom were forced into sexual slavery and to commit horrific acts against their own people – have not been so fortunate.

Five years after the LRA left northern Uganda, experts are warning that the process of reintegration of former female abductees into civilian life remains a big problem.

Many of these women are both feared and discriminated against by their communities, making it difficult for them to settle in their former villages, to marry or find a job.

“In some places, [women] have been reintegrated – they have been accepted, but in a nutshell some of these acceptances were just words,” said Stella Acan, who works with Concerned Parents, a non-governmental organisation formed in 1996 by mothers of girls abducted by the LRA.

“The communities have not forgiven these people from the bottom of their hearts. Discrimination is still very common.”

Those returning from captivity were granted a reprieve – under Uganda’s amnesty act – for any crimes they committed while under the rebels’ control.

Figures from Uganda’s amnesty commission show that approximately 26,000 people have so far been pardoned on returning from the bush. More than 5,000 of these are female – and two-thirds of them are under the age of 27.

Social workers and local leaders in the region say the reintegration process is toughest for women and girls.

“Having been in the bush, [life] is more challenging for girls than boys when they come back,” Betty Aol Ocan, a legislator for Gulu district, said. “Boys can settle, they can be trained, they can start to do their work. [Boys] can get partners very easily. But for our girls I think it has been a challenge.”

Many women lost their husbands in the war, leaving them to raise children on their own. Others returned from captivity with children fathered by rebels and have struggled to find a husband or be accepted back into their families.

“Most of these people have come back with these children without the father’s clan being known,” explained Gladys Canogura, a programme officer at the Kitgum Women Peace Initiative, which works towards reintegrating former female abductees.

“So there is this hesitance to fully accept these people.”

Those who have managed to marry on return often find that their husband later rejects the children that do not belong to him.

“After getting married again these men abuse [their wives],” Acan said. “They start discriminating against their children; they provide only for the children that she bore with them and neglecting the other ones.”

Christine was abducted by rebels in Gulu district in 1992. Her lips, nose and ears were all cut off before she was released.

Today, she sells vegetables at the local market to try to make ends meet.

“[On return] I had no personal property and I was living with a relative,” she told Facing Justice. “Then I started doing casual work and raised some money for rent. I am facing a lot of problems.”

Other former female abductees who spoke to IWPR said that many people living in villages in northern Uganda are afraid of those who were captured by the LRA and forced to fight.

“Some say we shouldn’t be sent back to school because we are already wasted.”

Experts say that much work had to be done to pave the way for those abducted by the rebels to come back home.

“[Those who were captured] never wanted to go to the bush… they never wanted to cause those atrocities but they were forced to do those things. And therefore, [communities] need to accept these girls,” Canogura said.

The amnesty commission is an arm of government which provides support – along with its partner organisations – to those being reintegrating into their former communities. However, it says it lacks money to meet the level of need.

“Fund[ing] is a very big challenge,” Moses Draku, a spokesman for the commission, said. “The amnesty commission does not have enough funds and even many of our development partners do not have funds [to] support some of these females.”

A steady decline in the numbers seeking reintegration has also caused financial support to tail off, Draku added.

The government’s framework to redevelop the north of Uganda in the wake of the conflict – known as the Peace, Recovery and Development programme, PRDP – is meant to offer support to those left vulnerable by the conflict, including former abductees. However, critics say the PRDP is too focused on rebuilding physical infrastructure in the north and is not effectively meeting the social needs of such helpless groups.

“Whenever we look into PRDP, we find it impossible to get things which would address the issue of formerly abducted girls,” Betty Aol Ocan, the Gulu legislator, said. “When you talk about [providing] more schools, health units, roads or even safe water sources, we are happy but we also want you to address the psychosocial support of these girls who [were] abducted.”

Other local leaders say that the government needs to listen more carefully to what people want and shape their redevelopment programmes accordingly. They argue that the government has developed such initiatives without engaging the views and needs of people on the ground.

“It is the responsibility of all of us to go down and ask these people [about their needs]. [That is] the most important [thing that] we need to do. We need to guide these people [in government] because I could say they are not fully informed,” said Billy Graham, a local councillor for Odek sub-county in Gulu district.

The Ugandan government says it has provided programmes to help reintegrate ex-captives, but it admits that it has now shifted its priorities to the development of the northern region.

“The government has a concentrated programme looking at all these aspects of life but it has not forgotten the psychosocial aspect of it.”

Critics, though, say that long-term investment is needed in order to overcome the social and psychological barriers to recovering from the conflict and establishing a durable peace in northern Uganda.

“[The process] needs proper planning,” Betty Ocan said. “It needs all of us to collectively join hands. It should be an ongoing process.”

Arthur Okot, Gillian Lamunu and Bill Oketch are IWPR reporters based in Gulu. They report for IWPR’s Facing Justice radio programme which is broadcast across the region in partnership with the Northern Uganda Media Club.