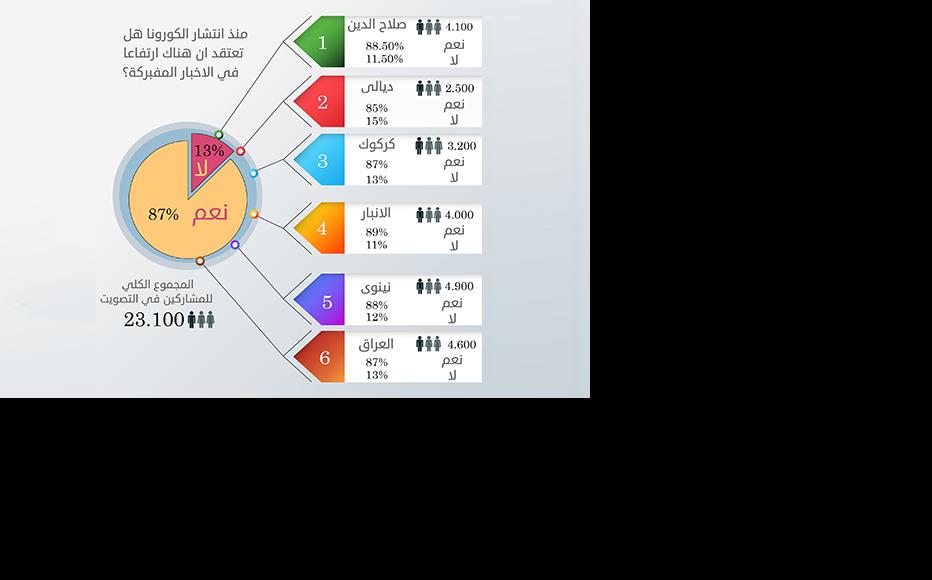 Graphic
The link has been copied

A series of Facebook polls carried out by IWPR in Iraq has revealed concerns over the rise in fake news circulating in the country due to the coronavirus crisis.

The 27 polls were published on around a dozen high-profile Iraqi Facebook pages between April 19 and 23, gathering over half a million votes in total.

Nonetheless, 74 per cent of 21,500 respondents said that they supported the government measures to stop the spread of coronavirus.

As in many other places around the world, rumours and misinformation about the pandemic, the virus itself and possible treatments have spread widely in Iraq.

One persistent theory was that the virus had been invented or exaggerated by the government to put an end to the popular public demonstrations that had been ongoing in Iraq since the autumn of 2019.

Another rumours include that the virus had been created by the US, or was being exploited as a way to allow Islamic State (IS) to return to Iraq.

Most of those who participated in the polls had rigorously observed the curfew instructions, with 75 per cent out of 26,200 voters keeping to the restrictions.

Nonetheless, 67 per cent of 18,600 people who responded to a question about social distancing said that they continued to follow the same greeting habits, such as handshaking, kissing and hugging friends and relatives.

Iraq’s strict curfew measures, which ban public gatherings and travel, have not been sufficient to stop rising cases of the virus.

According to the most recent figures from the ministry of health, the total number of infections reached 13,481, including 370 deaths, while 7,539 active cases were being treated.

Coronavirus Pandemic, The Infodemic
Iraq
Disinformation, Coronavirus
Connect with us