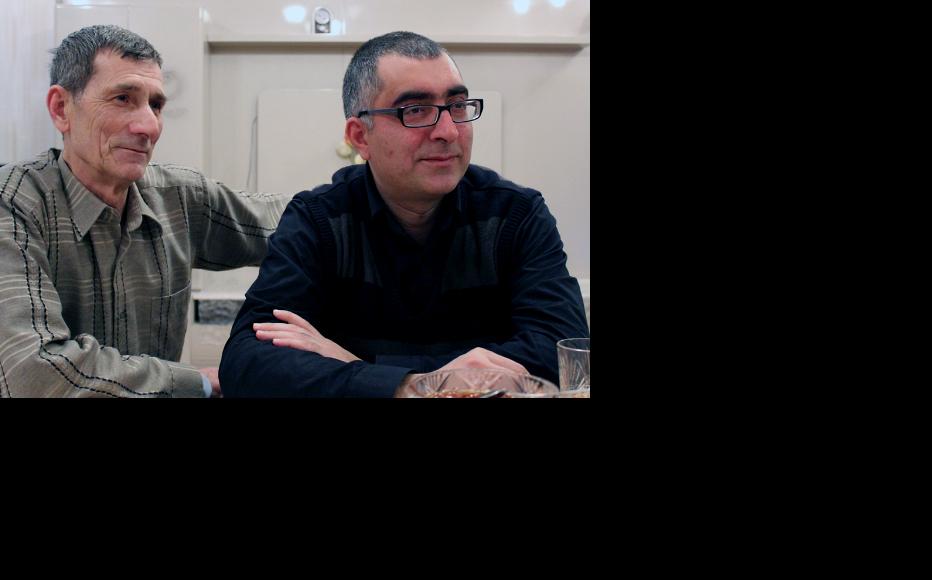 Anar Mammadli (R), a prominent human rights defender was one of the pardoned detainees. (Proto: Ismi Shahzade)
The link has been copied

Analysts say that a mass prisoner amnesty in Azerbaijan may be intended as a concession ahead of President Ilham Aliyev’s upcoming visit to the US, where Congress is considering sanctions against senior regime figures.

More than a dozen political prisoners were among the 148 detainees pardoned by a presidential decree signed on March 17, on the eve of the spring Novruz holiday.

They included the prominent human rights defenders Anar Mammadi and Rasul Jafarov as well as figures from the opposition Musavat party including deputy chairman Tofig Yagublu.

International bodies including the European Union and the Organisation for Security and Co-operation in Europe (OSCE) welcomed the amnesty.

“This is a positive, welcome step by Azerbaijan in relation to the country´s OSCE commitments,” said Michael Georg Link, director of the organisation’s office for democratic institutions and human rights, in a March 19 press release.

But Link noted that many other human rights defenders were still at risk.

“I would call on the authorities to review the cases of others either currently imprisoned or under such restrictive orders, including Intigam Aliyev, Khadija Ismayilova, Ilgar Mammadov and Ilkin Rustamzada,” he said.

NIDA board member Ulvi Hasanli said that while he was delighted by the release of his colleagues, much more remained to be done.

“There is a need for fundamental changes in the country, freedom of assembly, the media … Arresting people on false charges, then to ´pardon´ them after five to six years and release them cannot be considered an example of humanitarianism,” Hasanli told IWPR.

Repression has been on the rise ever since the last presidential election in October 2013.  Dissenting journalists, rights activists and opposition politicians have been harassed or imprisoned, while international NGOs have had to close their offices.

Many in the West have condemned these measures. In mid-December, Republican lawmaker Chris Smith introduced a landmark bill in the House of Representatives that would deny US visas to senior members of the Azerbaijani government and their relatives due to Baku´s human rights violations.

Akif Gurbanov, head of the Institute for Democratic Initiatives, theorised that Aliyev had pardoned the political prisoners to avoid Azerbaijan being hit by sanctions.

“On March 31, Ilham Aliyev is to take part in the [nuclear] security summit, which takes place in America,” Gurbanov told IWPR.  “The president could not go to such an important event empty-handed because the results could be very bad for the authorities.  Therefore, Ilham Aliyev decided to show an act of ´ humanitarianism’ and release a number of political prisoners.

“Unfortunately, this is just for show for the West, but in fact the authorities are not prepared for national reconciliation,” he concluded.

“Only 10 per cent of the political prisoners were released,” agreed Ogtay Gulaliyev, head of the social alliance Azerbaijan Without Political Prisoners, according to the news website panorama.am.

Fresh arrests were made regularly, he continued.

“That is why the number of the political prisoners in Azerbaijan has remained at around 100 for five or six years already,” Gulaliyev said.

As if to illustrate this process, another opposition figure was sentenced to three years in jail just before the amnesty. Mammad Ibrahim, an adviser to the leader of Azerbaijan´s opposition Popular Front Party, was found guilty of hooliganism by a district court in Baku on March 15.  Ibrahim, who was arrested last September, pleaded not guilty and said the case against him was politically motivated.

On the day the amnesty was announced, the appeals court in Baku threw out the six-year jail term handed to journalist Rauf Mirkadirov last December on charges of spying for Armenia.

Mirkadirov was detained in Turkey in April 2014, where he worked as the correspondent of the Baku-based Russian-language Zerkalo (Mirror) daily, and deported to Azerbaijan.

He was released directly from the courtroom last week after being handed a five-year suspended sentence.

As he left, he told reporters that he rejected the charges against him and would fight for his full rehabilitation.

His lawyer, Fuad Agayev, told Meidan TV that they had asked for a full acquittal.

“We do not agree with the sentence.  Although this sentence is better than the first - at least Rauf was released,” he said.

Human rights defenders Leyla and Arif Yunus were also accused of espionage for Armenia and detained in April 2014.  According to their indictments, Leyla Yunus recruited individuals who provided a variety of information to the Armenian security services.  Mirkadirov was allegedly one of them.

In August 2015, Leyla Yunus was sentenced to eight-and-a-half years in jail and her husband Arif to seven years, later reduced for both to five years on probation.

“Their condition is very serious,” said their lawyer Elchin Sadigov, who is to lodge an appeal. “The illnesses of both can be life threatening.”

Gurbanov said that the cases of Mirkadirov and the Yunuses illustrated how the regime was only willing to make gestures towards change.

“The authorities of the country maneuver as always and do not show their true intentions.  To free Mirkadirov and not acquit him, release Leyla and Arif Yunus and not let them out of the country, to pardon those political prisoners who have already served a lot of time,” he continued.  “To appease the west, the authorities of Azerbaijan are only ready for such a small compromise.  The authorities are not even thinking about real change and about real democratisation.”

Azerbaijan
Detentions
Connect with us