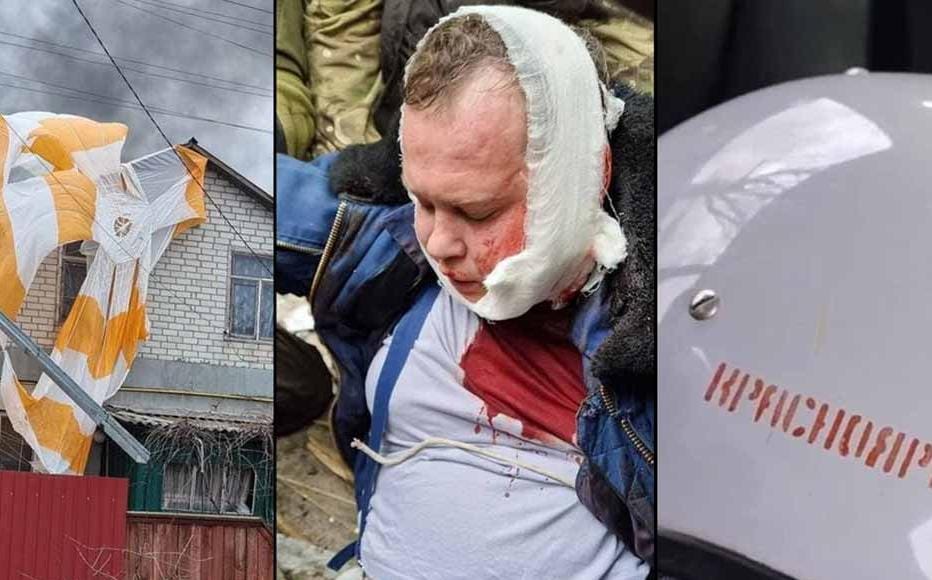 Krasnoiartsev, a 36-year-old  senior pilot from Orenburg. © Suspilne Chernihiv
The link has been copied

Two further trials in absentia of Russian soldiers for violating the laws and customs of war are in progress in the northern Ukrainian region of Chernihiv.

Tank commander Leonid Shchotkin and pilot Oleksandr Krasnoiarts were both freed in prisoner exchanges earlier this year and will stand trial in absentia.

The Desniansky district court in Chernihiv received an indictment against Shchotkin, a serviceman of the armed forces of the Russian Federation. The tank commander is accused of giving the order to shell a civilian house in Chernihiv.

Shchyotkin, a 35-year-old major, is from the Udmurt Republic and serves as a tank battalion commander in the 41659 military unit, stationed in the Altai region in the city of Aleisk.

The published suspicion states that in the morning of February 24, as a member of the crew of a T-72B tank and as part of a military convoy, Shchyotkin crossed the state border of Ukraine from the Belarus in the area of Senkivka village, Chernihiv region.

On February 26, his tank drove along Kiltseva street in the city of Chernihiv in the direction of the airfield. The Russian military then fired at random.

According to the investigation, Shchotkin ordered the tank gunner operator, Sergeant Mykhailo Kulikov, to turn the turret and fire an aimed shot with a high-explosive projectile at a residential building on 43 Rapoport street. The high-rise, 253 metres from the tank, was not a legitimate military target.

According to expert conclusions, two flats and the maintenance floor above one of the apartments were damaged as a result of a direct hit by a high-explosive tank projectile, part of which investigators found at the site of the explosion.

On the same day, February 26, Shchotkin and Kulikov were captured by the Ukrainian military and their tank was destroyed.

On August 8, Kulikov was sentenced to ten years in prison and fined 26,000 hryvnias for executing the order to fire on the residential building.

The soldier pleaded guilty and in court asked for forgiveness from the owner of the damaged apartment and the Ukrainian people in general.

“I apologise to the residents of Ukraine for invading here like this. It was wrong on our part," Kulikov said.

He said that he had carried out the order because Shchotkin had shouted that there was a hand-held anti-tank grenade launcher at the site.

At the time of Kulikov's trial, Shchotkin was no longer in Ukraine as he had been freed as part of a prisoner exchange. The court will therefore consider Shchotkin's case in absentia, and a lawyer was appointed to represent him.

He is charged with part one of Article 438 of the criminal code of Ukraine on the violation of laws and customs of war, which provides for a prison term of between eight to 12 years. The other case under consideration by the Chernihiv court is that of Krasnoiartsev, a 36-year-old  senior pilot from Orenburg who is head of air-fire and tactical training of Russian military unit 86789.

He took part in the early March bombing raids of residential areas in Chernihiv with unguided FAB-500 aerial bombs. A total of 47 people died as a result of the Russian bombardment of the city.

Krasnoiartsev is charged with part two of Article 438 of the criminal code of Ukraine on the violation of the laws and customs of war, combined with intentional murder. This provides for a prison term of ten to 15 years or life.

After being taken prisoner in March, Krasnoiartsev gave an interview to Ukrainian blogger Volodymyr Zolkin in which he related that he had also flown a SU-34 fighter bomber on some 200 sorties in Syria since 2015.

"I can't say for sure," he said when asked about the number of warheads he fired during this time.

The pilot made his first Ukraine flight on February 28 from an airfield in the Briansk region, heading to the airport area in the area of Kyiv.

The second sortie, according to the pilot, took place on March 4.

"They set a task: on the map, it was south of the settlement of Chernihiv, there was a road outside the city, [the plane] was loaded with eight high-explosive aerial bombs, the radius of destruction was one and a half kilometres," he told the blogger.

The pilot claimed he was told that the purpose of each of his flights was to destroy weapons and military equipment.

Krasnoiartsev made the third sortie with a combat charge of SIX high-explosive shells on March 5. On the same day, he was captured after his plane was shot down.

According to the provided coordinates, the pilot needed to bomb a point two to three kilometres north of Chernihiv. But he admitted that the Russian military used old maps and said that he realised only later that he had bombed the city.

“When approaching the target, gaining altitude for bombing, I felt a blow from the rear side, the plane began to sway with increasing amplitude,” he said. “I tried to straighten it out, but I didn't succeed - the plane didn't obey the controls. The navigator activated the means of emergency escape from the aircraft. I left the plane, went down on a parachute to some house, fell on the fence, rolled down.

“Already behind the fence I heard, ‘Russian, come out!’ I ran, jumped over the fence, looked at the gate, there were a lot of people there. I ran behind the house, and a man ran after me, trying to catch up with me.

Krasnoiartsev shot the man several times with his combat pistol before hiding in a barn.

The published suspicion states that a 42-year-old resident of Chernihiv died on the spot from massive blood loss following a gunshot wound to the chest.

Pilot Konstantin Kryvolapov, who ejected together with Krasnoiartsev, died in the fall.

In July, the Desniansky district court gave permission to conduct a special pre-trial investigation in Krasnoiartsev’s case. It then became clear that the captured pilot was not in the territory controlled by the Ukrainian authorities and had most likely been exchanged.

In October, the head of intelligence of the ministry of defence of Ukraine, Kyrylo Budanov, confirmed Krasnoiartsev's exchange.

"We already exchanged pilot Krasnoiartsev four or five months ago. We exchanged him for our pilots. If I'm not mistaken, for five people," he said.