Political and economic dependence means that Nur-Sultan has been reluctant to condemn ongoing persecution.

Political and economic dependence means that Nur-Sultan has been reluctant to condemn ongoing persecution. 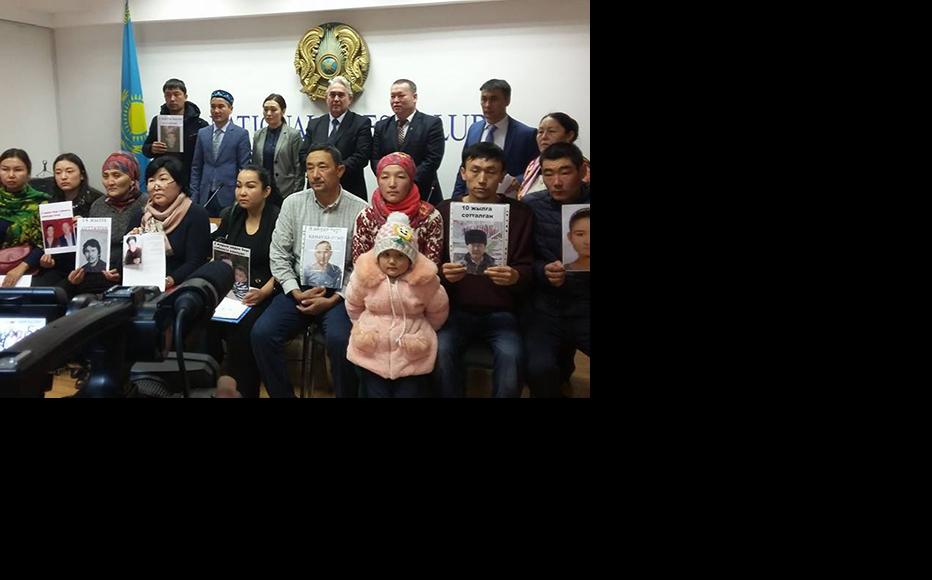 Ethnic Kazaks from China with pictures of their disappeared relatives in Xinjang region. (Photo courtesy of Bureau.kz)
The link has been copied

Ethnic Uighurs and Kazaks who fled repression in China to seek safety in Kazakstan say that they still feel unsafe in their historic homeland.

Around 1.25 million ethnic Kazaks live in China, the result of a migration that began in the seventeenth and eighteenth centuries. The Beijing crackdown means that tens of thousands have been detained, while many others have taken the decision to move to Kazakstan.

However, Kazakstan’s political and economic reliance on China means that Nur-Sultan has been reluctant to condemn the ongoing persecution of Muslims in the Xinjiang-Uighur Autonomous Region (XUAR).

During a visit to Kazakstan in early February, secretary of state Michael Pompeo called for solidarity with those suffering in the XUAR.

“The United States urges all countries to join us in pressing for an intermediate end to this repression,” he said. “We ask simply for them to provide safe refuge and asylum to those seeking to flee China.”

The following day the Chinese ambassador to Kazakstan, Zhang Xiao, declared Pompeo’s comments to be “a staged performance” and denied that there was discrimination against Uighurs in the XUAR.

“There are over 25,000 mosques in Xinjiang, which is more than in the United States, United Kingdom, France and Germany combined, that is one mosque per 500 Muslims, which is more than in many Muslim countries,” he wrote on Facebook. “Ignoring the main facts about Xinjiang and continuing to throw mud at China, Pompeo has demonstrated to the world his own ideological biases and prejudice.”

Kazak president Kassym Zhomart-Tokayev has tried to avoid being dragged in to this conflict. He told Deutsche Welle recently that the international representation of so-called political re-education camps, which Beijing describes as vocational training centres created to counter extremism, did not reflect reality.

“We understand this is a part of geopolitics as China and the United States confront each other in a trade war. Time will tell the outcome of negotiations, whether the [US] sanctions against China will be removed. However, Kazakstan should not become a territory of the so-called global anti-Chinese battlefield,” Tokayev said.

“In Kazakstan, they say that Uighurs in Xinjiang have no problems,” said Kakharman Kozhamberdy, a key advisor to the World Uighur Congress who lives in Kazakstan. “No one speaks openly about this problem, even the members of parliament on behalf of the Assembly of Peoples of Kazakstan. Although they know about this problem, they just don’t want to have more problems. Kazakstan cannot compete with China. There’s no exact information about the number of ethnic Uighurs in the country who lost contact with their relatives in China.”

Bakhargul Tokhtakhunova, an ethnic Uighur who lives in Kazakstan, agreed that people in her community were afraid to contact their relatives in China because of the crackdown.

“We miss them and want to go there, but it’s very dangerous,” she continued. “Even if you are a citizen of Kazakstan, you can be detained for a few months just to be checked. Our acquaintances’ daughter was detained in the camp in China just because she had a photo that was taken abroad.

“It’s all a nightmare. I cannot say what we feel. Last time I was there was in 2007 and we want to know if our relatives are alive or not,” Tokhtakhunova concluded.

The crackdown in the XUAR has led to mass surveillance of Muslims, with facial recognition cameras rolled out across the region and electronic communications routinely tracked.

In 2018, the UN stated that up to a million Muslims from local communities were being detained in the camps. According to international organisations, there were about 80 such facilities in the region.

Locals and former inmates of these camps report that wearing hijab, attending mosques, praying and giving children Muslim names have all been banned in this part of China.

After Nurlan Kokteubaev retired from his job in a Xinjiang school a year ago, he decided to move to Kazakstan with his family.

But a few months later, he and his wife visited China again.

“At first, my wife left, and I left a month later. As soon as I arrived, I was charged with terrorism, and was placed into the camp where 40 people lived in one room. All of them were Uighurs, there were few Kazaks… Then I had health issues, I had a seizure. The prison is fully equipped with CCTV and TVs where they praise Xi Jinping in Chinese, to show how he helps the global community, to show how the communist party of China does good deeds for us, etc,” Kokteubaev said.

Mekhriban Amirova moved from China to Kazakstan with her husband and children and now lives in the Almaty region. Her husband went back 18 months ago to sell their house but never returned.

“He called via WeChat, said he was studying patriotism and everything was fine, but I understood what he meant,” she said. “He didn’t want us to visit him, but they must be forcing him to tell so. His voice was trembling and he said everything would be fine. We have many relatives, friends who have been placed to the camp because they knew us and [apparently] we left for abroad because we are spies.”

She is waiting for her husband to return and hopes he will be granted Kazak citizenship.

“Our daughters don’t want to go to China, as we’ll be placed in the camp immediately. If we don’t get Kazak citizenship in time, we’ll go to Turkey because they won’t deport us from there, that’s for sure,” Amirova said.

Political analyst Nurlan Tileubaev said that even ethnic Kazaks viewed Kazakstan as a place of transit to get asylum in another country, fearing that they could be deported to China.

He continued, “Many Uighurs, even those who have relatives in Kazakstan, have to leave for Malaysia, Turkey, Indonesia and Myanmar, because Kazakstan does not want to sour relations with its neighbours.”