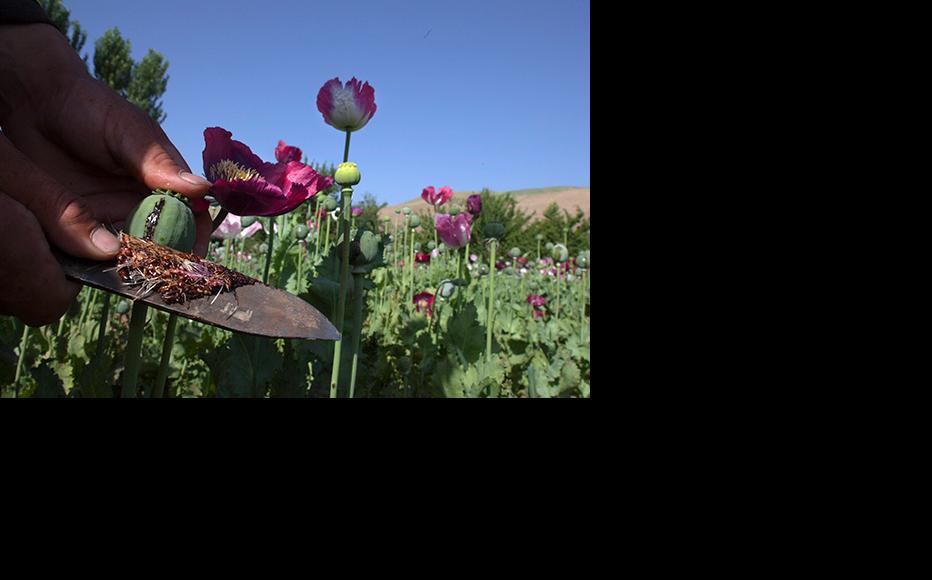 Poppy production is on the rise in Nimroz province. (Photo: Paula Bronstein/Getty Images)
The link has been copied

Drug cultivation and trafficking are soaring in the western Afghan province of Nimroz, with officials also warning of a growing crisis in local rates of addiction.

Nimroz is a highly strategic area for smugglers because it shares a 235-kilometre border with Iran and lies just to the north of Pakistan as well as adjoining Helmand province, where half Afghanistan’s opium is produced.

Abdul Qayum Karimi, the public awareness officer of the provincial department of counter-narcotics, said that poppy had been grown on nearly 5,330 hectares of land in Nimroz in 2016. Working closely with the security forces, Karimi said that his department had been able to destroy just 18 of these hectares.

They are clearly fighting a losing battle. Last year the number of hectares sown with poppy soared to nearly 11,470, mainly in the districts of Khash Rod, Chahar Barjak, Chakhansur, Kang and around the provincial capital Zaranj.

Locals warn that it’s not only cultivation and smuggling that have increased. The province’s resources are being further burdened by high levels of addiction, attributed to the large numbers of returning migrants who develop a habit while working in Iran.

Haji Abdul Ghani, a 60-year-old tribal elder, said that many youngsters left Afghanistan to try and find work in Iran, where they frequently began using drugs including heroin, crystal meth and crack cocaine.

Back in Nimroz, drugs were sold openly and with the collision of local officials, he continued, adding that better employment opportunities at home would lead to fewer young people both leaving Afghanistan and falling into addiction.

That was the experience of Fazal Ahmad, a 23-year-old from Nimroz, who said that although he was a high school graduate he had been unable to find employment in his own country.

He travelled to Iran to find work, where his employer introduced him to drugs.

“Whenever I finished work I was extremely tired,” he said, recalling that his boss then gave him pills to make him feel better. Over the passage of time he became an addict and was eventually arrested and deported by Iranian police.

Another young man, 22-year-old Waheed, said he had had a similar experience. Unable to find work in Afghanistan, he travelled to Iran to try his luck there.

“Because I was working so hard, I used to feel exhausted, and my employer suggested I take these tablets which he said would relieve my tiredness,” Waheed said. “The tablets turned me into a drug addict instead of helping me.”

Provincial council member Haji Masood Hakimi agreed that drug addiction had reached crisis point in Nimroz due to young men returning from Iran, who then funded their habits through armed robbery and other crimes.

Large swathes of Nimroz remain under Taleban control, which also helps ease the flow of contraband.

Mohammad Sidiq Chakhansuri, the deputy head of the provincial council, said that drug traffickers were exploiting these lawless areas.

“Caravans of drugs pass through the most insecure areas of Khash Rod district in Nimroz province, Musa Qalah in Helmand and Bakwah in Farah and transport the drugs onwards to Pakistan,” he said.

Chakhansuri warned that there were no practical measures in place to try to stem this flow.

“All the plans produced by officials from Nimroz’s department of counter-narcotics have just been symbolic,” he said. “They don’t come up with practical solutions to these problems.”

He also said that mafia groups operated their smuggling operations with impunity, while drugs were bought, sold, and used openly across Nimroz.

Local activist Eidi Mohammad Musadiq noted that the Delaram–Zaranj highway, built in 2009 and one of the country’s busiest roads, served as a crucial smuggling route from Afghanistan to Iran, Pakistan and beyond.

Musadiq added, “The transit possibilities for narcotics via the Nimroz-Delaram and southwestern highways should be destroyed so that it will no longer be a stain on our reputation.”

Nimroz police spokesman Mohammad Umari denied that local officials had no plan to counter the flow of drugs, adding that this forces had already prioritised a strategy to target narcotics traders in the provincial capital.

“Nimroz police headquarters have planned an operation to clear Zaranj city of drug dealers,” he said, adding that it was likely that this scheme would be expanded to the districts as well.