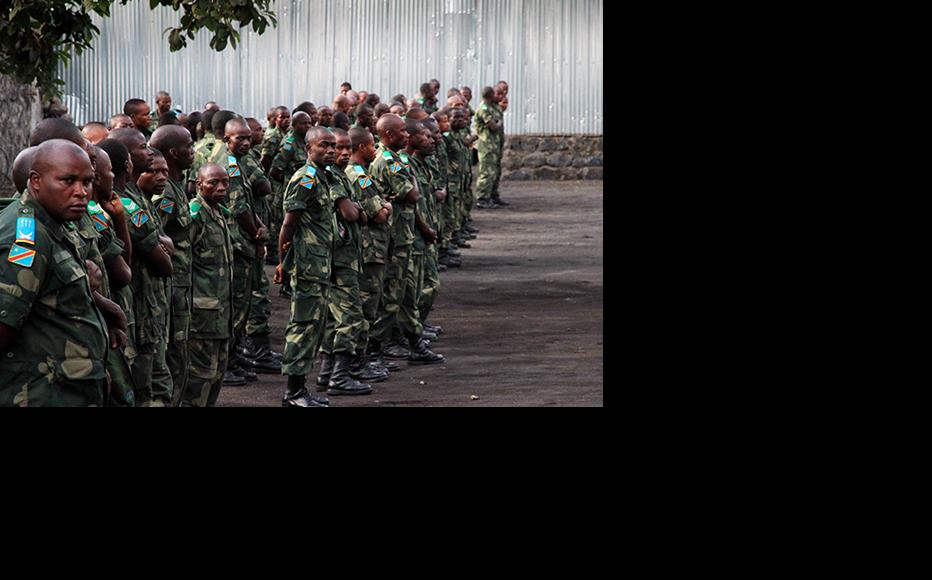 Congolese troops at an army base in Goma, North Kivu. (Photo: Mélanie Gouby)
The link has been copied

The authorities in the Democratic Republic of Congo (DRC) are triumphant at the defeat of the M23 rebel group, but analysts warn that other rebel groups will need to be subdued if peace is to be achieved in the east of the country.

The DRC’s army, known as FARDC, announced it had defeated the rebel group in early November, after an insurgency lasting 18 months. It was the Congolese army’s first victory over a significant rebel group, and was achieved with the help of a special 3,000-strong unit, the Force Intervention Brigade (FIB), established within the United Nations peacekeeping force MONUSCO.

Shortly after the army declared victory, M23 announced that it was ending the insurgency in favour of “purely political means” for pursuing its goals. A peace deal was due to be signed last week, but disagreements over the wording meant that did not happen .

Ben Shepherd, an expert on central Africa at the Chatham House think tank in London, told IWPR that building on the M23 surrender would depend on whether the remaining militias were also defeated.

“There remains a veritable alphabet soup of other rebel groups, ranging in outlook,” he said, in a reference to the acronyms used by the various militias.

The aid agency Oxfam has said there are up to 30 rebel groups operating in eastern DRC. Renewed confidence in the army has raised hopes that it could now set about routing these other factions.

Dan Donovan, a regional analyst for the Foreign Policy Association, said the victory had “demonstrated the effectiveness and cooperation of Congolese forces and [the UN], delivering a warning shot to other rebel groups that they can be defeated”.

In November 2012, M23 was strong enough to take the provincial centre of Goma, but in more recent months, it has suffered from internal disputes and dwindling support. After one power-struggle, its leader Bosco Ntaganda crossed into Rwanda and surrendered this spring, and was sent to The Hague to face trial by the International Criminal Court for a string of alleged war crimes.

The Congolese national army, known as FARDC, exploited these weaknesses with the assistance of the Force Intervention Brigade, which was equipped with a tougher mandate than any other UN peacekeeping force.

Prior to the FIB’s deployment, MONUSCO had been criticised for failing to prevent rebel attacks and to effectively intervene in battles, despite having 18,000 troops on the ground.

The national army’s own operations were undermined by a lack of discipline and poor motivation within its ranks. But the recent streamlining of FARDC’s command and efforts to ensure that wages are paid on time have helped boost morale.

Nevertheless, a UN source who spoke on condition of anonymity warned that FARDC still had only limited capacity.

The UN source also warned that the very effectiveness of the FIB’s intervention might make the UN’s regular peacekeeping forces less effective instead of more so.

“[FIB’s] success has further dissuaded other MONUSCO contingents such as Pakistani and Indian peacekeepers from undertaking more proactive activity to safeguard civilians from rebels,” the UN source told IWPR. “Instead the FIB is increasingly referred to for tasks other MONUSCO forces cannot or will not perform, and now presents a ready excuse for inactivity.”

NEXT UP, THE FDLR

With M23 out of the way, one of the main militias remaining in the east is FDLR, or Democratic Forces for the Liberation of Rwanda.

The FDLR has operated in the east for over a decade. Formed by Hutu forces which fled Rwanda after the 1994 genocide which killed approximately 800,000 Tutsis and moderate Hutus, it is thought to rely largely on income from mining in North and South Kivu. In 2009, a panel of UN experts estimated that the militia was making millions of dollars a year from the trade in minerals.

Kinshasa is now keen to consolidate its military gains by pursuing the FDLR, again with backup from MONUSCO.

Given the FLDR’s prominence and links to other rebel factions, a successful operation against this militia could “facilitate efforts to tackle other remaining armed groups”, according to Maria Eriksson Baaz of the Nordic Africa Institute in Sweden.

But while the 1,500-strong FDLR has carried out few notable attacks in recent months, it remains a well-trained, well-armed and structured group that occupies remote territory.

Stephanie Wolters of the Institute for Security Studies in South Africa, describes the FDRL as a “much harder opponent” than M23, pointing out that its long-term presence in the region has given it local connections and a sound knowledge of the terrain.

“The defeat of M23 may result in some defections [within FDLR] but the hard core will fight on and will likely endure a protracted campaign,” she said.

One major complication is that DRC’s government is said to have delivered support to the ethnically Hutu FDLR in the past to enable it to fight against M23, which largely consists of Tutsis.

According to Thierry Vircoulon, an expert on central Africa with the International Crisis Group, there are still “residual contacts” between elements of the national army and FDLR forces. Such contacts could undermine any future military operations.

“This may create difficulties for the FARDC in terms of operational security,” the UN source said.

As the government switches its attention to the FDLR and other groups, there are questions about what should happen to former combatants from M23.

Despite last week’s false start, a formal peace deal is still expected to be signed, analysts are warning against repeating the mistake of integrating former rebel fighters into the FARDC.

They say this strategy has been tried before and has manifestly failed. (For more, see Will Kinshasa Go Easy on M23 Rebels? http://iwpr.net/report-news/will-kinshasa-go-easy-m23-rebels .)

Most of the M23’s fighters used to belong to another mainly Tutsi rebel group, the CNDP (National Congress for Defence of the People,), and were incorporated into the national army after a peace deal signed on March 23, 2009 (hence the group’s name). They defected in April 2012, complaining that the government had not kept its promises to them.

“Some of the M23 core may have been integrated into the FARDC three times and have deserted three times,” Shepherd said. “This revolving door has proven hugely damaging to FARDC morale and would be disastrous to repeat. It also remains essential to break the pattern of securing advancement through arms and this breakage must begin somewhere.”

There are signs that the government may have learnt from these experiences.

Foreign Minister Raymond Tshibanda has signalled a tougher stance against former combatants, insisting that some will be prosecuted, particularly those at the top of the command structure like military chief Sultani Makenga, currently in custody in Uganda.

“Makenga must answer for the crimes he has committed,” Tshibanda said. “In any case, in the discussions we held in Kampala, it was clear there would be no amnesty for war crimes [or] crimes against humanity.”

Vircoulon said there was scope for prosecuting top leaders.

“Given the fact that the military commanders of the M23 have a 20-year war history behind them in the region, there is plenty of room for prosecution,” he said, adding that he was optimistic that the government would not try to appease the rebels by re-absorbing them into the army.

He said the government’s new-found confidence meant it was “closing the door” on such former tactics.

“Now that the DRC government is in a position of strength, the message is that armed groups and rebellions won’t be politically and militarily accommodated any more,” he said.

Others believe that reintegration is still a possible solution for rank-and-file combatants, as long as they are not deployed on their home ground in North and South Kivu.

Wolters said that while ethnic Tutsis from M23 might be unwilling to serve outside the region, redeploying and distributing them among different army units might be a better option than allowing them to remain intact where they were.

“If the former rebels are separated from one another, their ability to pose a threat is much reduced, and this strategy is essential if the mistakes of the past are not to be repeated,” Wolters said.

Donovan argues that a solution might be found through a combination of exiling the M23’s senior leadership and – as Wolters suggests – strategically reintegrating the footsoldiers.

“If the core M23 leadership can be exiled and marginalised, the M23 rank and file may be reintegrated and dispersed in separate groups outside of North Kivu, avoiding large concentrations of Tutsi soldiers with M23 loyalties,” Donovan said.