People suspect shifting deadlines for new housing and other infrastructure are an election tactic intended to make them grateful.

People suspect shifting deadlines for new housing and other infrastructure are an election tactic intended to make them grateful. 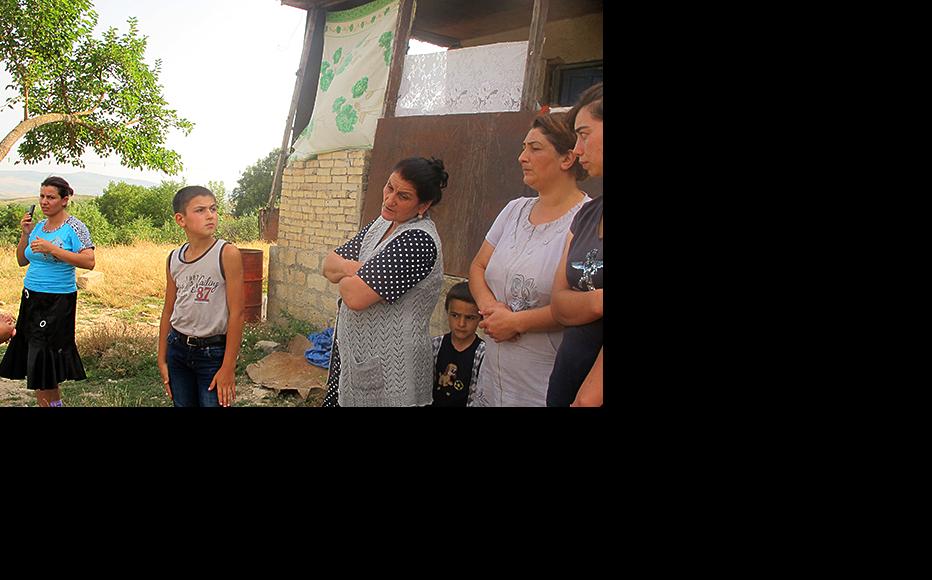 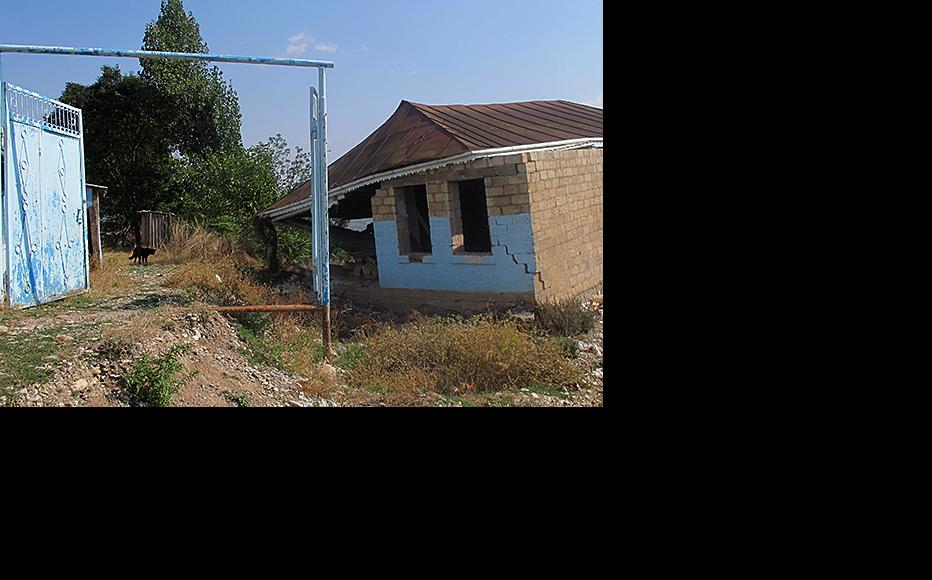 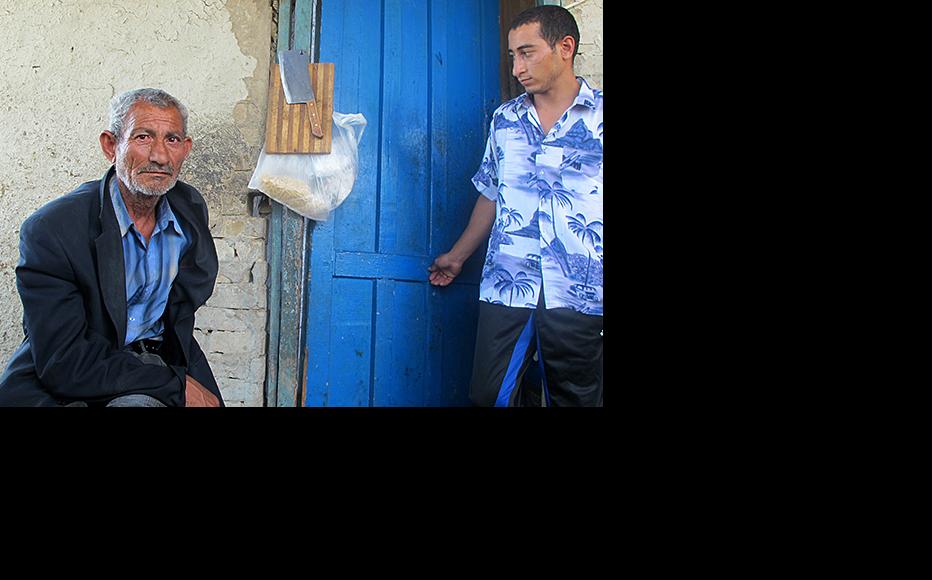 Hemiyyet Safarov and one of his children. (Photo: Samira Ahmedbeyli) 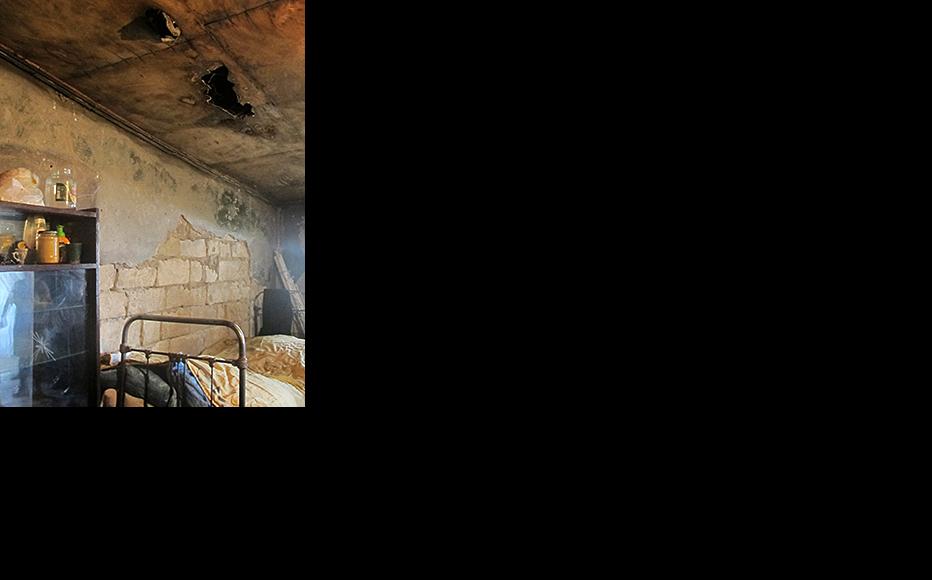 Damaged property in Muganly. (Photo: Samira Ahmedbeyli)
The link has been copied

Residents of a badly damaged village in central Azerbaijan who have waited four years to be resettled are hoping that they might at last be moved into the new homes they have been promised.

There is a catch, though – many believe the move has been deliberately delayed to coincide with the October presidential election, as a way of effectively buying their votes.

President Ilham Aliyev is hoping to win another term, and few doubt he will secure re-election despite opposition efforts to field one or more candidates.

The village of Muganli in the Shamakhi district, some 120 kilometres west of the capital Baku, was hit by a landslide in April 2009. At least 40 homes were badly damaged or destroyed.

Soon afterwards, the authorities promised that the residents would be provided with new homes. Further seismic movement has taken place since then, and more homes have suffered damage. After one such landslide, Azerbaijan’s emergencies minister Kemaleddin Heydarov announced in March 2012 that people were risking their lives by staying there and needed to be resettled as soon as possible.

Since there was no sign of the promised homes being built, residents who had initially fled the village returned to live in buildings that were at imminent risk of collapse.

“With the first landslide four years ago, our house became precarious. Experts said we needed to move out as we’d be risking our lives staying in the house,” retired teacher Gullu Rahimova said. “Our family of seven spent a long time shuttling between different relatives. But the new home never materialised, so we were forced to come back to this dangerous house.”

Hemiyyet Safarov is in the same position, and is especially concerned about the risks he is exposing his small children to.

“How many relatives would stand having us and our kids for four long years? We stayed with relatives for a few months in anticipation of moving into a new house. But we haven’t seen hide nor hair of that. So we’ve come back to our own home,” he said. “The walls might cave in at any moment. I am very afraid for the children – who’d answer to us if anything happened to them?”

Despite official expressions of concern, construction of the new homes did not get under way until September 2012. Over the last year, a new development consisting of 63 homes plus schools and other facilities has sprung up in the nearby town of Meyseri.

“We keep going to the [local] government office to ask when they’ll move us. But we never get a sensible answer,” Rahimova said. “We’ve been waiting for four years. If the houses are ready, why won’t they move us?

When IWPR asked Muganli’s local government head, Tayyar Sheydayev, about the move, he replied, “Construction of the houses is complete and the communications are now being laid. I don’t know when they’ll move people in.”

Sheydayev’s deputy Qasim Qasimov was more forthcoming, saying the move would take place as soon as the builders said it was ready.

The building contractor, said that aside from Meyseri settlement, new homes had been built in seven villages for people whose homes were damaged in landslides last year.

“Twelve of these 16 homes have already been occupied,” he noted. “In the settlement for the Muganli people, the houses and infrastructure are ready, and the utilities are connected up. All that still needs to be finished off is the surface communications [roads].”

Amiraslanov was unable to give a date for when everything would be ready.

Some of Muganli’s residents suspect things will be dragged out until close to election day, set for October 9, so that the grateful recipients of new homes can be persuaded to vote for President Aliyev.

“We’re prepared to vote for the current leadership anyway; they don’t need to go out of their way to persuade us;” resident Gunay Yusifova said. “But surely they realise people can’t go on living in conditions like these for much longer. The election isn’t till October, but autumn and heavy rains begin after August 15 round here. There will inevitably be casualties.”

She added, “We’ve decided that if they don’t move us in this month, we’ll hold a demonstration outside the president’s offices.”

Mehman Aliyev, whose NGO Kura monitors government spending on rebuilding after devastating floods in central Azerbaijan in 2010, said the tactic was a familiar one.

“The authorities often engage in this kind of thing to win people’s votes,” he said.

Zahir Mammadov, who heads the local branch of the Popular Front, a leading opposition party in Azerbaijan, also believes the delay to opening the new settlement is an election ploy.

Even now, he said, staff at state institutions all over Shamakhi, from local government to schools and hospitals, were being corralled into pro-Aliyev campaigning. He said they were summoned to official meetings where they were told to “keep an eye on neighbours who supported the opposition and report anyone visiting them from outside the district”.

“The district authorities are using every tool they have to secure votes,” Mammadov added.

Similar stories are being heard in other areas. To the south of Shamakhi, in the Sabirabad district, eight villages have been more or less cut off from their local market town since a bridge was closed for repairs a month ago.

Villager Gasimali Safarov is among those who fear the link will not be restored until election time.

“The main bridge… is quite new. It only started operating a year-and-a-half ago. And they aren’t doing any repairs, just cleaning it, giving it a lick of paint and that kind of thing,” he complained. “Now they’re waiting for the president to come and open it. If that’s dragged out until the election, what are people supposed to do all that time?

The alternative route to bring farm produce is more circuitous and involves a toll bridge.

“They’ll give folk the nudge that the president is looking after people and opening a bridge, so they should vote for him,” Safarov said.

When IWPR contacted Sabirabad’s local government about the matter, an official insisted the bridge really was being repaired and would be reopened the moment the work was completed.

In the capital Baku, meanwhile, a kindergarten refurbished last December remains closed because the president has not found time to come and open it.

Sevda Asadova, the mother of a three-year-old, said projected opening dates at New Year and then in January, May and June had come and gone.

“The president never came, so the kindergarten remains closed even though it’s ready for use,” she said. “By the end of August I was sick of waiting so I found another kindergarten for my little girl. I doubt this one will open before campaigning starts.”

Samira Ahmedbeyli is an IWPR reporter in Azerbaijan.

Azerbaijan
Connect with us