Concern at trend towards assigning lawyers to represent victims rather than letting them choose their own.

Concern at trend towards assigning lawyers to represent victims rather than letting them choose their own. 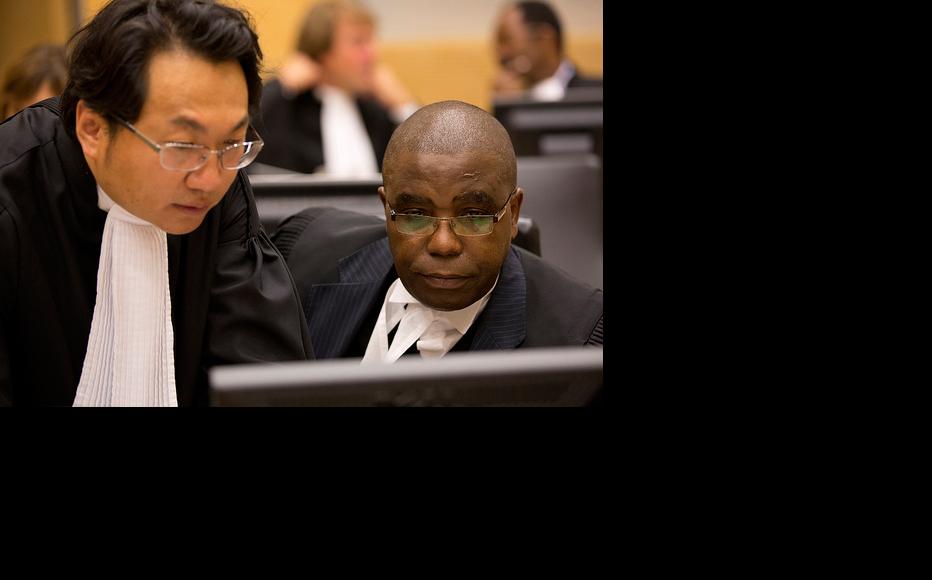 Wilfred Nderitu (right) was appointed to represent victims in the case against Kenya's deputy president, William Ruto, and former broadcaster, Joshua Arap Sang. (Photo: ICC-CPI/Flickr)
The link has been copied

When the International Criminal Court (ICC) prosecutes people suspected of committing grave crimes, the adversarial format is familiar – prosecution pitted against defence, each with its own witnesses. What sets this court in The Hague apart from others is that the victims of crimes in each case are accorded their own, quite separate role in proceedings.

Now there are fears that they are being sidelined from the judicial process. Lawyers who have represented victims at the ICC warn that their special role is being eroded, with a series of decisions in which the job of protecting their interests has been assigned to ICC in-house lawyers rather than counsel of their own choice.

The ICC’s founding agreement, the Rome Statute, gives victims a voice at the court, which can be either in person or, more commonly, through a legal representative. The definition of “victim” is specific. To be deemed a victim, an individual must have suffered harm as a direct consequence of the specific crimes with which suspects are charged, and not, for example, as a result of the general conflict in which crimes were committed.

Victims' legal representatives are entitled to attend and participate in hearings, and are permitted to make both oral representations and written submissions. With the authorisation of the judges, they may also question witnesses and the defendant.

Those who are in favour of victim representation say that this form of legal representation affords them greater recognition of the harm that they have suffered, and helps with the healing process by showing that their concerns are being listened to.

Critics of the process counter that victim participation slows the legal process down and can interfere with the prosecutorial strategy, by introducing questions or issues that have not been raised by the other parties to the case.

If the trial ends in a conviction, victims can apply for reparations from the court.

If victims want the ICC to provide them with a lawyer to protect their interests, there is a dedicated department for that purpose, the Office of Public Counsel for Victims (OPCV).

In practice, though, victims – acting individually or as a group – have mostly opted to pick their own external, independent lawyers.

That freedom of choice seems to be diminishing, though, and some lawyers have highlighted what they see as a worrying trend towards the OPCV taking the lead role in victim representation.

In December 2013, judge Ekaterina Trendafilova prevented victims from seeking their own legal representation in the case against former Congolese rebel Bosco Ntaganda, and instead appointed two lawyers from the OPCV as common legal representatives to act for two separate groups of victims.

Some of the victims had requested representation by six independent lawyers, but Judge Trendafilova ruled this out because of the costs to the court’s legal aid scheme.

A similar decision had been issued previously in the case against former Ivory Coast president Laurent Gbagbo. In that decision, taken June 2012, judge Silvia Fernández instructed the OPCV to provide lead counsel in the case, since this was "the most appropriate and cost-effective system" at that stage. The judge indicated that this system could be revisited later "in light of the views expressed by victims", but the situation remains unchanged.

In the ICC cases against Kenyan president Uhuru Kenyatta and deputy president William Ruto, judges selected external lawyers to represent victims – one for each of the two cases – while indicating that the OPCV would represent victims' interests in court in situations where the common legal representative could not be present.

By the time this decision was made, victims in the Ruto and Kenyatta cases had already organised themselves into groups and chosen their own lawyers, who had to make way for the newly-appointed representatives.

Some lawyers argue that having judges simply appoint counsel to act for victims goes against ICC rules which state that victims are “free to choose a legal representative”.

Paolina Massidda, principal counsel with the OPCV, defends its approach to victim representation. She and others at the ICC maintain that having the OPCV as the centralised system for coordinating victims representation makes sense, since its lawyers are based in The Hague and able to attend all sessions.

One of the practical reasons for using in-house lawyers is money.

Luc Walleyn is an outside lawyer who represents victims in the case against convicted Congolese warlord Thomas Lubanga Dyilo. He says the trend has emerged due to the limits placed on the court’s spending by the 122 governments that fund it.

“From the state parties there is clearly a pressure to internalise the legal representation for financial reasons,” he said.

Fergal Gaynor, the external lawyer whom the OPCV appointed to represent more than 600 victims in the Kenyatta case, highlighted the shortage of funds allocated to victim representation, which is a time- and labour-intensive process given the numbers involved.

“The main problem is that there are a very large number of victims to be consulted, and the resources which are made available by the court to the victims’ legal representative to do so are very modest,” he said.

Some lawyers worry that victims are no longer the focus of the ICC that they once were.

Liesbeth Zegveld, who worked with a group of victims in the Ruto and Sang case until she was forced to stand aside in order to let a court-appointed representative take over, thinks the ICC regards victim representation more as a nuisance than as an asset in legal proceedings.

"The ICC seemed to regard victims [gradually] as a bit of a problem, in terms of the time that they consume and the difficulties they present at various stages of the legal proceedings," she said. "The court obviously preferred to focus on the accused or other issues that were important to its survival and reputation, rather than spend too much time on the victims."

Zegveld says that this goes against one of the founding concepts of the ICC, which is that victims should be at the very heart of justice.

"We had been working for these victims for years and we were trusted by the local communities, so it was amazing that the ICC chose to appoint someone new," said Zegveld. "It upset me that they seem to be undermining the very idea of independent representation. Victims are supposed to be at the forefront of the whole concept of the ICC."

Other lawyers agree that restricting victims’ choices in this manner could undermine the quality of the legal representation they receive.

Raymond Brown, who represents victims from Darfur in the case against Sudanese president Omar al-Bashir, argues that with a trend towards assigning victim representation to the OPCV rather than allowing people to choose, “The effect is to make victims less visible and less dynamic in the victim participation process.”

Walleyn argues that if the OPCV becomes the sole source of victim representation, this must reduce competition.

“It is like if you would have a law firm which has the monopoly of all defence [work],” Walleyn said. “Of course there will formally be a defence, but it is not the same.”

Massidda says that there is no danger of the OPCV becoming sole representative of victims. Instead, she foresees a system in which the OPCV takes the lead role in the process, since it is based in The Hague, but works closely with external lawyers in the field. This is working well in the Ntaganda and Gbagbo cases, she says.

Nonetheless, many lawyers see the general trend as a matter of concern, arguing that granting the ICC too much control could result in conflicts of interest.

In the Kenyatta and Ruto cases, the victims represent two opposing sides in the post-election violence of 2007-08. Walleyn thinks it would not be a good idea for the same office to represent the interests of both groups.

Massidda defends the OPCV's approach and argues that it is capable of acting on behalf of different groups with opposing legal interests.

She pointed out that when her office was asked to provide lawyers to support the leading counsels in the two Kenyan cases, she informed judges that in order to prevent any perception of conflict of interest, the cases would be handled by completely separate teams, sitting in different offices.

“We have an obligation as lawyers, under the code of professional conduct, to verify whether or not there is any conflict of interest,” she told IWPR.

However, a lawyer with extensive experience of how the OPCV works, who spoke to IWPR on condition of anonymity, said that in practice, it was very difficult to keep cases separate within the office.

"Basically anyone at the OPCV can have access to any of the evidence or any of the elements gathered by any of the two teams," he said. "They represent completely opposite interests but have exactly the same access to the same documents."

There is also the bigger question of how objective a court-appointed lawyer can be.

Sureta Chana, an international lawyer who represented victims in the Ruto and Sang case, is against the OPCV being assigned to provide lead counsel for victims. She argues that independent lawyers take a broader view and are more able to ask awkward questions.

Chana said some of the submissions she made on behalf of victims were seen as a “nuisance”, for example when she questioned the prosecution’s investigative methods in Kenya.

“This is the not the kind of argument that the OPCV would ever come up with,” she said, adding that she believed the court wanted to appoint its own lawyers to “neutralise” victims’ concerns.

Massidda denied that the OPCV would fail to articulate victims’ concerns to the court or provide less robust representation than an external lawyer would.

“It has to be very clear that when we act as counsel, we are completely independent,” she told IWPR. “Nobody except the victims can question what we do in the courtroom, and I can assure you that it’s really like this. Victims can always say, ‘I don’t like my lawyer, I want someone else’.”

Besides questions about how best to serve victims’ interests, turning victim representation into just another function of the court carries other, less tangible risks. Brown argues that it removes a channel through which the ICC can engage with the wider world.

At a time when the court was seeking to establish itself as a force for good and work with supporters in a range of countries, reducing the involvement of external lawyers was “an opportunity lost”, he said.

“The proper use and engagement of external counsel was a way for the ICC to engage with the human rights community across the globe,” Brown said. “To the extent that the role of counsel is broadly diminished, the court is injuring itself.”

Blake Evans-Pritchard is an IWPR contributor in The Hague. Joyce Wangui is an IWPR trained reporter in Nairobi. Simon Jennings is IWPR’s Africa Editor.