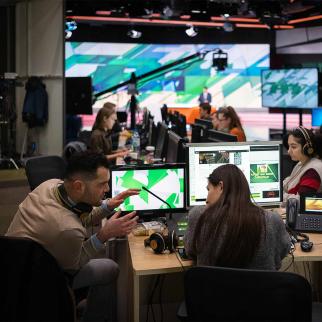 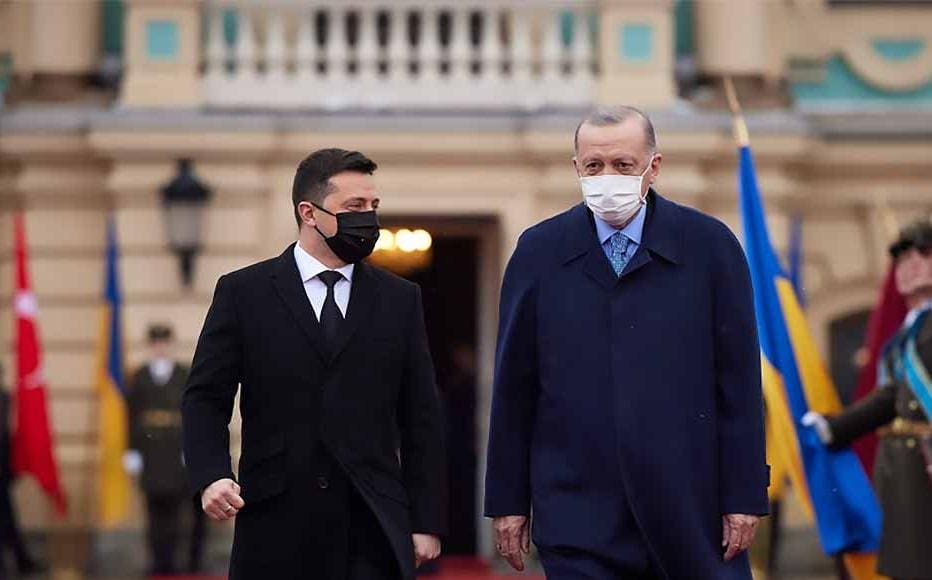 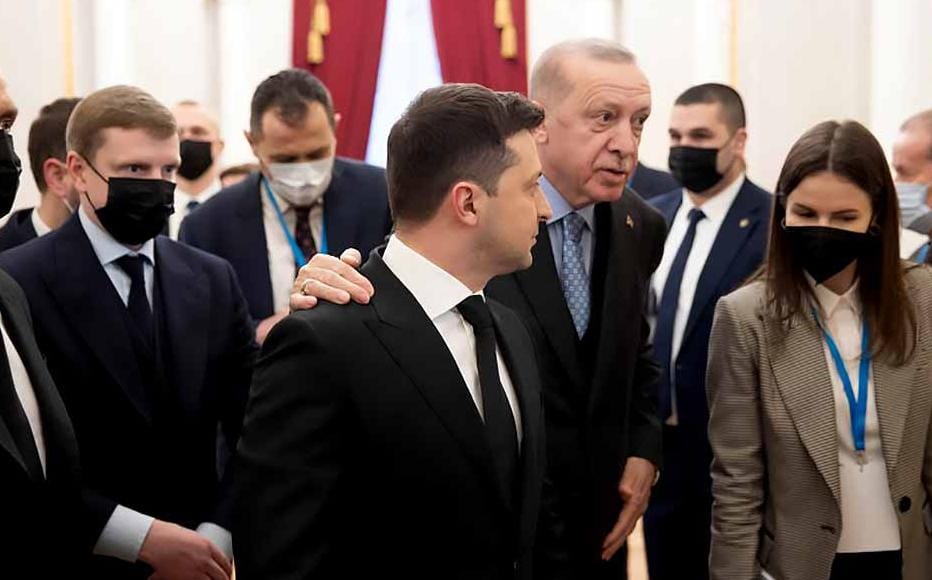 Turkey's President Erdogan visited Ukraine on February 3, 2022. © Press Service of the Ukrainian President
The link has been copied

The ever-closer strategic relationship between Turkey and Ukraine was highlighted by key economic and defence agreements signed earlier this month. But this is unlikely to translate into a seat for Ankara at any future talks between Moscow and Kyiv, according to analysts.

Turkish president Recep Tayyip Erdogan signed a number of key agreements after arriving in Kyiv on February 3, including an free trade deal under discussion for some 15 years. Security agreements also included a crucial deal to build a plant in Ukraine for the production of Bayraktar military drones, which will be equipped with engines made in Ukraine.

However, Erdogan’s proposal to mediate a summit in Turkey “at the level of leaders or talks at the technical level” was the most discussed aspect of the trip.

“We will decide on the date now,” the state-run Anadolu news agency quoted Erdogan as saying. “We want to hold this meeting in order to bring Mr Putin and Mr. Zelensky together at a high level. This comes from our agreement with Mr Zelensky. I believe that this will enable a new format.”

Analysts note that Erdogan has good reason to seek the status of an intermediary in resolving the current crisis.

“In recent years, Turkey’s relations with many neighbours have deteriorated,” said Yevgenia Gaber, a senior fellow at the Centre in Modern Turkish Studies at Carleton University. “But now there is an understanding that in order to implement ambitious initiatives, Turkey needs, if not friendly, then at least normal working relations with neighbouring countries. The most complicated are the relations with the EU and they have considerably worsened in recent years. However, if Ankara manages to contribute to the resolution of the crisis around Ukraine, which worries the EU very much, this should significantly improve their relations.”

Yet the fact remains that no meeting has yet been set - and the prospect remains unlikely.

Russia’s response to the initiative was neutral, with Putin’s spokesman Dmitry Peskov telling reporters that “the president said that he was ready to meet with anyone, if necessary, but this requires an understanding of what will be the outcome, what will be discussed. There is no such understanding yet”.

Kyiv has also not confirmed the possibility of such a meeting, similarly repeating that Zelensky’s position was that he was ready to meet Putin as part of any platform.

Maria Zolkina, an analyst at the Ilko Kucheriv Democratic Initiatives Foundation, is doubtful that such a meeting would be in Russia’s interests.

“Recently, the Russian Federation has toughened its stance and has refused to negotiate with Ukraine, which is considered a client of the US and not recognised as an equal partner for dialogue,” she said. “Moreover, any new format is an opportunity to offer new proposals and thereby move the negotiation process forward. Therefore, theoretically, Kyiv needs such a format, and not Moscow, which rejects all compromises and insists on Kyiv’s implementation of the Minsk agreements in the most unfavourable version for itself.”

The Ukrainian caution is also understandable, as the opposition- especially the party of former president Petro Poroshenko - strongly opposes talks without the participation of Western allies as within the Normandy format, where France and Germany serve as mediators.

“The main risk for Ukraine is the candidacy of a mediator,” Zolkina said. “Yes, relations between Ukraine and Turkey have significantly improved in recent years, but it cannot be ruled out that this will change and it will be more profitable for Erdogan to play along with the Russian Federation. Unlike Western countries, the position of Turkey does not depend on international law, which is on our side, and the authoritarian nature of the authorities makes any development possible.”

Mikhail Gonchar, the president of the Centre for Global Studies Strategy XXI, was even more critical.

“Relations between Erdogan and Putin resemble a swing – from a sharp cooling-off in relations and mutual threats to a new warming and rapprochement. The key to new rapprochements is the high volume of bilateral trade, which many times exceeds the trade volume with Ukraine. In such a situation, dependence on Erdogan can have extremely dire consequences for Ukraine,” he said.

One aspect of Erdogan’s proposal– for Turkey to serve as the host for fresh technical talks over the situation in the Donbas – has more chance of success. While the Minsk agreements, signed in the Belarussian capital in 2014 and 2015, are the recognised basis for future resolution of the conflict, Ukraine’s relations with Belarus have since deteriorated sharply. Most recently, this month Belarus deployed troops to the Ukrainian border for war games with Russia.

“Obviously, we will not return to Minsk again,” a senior Ukrainian government source told IWPR on condition of confidentiality. “In such circumstances, Turkey’s proposal is quite acceptable for us. Another thing is that we do not hurry to return these negotiations offline. As recent years have shown, we can successfully conduct these talks online and most likely will do so until the end of the pandemic.”

Indeed, a new location for these talks carries few risks for Ukraine.

“The probability that the owner of the place will influence the course of negotiations is minimal,” Zolkina said. “In fact, he is only responsible for the logistics. For instance, Lukashenko did not manage to get any personal benefits from the status of a negotiating platform, except for the temporary improvement in relations with the EU.”

She said that there were various reasons why holding such talks in Turkey could be more beneficial for Ukraine than in Helsinki or Vienna, which were also proposed as replacements for Minsk.

“There are a lot of people involved in these negotiations who are sanctioned by the EU,” she continued. “And now, for each round of negotiations, these sanctions will have to be temporarily lifted, which discredits the idea of personal sanctions. There are no such risks in the case of Turkey, since it did not impose any sanctions. Besides, by agreeing to Erdogan’s proposal, we are doing him a favour, which can further improve relations with Turkey.”

Gaber said that such technical talks in Turkey could also include other topics.

“Turkey is helping the Crimean Tatars,” she explained. “It is possible that the status of an intermediary will allow Erdogan to raise the issue with the Russian Federation about releasing Crimean political prisoners, among whom many are Crimean Tatars.”