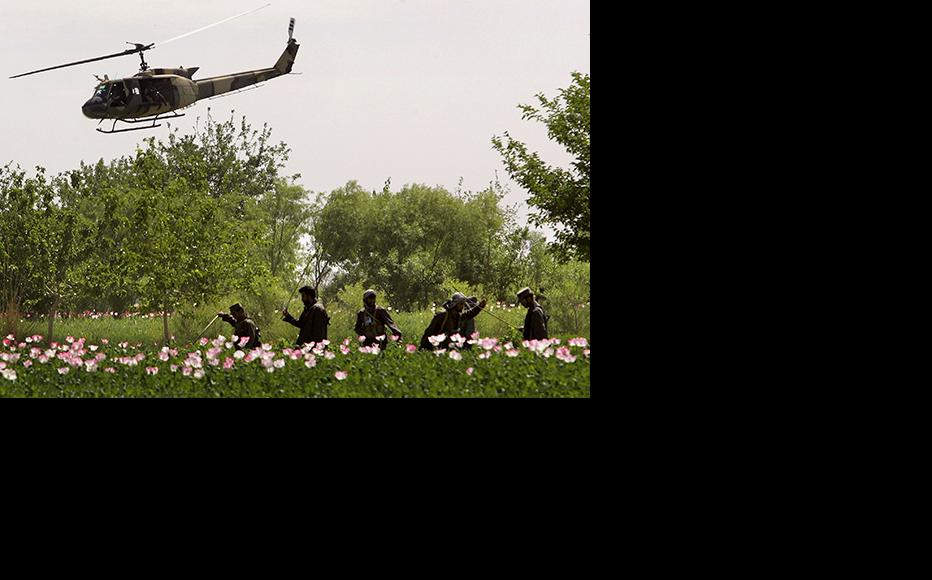 The new campaign is the latest in a series of joint US-Afghan counter-narcotics operations in Helmand. (Photo: John Moore/Getty Images)
The link has been copied

Afghan military officials have praised a new anti-Taleban air campaign run jointly with US forces in Helmand, despite fears from locals that the operation may prove counter-productive.

The airstrikes in the southern province began in late November, with the stated aim of interrupting the insurgent group’s income from drug production.

Brigadier General Lance Bunch of the US Air Force told Ariana News that initial strikes across the districts of Musa Qala, Zamindawar and Dishu had proved successful.

“Using air power, we have been able to target the Taleban in their so-called safe zones, command-and-control nodes, illicit revenue-generating ventures, and their logistical networks,” Brunch said.

He said that 25 processing laboratories valued at around 80 million US dollars had been destroyed, while two tonnes of heroin and nearly five-and-a-half tonnes of opium had been seized in raids by ground units.

According to the UN, estimated annual opium production in Afghanistan reached a record high of some 9,000 metric tonnes in 2017.

UN officials, warning that the government’s weakening grip on security in Helmand was hampering counter-narcotic efforts, noted that opium production had risen by 87 per cent from 2016.

Insurgent groups also generate revenue though taxing local populations in areas they control. The tax, known as ushur, is often charged on proceeds from farming as well as illegal mining.

Sardar Mohammad Hamdard, the deputy governor of Helmand, said that reducing the Taleban’s ability to raise money would inevitably weaken their fighting strength.

He said, “For the first time in 15 years some of the major processing centers have been targeted by airstrikes. Such attacks will have a positive impact.”

Wali Mohammad Ahmadzai, commander of the 215th Maiwand Corps in Helmand, promised that the focus on drug factory sites would continue.

“Going forward, we will continue to target and destroy insurgent sanctuaries and narcotic producing centres through airstrikes,” he said. “We won’t stop until the financial resources available to the Taleban are finished.”

“There’s no doubt that the Taleban have been significantly weakened by our targeting of drug processing factories and smuggling centres,” he said. “The poppy is the Taleban’s most important financial resource and if their factories are destroyed, war will not continue.”

Sayed Ahmad Wror, Helmand’s director of counter-narcotics, agreed that stamping down on drug production was a key factor in any campaign against the Taleban.

“With luck those farmers who are growing poppy will soon realise the Taleban can no longer pay and process the drug and so they’ll cease cultivating it,” he said.

“Drug traffickers have kept the cycle of war going in Helmand only to allow them to pursue their own interests.”

Other local officials, however, were less confident of the success of the airstrikes.

“The majority of people here in the province are farmers. There are no other opportunities for work for the young and so, inevitably, they grow poppy to ensure they have a sustainable income,” he said.

“The problems of those living in Helmand have been ignored by the government and this must change.”

He said, “We’ve experience seeing these bombardments and we know that Afghan and international forces make mistakes and cause civilian casualties.

“Then they come to ask for our forgiveness, but this is not right.”

Omar Zwak, spokesmen for the governor of Helmand, said that great efforts were being made to avoid harming civilians during the airstrikes.

“Generally it’s the insurgents who spread rumours of civilian deaths in an effort to spread division between the people and our government,” he continued.

For their part, the Taleban denied that they were in any way responsible for growing or trafficking drugs.

Taleban spokesman Qari Yousef Ahmadi claimed that it was in fact corrupt government ministers who were profiting from opium cultivation, and pointed out that growing poppy had been banned under Taleban rule pre-2001.

He said, “The people who benefit from drug trafficking are those who smuggle large quantities of opium and heroin out of Afghanistan abroad.

“These are not our people. They are high-ranking government officials who sell to the world markets.”

But a number of farmers in Helmand interviewed by IWPR confirmed that the Taleban were involved in drug processing and smuggling.

One, who asked not to be named, said, “I know the Taleban receives money from poppy farming because during harvesting they are the ones requesting specific quantities of the drug.”

He added, “Right now all my six sons are unemployed. There’s no other work here so of course they grow poppy.”

Zain-ul-Abidin Jalal, a political analyst in the province, also argued that a long-term solution to poppy cultivation would remain out of reach until the government found other equally profitable means of employment.

“If the main revenue of armed insurgents groups is poppy production and its processing then, yes, the factories must be destroyed,” he said.

“But if these groups are also able to raise money from other means then hitting a few factories will have little impact long-term. It may just become a wasted effort.”