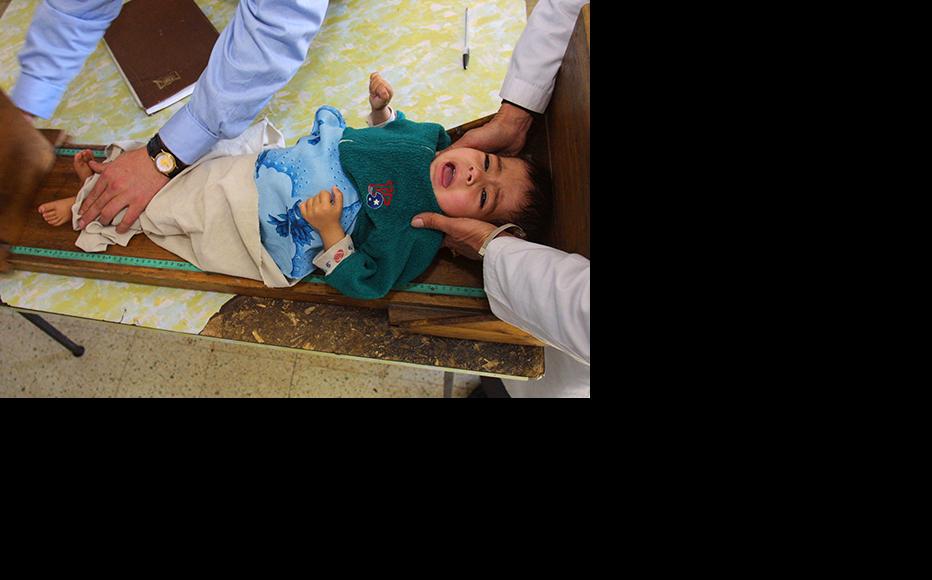 A malnurished baby is measured to monitor her growth at a hospital in Kabul. (Photo: Paula Bronstein/Getty Images)
The link has been copied

Rising numbers of children in the southern Afghan province of Kandahar are suffering from malnutrition, according to local health officials, with more than 36,000 in need of assistance.

Faizi explained that this indicated a rise of nearly 4,000 children from two years ago. The true number was likely to be even higher, he continued, noting that his figures only accounted for those children whose parents were able to seek treatment at public health centres.

Malnutrition is a countrywide problem in Afghanistan. A recent UN report found that 1.8 million people need assistance for the condition, including at least 1.3 million children under the age of five.

However, across the country, only around 250,000 children had been admitted for treatment as of September 2016.

Malnutrition amongst children leads to both short and long term irreversible health problems. Growth may be stunted and cognitive development harmed, and lowered resistance means that children are more vulnerable to disease.

Nearly 70 children were known to have died in Kandahar as a result of malnutrition last year, Faizi said.

Child malnutrition was a problem in a number of areas in Kandahar city and the centres of the province’s 17 districts including Maiwand, Panjwai and Zhari, he continued.

“The reason that more children in some areas of Kandahar city are malnourished is because many families have been displaced and fled from Zabul, Uruzgan and Helmand provinces, and moved to Kandahar city where now they are living in poor conditions,” Faizi said.

The real crisis, however, lay in more remote areas where security was very poor and there were soaring levels of unemployment.

The situation had been made worse by increased fighting, an economic slowdown since most coalition forces left in 2014 and a sharp rise in the number of returnees from Pakistan.

Across the country, both floods and drought have hit local agriculture hard, while locust infestation and crop diseases have also taken their toll.

Some mothers told IWPR that they were just too poor to be able to feed their children properly.

“My six-month-old son suffers from this condition,” said Raxia, who had travelled from her home in the village of Waish village of Spin Boldak district. “He was losing weight and seemed weaker day by day…there’s no clinic in our village and our family has not been able to feed him enough milk. He spent a week in bed and finally I had to bring him here.”

Guldasta, from Talokan village in Panjwai district, added, “My son has been malnourished and too thin ever since he was born, his situation is getting worse day by day. Now I’ve brought him here, please God he will be treated.”

Bibi Amina, from Sangisar village in Zhari district, said she had been there for more than two weeks with her young son, having been unable to access treatment closer to home.

“We took our kid to a clinic in our village but they told me there was no treatment and I should take him to Mirwais hospital. Eventually we brought my kid here and now his health situation appears somewhat better.”

According to the UN, only 60 per cent of Afghans have any access to healthcare, with provision being weakest in more remote parts of the country. Of the health facilities that are available, only 54 per cent provide any form of nutrition services.

Kandahar officials say that they are attempted to boost the availability of help for with malnutrition.

“Previously we didn’t have much space or many beds to admit children, but this year we’ve increased the number of beds from 90 to 120 and can now treat more patients simultaneously,” said Muhammad Siddiq, head of the Mirwais children’s department.

The Kandahar health department has also set up 48 static and 38 mobile centres in Kandahar city and the districts to combat child malnutrition.

Faizi said that it was vital for parents to seek help if they were concerned about their children, adding, “I call on families not to keep patients at home but instead take them immediately to healthcare centres.”

He explained that all cases of malnutrition were referred to local clinics, where each malnourished child was monitored and checked weekly for a four-month period to chart their condition.

These clinics provide two types of supplemental feeding, both of them for free. Ready-to-use therapeutic foods (RUTF) are high-energy products provided by UNICEF that deliver around 550 calories per 100 grammes, and are used to treat severe acute malnutrition.

Ready-to-use complimentary foods (RUCF) are distributed via the World Food Programme and are intended to treat moderate malnutrition.

Siddiq emphasised that a long-term strategy was crucial to dealing with child malnutrition. While he agreed that that the lack of security and widespread poverty was exacerbating the problem, raising public awareness was also vital.

“Currently, in addition to our health services, we also provide information on how to prevent malnutrition, and we hope that if families put our advice into practice It will benefit them greatly,” Siddiq concluded.

Shamsuddin Tanvir, head of the children’s department at the Kandahar office of the Afghanistan Independent Human Rights Commission (AIHRC), also said that addressing malnutrition needed to be part of a more wide-reaching strategy.

Without better security and economic development, particularly in the districts, malnutrition would spiral out of control, he continued. Local health professionals had already warned the AIHRC about an impending “humanitarian disaster” if child nutrition was not improved.

“This is a concern for our office,” Tanvir said. “We want the local authorities and the government to improve security, prevent migration and displacement and create jobs in order to empower people and improve their financial situation, so that they will be able to buy proper food and prevent their families from becoming malnourished.”

Others argue that if security was improved in more volatile parts of Afghanistan, people displaced to Kandahar could return home and contribute to agricultural production.

Kandahar activist Haji Faiz Mohammad said that local resources had been put under immense pressure due to the burden of caring for people displaced from the districts and neighbouring provinces.

“Unemployment is the source of all misery,” he said, arguing that the government needed to prioritise a local job creation scheme.

“If we want to get rid of social problems, we need to address people’s fundamental needs, and that’s providing work which allows people to become self-reliant.”