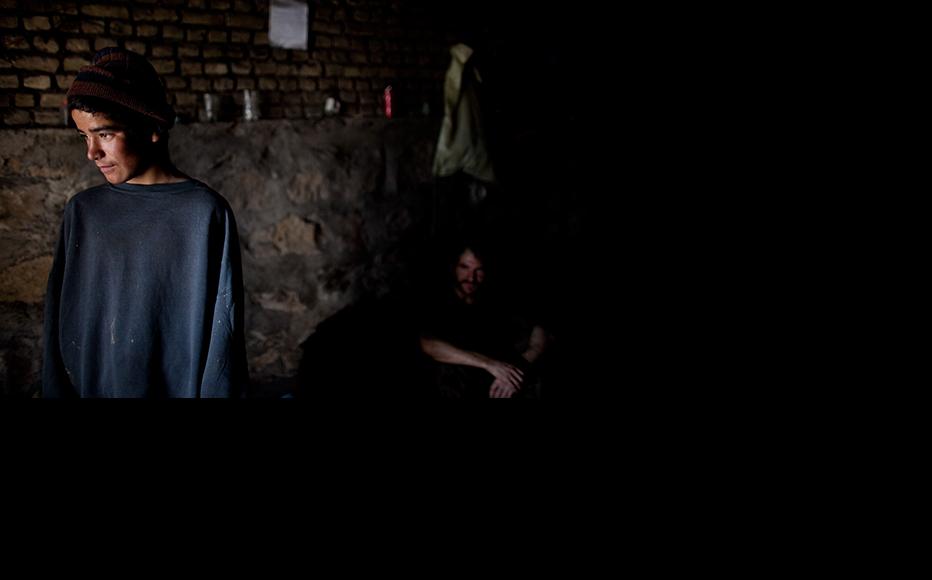 Child labourer in a coal mine in western Afghanistan. (Photo: Majid Saeedi/Getty Images)
The link has been copied

Shir Ahmad, 12, spends all day working in the pitch darkness of a coalmine in the Dara-e Suf district of northern Samangan province.

His face black with dust, he said he spent his time loading a donkey with coal to then transport to the surface.

The work was dangerous, Ahmad explained, continuing, "Once a big piece of coal fell on my head and I was in bed for ten days."

But the money was good - 400 afghanis (six US dollars) a day, well above the average wage in Afghanistan.

Leading three donkeys out of the mine, Najibullah, a 13-year-old from Tor village in Dara-e Suf, also said that he needed the wages to support his family.

"I was in fifth grade at school when my father died. I had to drop out of school and work in the mine," he said, adding, “I wake up at one o'clock in the morning and remain inside the mine until 2pm the next day so as to fill two lorries full of coal."

Child labour is rife in the more than 500 coalmines spread across the Dara-e Suf district of Samangan province, one of Afghanistan’s largest seams.

According to Khair Mohammad Akhtarzada, the deputy governor of Samangan, more than 1,000 of some 5,000 people working in these mines are underage.

He said that the government only controlled four out of the hundreds of mines currently operational in the region. The others were unlicensed and did not maintain even minimal safety standards. This meant that accidents were common and often fatal.

Akhtarzada said that his office had written hundreds of letters to the ministry of mines and industries on the subject, but no action had been taken. He said that he understood that the scale of the problem was beyond the government’s capacity to deal with.

"There are over 560 coal mines in Dara-e Suf district,” he said. “The government cannot place a guard in front of every mine to prevent employers recruiting children."

Akhtarzada said that the ministry had promised to approve a 200-member security force to monitor the mines in Dara-e Suf, but had apparently not yet been able to reach an agreement over the issue with the ministry of interior.

Ahmad Ali Hassani, the governor of Dara-e Suf Bala - the district’s upper valley - called for the ministry of mines to dispatch mobile teams to halt work at pits deemed too dangerous to function as well as preventing child labour.

But he agreed that government lacked the resources to monitor such a large number of collieries.

"The mines are spread across an extensive area. There are limited numbers of employees from the ministry of mines to regulate them. So if workers are killed in the mines, the owner asks the family to stay silent and not inform anyone officially by paying them some money."

Hassani said that the ministry had only two offices, in the coal-rich areas of Shab Bashak and Sheikha, but claimed that neither outpost was functioning.

Hassan Kargar, the chairman of the labour union of the northern provinces, based in Mazar-e Sharif, said that Afghan law clearly precluded the use of children or even young teenagers for hard physical tasks.

"According to article 13 of the labour law, those who perform heavy labour should be aged at least age 18,” he said, adding that the mine owners were enacting “a form of violence against children which the Afghan government must act to prevent".

Kargar said that he had a letter from the ministry of labour, social affairs, martyrs and the disabled dating from 2014 that confirmed it was illegal to employ children in heavy labour and which had been sent to mine owners. However, there had been no further attempts to hold them to account.

Qazi Sayyid Mohammad Samay, head of the Afghanistan Independent Human Rights' Commission (AIHRC) in the northern province of Balkh, said, "The use of children in heavy or forced labour is against all accepted conventions on children’s rights and amount to a form of violence against children."

He said that as a signatory to the international convention on children’s rights, Afghanistan should keep to its commitments.

The convention states that members “shall defend the rights of abused children and shall prevent any work that is heavy and/or prevents children from education or causes harm to their physical, mental, spiritual, moral, and social growth".

Ministry of mining spokesman Zabihullah Sarwari agreed that child labour was against the law and acknowledged that a number of mines were operating illegally in Samangan province. However, he said that there was nothing his ministry could do. They were limited to making policy, he explained.

Sarwari added that his department had written to the ministry of the interior a number of times asking them to act over illegal extraction, but no action had been taken.

“We are now working on a strategy to bring the mines out of control of abusive owners,” he said.

Najibullah Danish, the deputy spokesman of the ministry of interior, confirmed that the police were considering developing a plan to increase government scrutiny of the mines, but gave no details as to when this might be ready.

Faiz Mohammad, 50, works alongside his 15-year-old son in a Dara-e Suf coalmine.

He said that each day they walked up to 300 metres inside the mine to dig, with no safety equipment beyond a small headlamp.

"There are eight children working alongside my son,” he told IWPR. “Each of them uses two donkeys to take coal out of the mine."

Under these circumstances, mishaps are common, and many locals say that they have lost family members to workplace accidents.

Sayyid Ghulam Hussein, 25, who works at the Shab Bashak mine, said: "My 12-year-old brother was killed due to gas inside the tunnel a month ago."

He continued, "I went to the Dara-e Suf market to buy groceries one day. When I returned, I noticed that people had gathered near our house and my brother was lying on the ground unconscious.”

The family tried desperately to find oxygen equipment to revive the boy, but in vain.

“Finally, we found a car and took my brother towards the hospital in Dara-e Suf. The hospital is one-and-a-half hours away from our village. My brother lost his life on the way."

Ghafoor, 45, another worker at the Shab Bashak mine, also lost a younger sibling in a pit accident.

"My brother was 13 years old. He would go to work on his donkey and return home [to their nearby village] every day. One day, it was around noon when someone called my name and asked me to go to the mine. I ran. I saw that they had taken my brother out of the mine, but he was no longer alive. He had already died inside the mine."

Ghafoor said that his brother had been found 200 metres inside the mine and it was thought that gas had killed him.

Sometimes, tunnels simply collapse on the workers inside.

"There were two sons from a family from Qaram Qul village who worked in one mine a year-and-a-half ago,” said Hajji Saifuddin, 75. “The entrance to the mine collapsed. Both boys, 14 and 15 years of age, were buried under piles of coal and died."

Saifuddin, a resident of Dara-e Suf’s Sheikh village, said he had spent decades working in the coal mines.

"Based on my experience, around 100 people are killed each year inside the tunnels when parts of the mine collapses, big chunks of coal are displaced, or when the tunnel ceiling caves in," he said, adding that injuries were also common.

"There are many wounded people,” he continued. “One or two people are sent home with broken arms or legs each week."

Saifuddin said that the local environment had also been badly contaminated, adding that countless numbers of people suffered from asthma or allergies in the area.

Medical workers confirm his assessment. Eid Mohammad Ramazani runs a dispensary in the market of Dahana-e Tor in Dara-e Suf district and estimated that 70 per cent of residents of areas around the mine also suffered from asthma and respiratory diseases.

More than 10 people, including children, came to him for treatment each day, he said, adding that he also saw four of five children each month with fractures he believed were sustained in the mines.

Gul Ahmad Quraishi, the director of a 30-bed hospital in the centre of Dara-e Suf district, also said that he believed that the mines had had a devastating impact on the health of local people.

"Over 200 patients visit the centre each day for treatment, most of them from areas near the mines. The majority suffer from respiratory diseases and asthma," Quraishi said, adding that even the water in the canals near the mines was contaminated with coal dust.

Quraishi said that he also regularly treated children with limbs broken from injuries he believed they had sustained in the mines.

IWPR managed to contact one private mine-owner, Amanullah, who runs a pit in Dahan-e Tor.

"Nobody has been killed in my mine, but one or two people get killed or wounded in other mines every two or three months," he said.

Afghanistan
Children
Connect with us