The pandemic has allowed the authorities to further abuse technology and restrict freedom of speech.

The pandemic has allowed the authorities to further abuse technology and restrict freedom of speech. 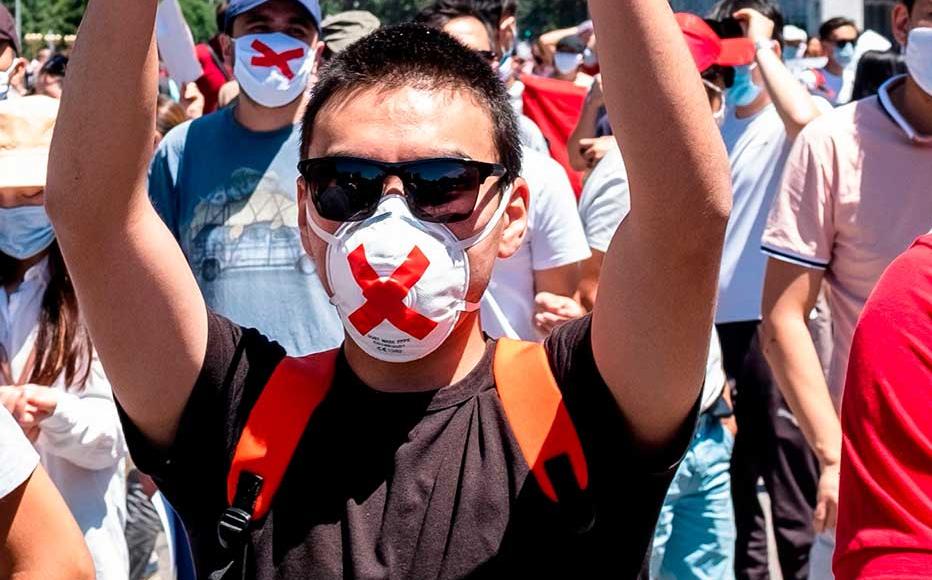 Hundreds of Kyrgyz protest against a draft law they say will hit press and internet freedoms with a man holding up a portrait of MP, the bill initiator Gulshat Asylbayeva, Bishkek, June 29, 2020. © Danil Usmanov/AFP via Getty Images
The link has been copied

The restrictions around coronavirus have made people around the world more reliant on the internet as a means of communication – often involving criticism of how the authorities have handled the crisis. Attempts by governments in Central Asia to suppress such censure have generated even more discontent, highlighting ongoing debates about online expression in the region.

Inga Sikorskaya, a former senior IWPR editor for Uzbekistan and Turkmenistan, now heads the School of Peacemaking and Media Technologies research organisation. She warns that government responses to freedom of speech amid the crisis heralds a worrying trend for future attempts to control online expression.

IWPR: The pandemic and lockdown have made people spend more time online. Based on this, has Covid-19 influenced the level of internet freedom of speech in Central Asia?

Inga Sikorskaya: The period of the pandemic has become one of the gloomiest for freedom of speech in Central Asia. The authorities have responded with strict restrictive measures that suppressed freedom of speech and the press and increased the risks of threats and attacks against journalists and bloggers, especially those who wrote about coronavirus.

On the one hand, we became dependent on digital technologies. On the other, many measures affected internet freedom as it became the main platform for sharing information during social isolation.

The authorities silenced journalists and refused to accredit media outlets when they covered coronavirus during the lockdown. In Kyrgyzstan, in March-April 2020 the authorities forced bloggers to apologise for criticism that the government had responded poorly to the pandemic.

In Uzbekistan in July 2020, a security agency supervisor forced the administrator of the Troll.uz Telegram channel to delete a post about corruption during the pandemic. In another case, unknown people called bloggers and reminded them of their criminal liability for “spreading panic” in posts about coronavirus.

Insults and threats were directed against independent journalists in Tajikistan who reported on Covid-19 when the authorities denied there were any coronavirus cases in the country. A range of independent web resources were blocked and access to information restricted.

What are the dynamics and changes that Covid-19 brought to the sphere of hate speech?

The level of hate speech in the media and on the internet has increased slightly during social isolation because of the increase in comments from people who shifted to the online sphere.

The situation increased the growth of xenophobia and Islamophobia. According to the results of our last survey on the influence of Covid-19 on discrimination, the main targets of hate attacks online in Kyrgyzstan were Muslim pilgrims who returned from hajj just before lockdown. Some users not only accused them of spreading coronavirus, but also urged other people to punish them.

Another target group among hate distributors were ethnic Chinese, the main target of media xenophobia in Kazakstan. In Uzbekistan, there was online hate speech against migrant workers who returned due to the pandemic.

In fact, the dynamics remain the same as in previous years. The only change is in the amount of recorded hate speech against various social groups and the political context that affected narratives of intolerance in the public space.

For example, in Kyrgyzstan – which experienced a disputed parliamentary election, an extraordinary presidential election, a referendum and political shock - hate speech spread on the internet much faster than in quieter neighbouring countries.

How would you evaluate the authorities’ attempts to regulate the internet and make users liable for their actions? How can we solve the problem of malicious behaviour via fake accounts?

Most of the methods that are used to regulate the internet in Central Asia are authoritative and promote censorship. This trend can be seen in other states that experience digital authoritarianism. Instruments are used to strengthen social and political control and to suppress civil liberties. Despite the fact that digital society does suffer from fakes, the implementation of technologies related to online control and regulation requires guaranteed personal data confidentiality and the rule of law. It is difficult to assume that the governments of Central Asian countries will be willing to do this.

Therefore, the problem of fake accounts is best solved by cooperating with technology companies, digital giants such as Facebook, YouTube, Twitter. These companies are already actively involved in this issue, developing new algorithms, rules, promoting openness, transparency and their own regulatory mechanisms [alongside] freedom of expression.

How do government’s restrictions affect the work of journalists, bloggers, activists – all those who use the internet for legitimate and free discussion? How should the media community solve these problems?

Recent trends show a steady decline in internet freedom for several years in a row. There are three main challenges that will further threaten the freedom and development of journalism in Central Asia.

Firstly, this is an increase in the level of online threats, which continue in the offline environment. During the election campaigns of 2020 and 2021 in Kyrgyzstan and Kazakstan, journalists and Internet activists faced an increase in bullying, attacks and seizure of equipment while covering political processes live on the internet.

Therefore, more attention needs to be paid to the digital and physical security of media workers and all fighters for the freedom of expression.

Secondly, there are disinformation campaigns organised on the internet which often aim to entrap the media or active users. This is directly related to a digital tribalism trend. This is when discussion group members or trolls evaluate information not on the basis of compliance with generally accepted standards of evidence or common understanding, but on the basis of whether it supports the values and goals of a given digital tribe and whether this information is confirmed by their leaders.

The third challenge is the continued use of hate speech on social media platforms and under articles by online news agencies. Most of the documented incidents fall under the umbrella of freedom of expression and, if necessary, are regulated by the development of correct polemics, education and social disapproval.

However, there is a danger that the dissemination of hateful content could provoke outbreaks of offline violence against minorities and social groups. Therefore, the media community must act carefully here, with an understanding of the flexible structure of hate speech so as not to cause a baseless attack on freedom of expression.

What other challenges do defenders of online freedom face in Central Asia?

The pandemic has changed not only attitudes but also technologies. Censorship will grow through the expansion of technology and the export of digital authoritarianism in Central Asia's big neighbours, Russia and China. The surveillance and control of internet freedom advocates will grow. This challenge to democratic principles and human rights shows that we are moving in the opposite direction. Only new, alternative strategies can win.

These can be joint programmes of digital companies, media, civil society and governments, which must agree on a basic set of rules and values, taking into account the importance of preserving freedom of expression for the development of an open and inclusive society.