Thousands have left on specially chartered flights or made their own way to the borders.

Thousands have left on specially chartered flights or made their own way to the borders. 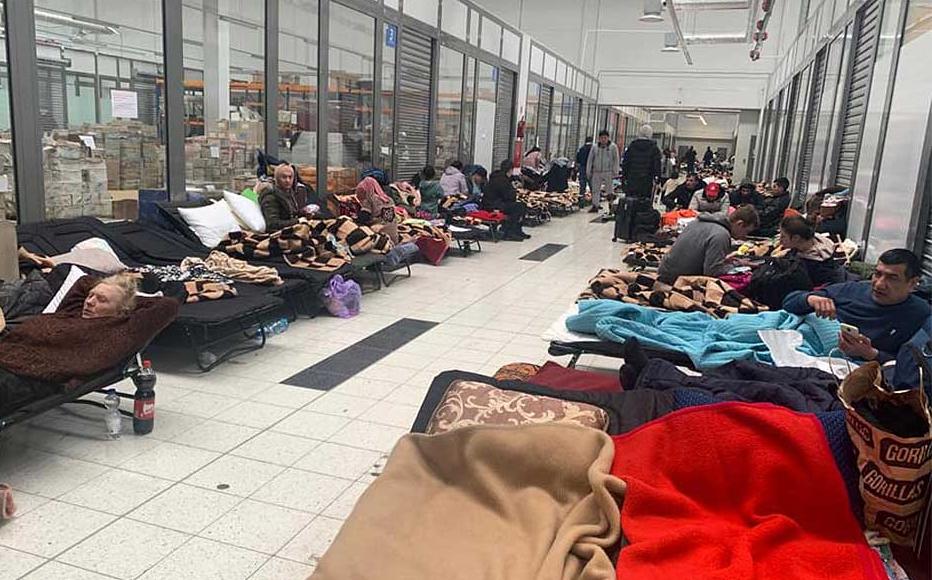 A refugee camp in Poland. © IWPR
The link has been copied

Central Asian states have moved rapidly to evacuate their citizens from Ukraine, with some hastily establishing limited visa-free access to allow them to enter neighbouring European states.

Asem Kalkaman, a Kazak citizen, had travelled to Ukraine to accompany her mother who was undergoing medical treatment.

“A few hours before the attack started, we were walking around Kyiv with friends. And the following morning, we received a lot of missed calls from our relatives who said it was war here. We didn’t believe it, but then we read the news. Afterwards, our relatives advised us to contact the embassy of Kazakstan in Poland and in Ukraine, but their numbers were busy,” Kalkaman said.

Her mother Zhanar Kadyrbekova said that it had been difficult to make their way to the embassy in Kyiv.

“There was no transport, no fuel, yet we managed to find a car. We were also lucky to find a taxi driver who took us to the embassy in Kyiv safe and sound.”

Kazakstan has evacuated more than 400 of its citizens and provided assistance to over 500 who still in Ukraine, with hotlines opened and honorary consuls in Dnipro, Lviv, Odessa and Kharkiv deployed to provide support. Two evacuation flights were arranged from Poland to Almaty and Nur-Sultan

On her return to Nur-Sultan, Kadyrbekova joined fundraising efforts to help newly-returned families.

“A woman with two children who had been living in Ukraine for many years was travelling with us,” she recalled. “Unfortunately, her husband was not let out to Kazakstan on the border because Ukraine does not let their men aged 18 to 65 out due to the military emergency. So, she was left with her children in panic and without money. There were several such families,” she said.

The El Bolashygy civil society group opened a Ukraine, We Are With You initiative which has already raised over 100 million tenge (200,000 dollars) in private donations. Three planes with medicines, food and warm clothes were sent to Ukraine.

According to the ministry of foreign affairs, Kyrgyzstan managed to evacuate around 200 of its citizens from Ukraine to Poland and nearly 100 to Hungary. Around 200 more were evacuated to other destinations, while another 100 remain in Ukraine.

Kyrgyzstan’s ambassador to Ukraine Idris Kadyrkulov said that a “green corridor” had been opened to allow citizens to enter third countries without a visa and PCR test.

He said that the embassy had had to manage some complications such as discovering at the border that some Kyrgyzstanis had overstayed their visas.

“There were also cases when some visas expired a few years ago, but the people did not seem to care about it at all,” he continued.

According to official data provided by the embassy of Tajikistan in Kyiv, nearly 1,300 citizens of have already left Ukraine.

“We were in the bomb shelter for five days,” he recalled. “The city was fired on massively day and night. We made phone calls to our embassy and to the Red Cross, but they told us to stay in the shelter. We had to look for a way out by ourselves. You could travel to Lviv from Kharkiv only by train. It was very difficult to board a train as there were large crowds there. All wanted to leave this nightmare.

“We waited almost for two days at the station,” he continued. “We managed to board the train with difficulty and reached Lviv. It was 100 kilometres more from there to the border of Poland. We drove 20 kilometres by car, and we walked the rest of the distance.”

Tajikistan and Ukraine do not have extensive political relations, but have developed close trade and economic links and have a visa-free regime.

For its part, Uzbekistan has evacuated more than 5,000 citizens since the invasion began on February 24, including a group of 23 Uzbek students taken out of Sumy under the aegis of the International Red Cross. The national air carrier, Uzbekistan Airways, delivered 251 people from Ukraine via Poland on February 28.

There is no official data on the number of citizens of Turkmenistan who have returned from Ukraine.