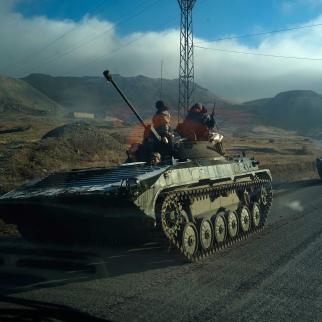 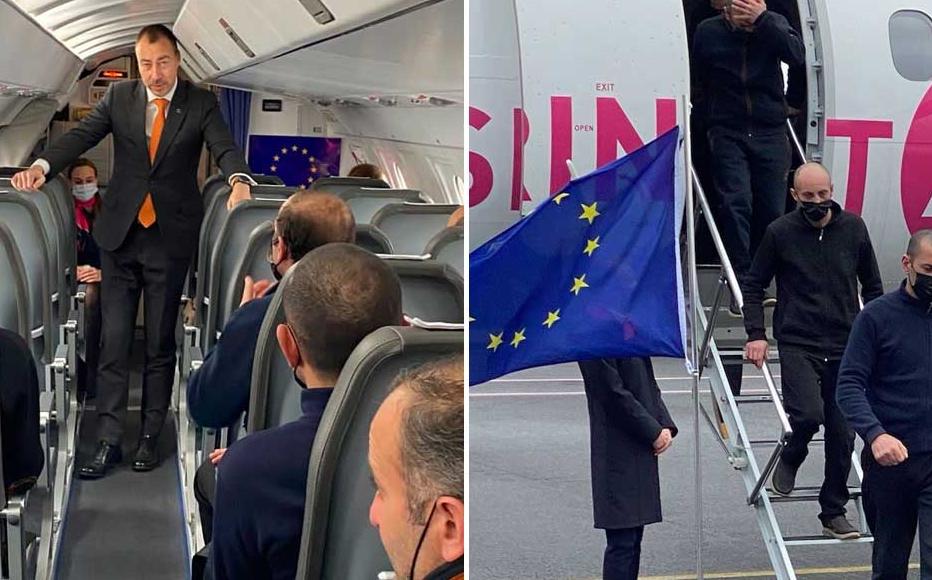 Toivo Klaar, the EU Special Representative for the South Caucasus, overseeing the repatriation of 10 Armenian servicemen in December 2021.
The link has been copied

A Brussels meeting between Armenian prime minister Nikol Pashinyan and the Azerbaijani president Ilham Aliyev on December 15 led to agreements including on restoring railway lines, the return of detainees and handing over minefield maps. Organised by the European Council’s President Charles Michel, the summit also highlighted the European Unions’ interest in supporting peace between the two countries.

However, Toivo Klaar, the EU Special Representative for the South Caucasus, told IWPR that while Brussels was keen to support the process on delimitation and demarcation of the state border, “in the end, it boils down to the political will in Baku and Yerevan”.

IWPR: The trilateral meeting in Brussels was a rare opportunity for the EU to assume the mediator’s mantle in this region. What does Brussels have to show for its efforts?

Klaar: It was the first such meeting in Brussels, but President Michel personally had been quite involved with both leaders since the early summer… the three leaders spent four and-a -half hours together. President Michel also enabled a bilateral meeting between Prime Minister Pashinyan and President Aliyev, which was a welcome sign.

What are the tangible results?

Prior contacts of President Michel with both sides [resulted] in the establishment of a hotline between the ministers of defence, which is used by both sides. We have had the release of prisoners of war [and] detainees and the handing over of maps of minefields. It’s obviously an ongoing process. There have been contacts with Russian officials, involving President Putin with the leadership of both countries, and similarly, with our American colleagues – and frequent contacts entertained by France. All of this is in one way or another contributing to the peace process.

What is the EU’s next objective regarding the border delimitation issue?

We are looking into how we can support the border delimitation process. We are willing to engage… in the process of reducing tensions on the bilateral border, through technical know-how and advice, and of course to the extent that the involved parties want us to be engaged. It will ultimately depend also on the two sides to say where [they] want the EU to be active, and President Michel offered technical assistance in form of an advisory group.

Was an advisory group something either Yerevan or Baku asked for?

Ultimately, in such a process what is required is for both sides to agree on a baseline from which to start working.  I'm not sure that we are quite there yet. We have consistently heard that there is a desire for more EU engagement. The EU is genuinely interested in supporting the emergence of a South Caucasus that is that is peaceful, that is prosperous. We are a genuinely benevolent actor, that was our message. I think that is also recognized in Baku and Yerevan.

There are reports of calls to President Putin by both EC President Michel and French President Macron.  Was it a coordinated effort?

There have been numerous phone calls between President Michel and President Putin. We want to follow up on the desire of the leadership of both countries to have the EU be engaged and we want to make sure that engagement is as productive and as result oriented as possible.  It makes perfect sense to have regular contacts with others who also are strongly involved. But I think it would be too much to say that there is any kind of concentrated effort, division of duties or anything like that between the EU and Russia. In the end, we are pulling largely in the same direction. No contradiction, but no daily coordination either. That’s maybe a bit too much.

Could this be the case of the “dialogue with Russia” that western leaders so desperately want to have?

I think it depends very much on how Russia sees this. We think there is a win-win scenario that would allow everyone to benefit... From our side, this is something that that we can certainly see happening. We are genuinely interested in helping our partners reach a better state.

The terms detainees and prisoners of war have been used interchangeably, but President Aliyev says that people currently in detention “cannot be considered as prisoners of war”. You were on the plane when they were released. What’s the official EU interpretation?

Instead of delving deeper into semantics …we’ve said many times over that all of them should be released. There have been additional transfers of Azerbaijani and Armenian prisoners since the Brussels meetings, this is something we warmly welcome.

Both President Aliyev and PM Pashinyan claim “We want peace and it’s enough of war”. You’ve spoken to both, what is their interpretation of peace?

We are dealing with a very long and bitter history here. Both Armenians and Azerbaijanis can point at moments where they can consider that they have been badly treated, that their people have been killed and driven from their homes. When you keep [this] in mind, it is quite natural that both sides come at things from different perspectives. It will take time to arrive at some common understanding. There has been so much bad blood over so many years… But I think the important thing is, to have a desire to come to turn a page and to move forward in a positive direction. If the leadership in both countries stay true to their commitment, that this is the only way forward, it can be achieved. It will take time to, to come to the point where you say that, yes, we have suffered, but we understand also that you have suffered…. The leaderships have a very important role to play to guide their people.

There is no peace treaty, just a ceasefire. President Aliyev told El Pais that he hoped that “European partners will persuade Armenia”.

We believe that the comprehensive agreement that will address all the outstanding issues is necessary and this is something where we want to support the sides. And there is still also the Minsk Group and its co-chairs, so there are different avenues, there are different possibilities.

Could the EU make this happen? Does Brussels have the clout, the backbone, or even the interest to take it upon itself?

Allow me to turn the question around. Ultimately, any agreement is signed between the leaders of Armenia and Azerbaijan. So, we, as the European Union, can support. Ultimately, however, it is it up to them, to wish to move forward, to make compromises, any sort of comprehensive settlement will have to entail compromises regardless of what the outcome of the 44-day war was. To achieve a durable peace, there should be a just, fair settlement. In the end, it boils down to the political will in Baku and Yerevan.

With regards to the legal status of the Zangezur corridor, President Aliyev demanded reciprocity. Many in Armenia and Azerbaijan interpreted the statement President Michel issued after the meeting as agreeing with that sentiment. Is that the case at hand?

I believe that the wording of the statement was rather referring to railroads. Transit was discussed in detail, and it is quite natural to have a reciprocal approach. As for the legal status, the EU concentrates more on enabling physical connectivity rather than labeling anything.  We have heard that there are plans in both [countries] to invest in making sure that this railway connection is built in the near future. I think that is a very good development.