The Campaign to Silence Turkish Journalists

Prosecutions, house arrest and travel bans among multiple threats deployed by the state.

The Campaign to Silence Turkish Journalists

Prosecutions, house arrest and travel bans among multiple threats deployed by the state. 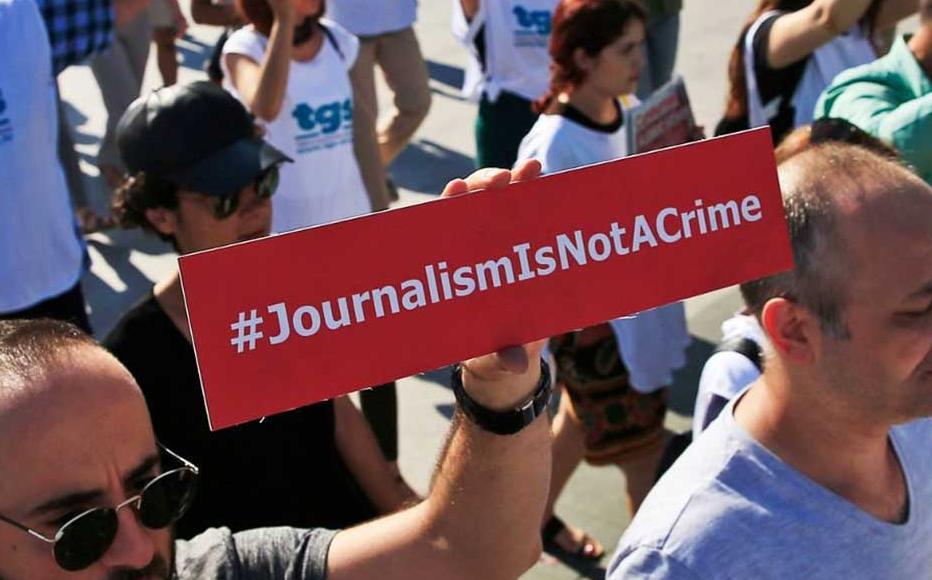 Journalists protesting against frequent arrests of media professionals in Turkey. © TGS
The link has been copied

Given that Turkey is one of the world’s leading jailers of journalists, news that the number of media workers currently in prison has fallen could be taken as a sign of increasing press freedom. Yet although the number of journalists serving prison sentences has dropped from 143 in May 2019 to 43 in April 2021, according to the Journalists’ Union of Turkey (TGS), other serious obstacles have proliferated.

In the first three months of the year, the TGC reports, 220 journalists were sued, 1,238 had their press cards cancelled and 40 were physically attacked. Individual journalists who displease the government have been targeted with house arrest, suspended sentences and international travel bans, while media outlets find their advertising revenues suspended, their websites blocked or are forced off air. The figure of 43 journalists in prison is still relatively high, placing Turkey in the company of China, Saudi Arabia, Vietnam and Syria according to Erol Önderoğlu, of Reporters Without Borders (RSF).

“The decrease in numbers is significant,” Önderoğlu said, “but one shouldn’t conclude that freedoms have increased. Turkey used to be one big jail cell, but the prison is no longer restricted to the confines of four walls.”

"Turkey used to be one big jail cell, but the prison is no longer restricted to the confines of four walls."

Turkey ranks 153 out of 180 countries in this year’s RSF World Press Freedom Index.

In 2020 alone, one newly-launched broadcaster lasted for just 26 days before it was shuttered, while a photographer was left facing 20 years in prison for taking pictures of a police shooting of a young man. Access to particular websites was blocked 450,000 times, according to the monitoring website Turkey Blocks, while the state agency that places government adverts in media outlets suspended revenues a record number of times.

No official figures are kept on the total number of journalists subject to legal restrictions but many media workers say that such measures have become widespread.

In May 2020, Ferhat Akgün, a local reporter in the western city of Tekirdağ, was sentenced to house arrest for entering a Covid-19 hospital without permission, on the grounds that he had violated workplace privacy.

Another journalist, Pınar Gayıp, has been under house arrest since January 2021, after reporting on the conferences of the left-wing Socialist Party of the Oppressed (ESP). Gayıp said that the charges against her - she is alleged to be a member of and to have produced propaganda for a terrorist organisation - relate directly to her work.

“Journalists belong in meeting rooms, at strikes and on university campuses,” she said. Terrorism charges are frequently levelled at journalists, according to TGS lawyer Ülkü Şahin. Şahin, with the problem made worse by an “absurd” judicial system.

“The judiciary has a mentality that disregards the basics of criminal law… and that has forgotten the principle of ‘the benefit of the doubt.’ The motive is to create an atmosphere of fear and intimidation.”

The Kurdish issue remains by far the most controversial. Prosecutions and restrictions can be triggered by coverage from broadcasting a critical speech by a Kurdish politician to reporting on rights violations.

The photojournalist Abdurrahman Gök is facing prosecution for alleged membership of the banned separatist Kurdistan Workers’ Party (PKK), after photographing the fatal shooting of Kemal Kurkut, a young man who police claimed was a PKK suicide bomber, in the southeastern province of Diyarbakir.

“The only organisations I belong to are journalists’ associations,” Gök said. “In fact, the prosecutor, the courts and the judge all know this very well. Unfortunately, these unfounded accusations are the result of reporting on an issue that doesn’t suit the government.”

Four journalists also face prosecution for reporting on an incident in which two Kurdish villagers from the southeastern province of Van were allegedly dropped from a military helicopter, killing one, during an operation against the PKK. The journalists have already served six months in pre-trial detention.

Melis Alphan, a reporter based in Istanbul, was recently charged with conducting propaganda for a terrorist organisation on the basis of a photograph she shared on Instagram in 2015. The photograph, taken during that year’s Newroz celebrations in Diyarbakir, showed people displaying the colours of the Kurdish flag.

“Different versions of the same picture circulated in the media back then, and were shared by millions,” said Alphan, who faces seven and-a-half years in prison. “I think this is about accusing me of a crime to silence me. I’m not a journalist who has worked heavily on the Kurdish issue, my expertise is in women and children’s rights. They went through all of my work to find a single post from six years ago.”

Kurdish-related coverage also prompted the closure of a new independent outlet, Olay TV, in December 2020 after just 26 days on air. Olay was shuttered by its largest shareholder, the businessman and former politician Cavit Çağlar, after it ran a live broadcast of a parliamentary meeting by the pro-Kurdish People’s Democratic Party (HDP). According to a Bloomberg report, the channel’s journalists said that it had come under pressure from government officials unhappy with its output.

“The HDP is the government’s red line,” said Ceren Sözeri, a communications lecturer at Istanbul’s Galatasaray University. Since conflict with the PKK resumed in 2015, the Turkish government has also attempted to suppress the HDP, currently being prosecuted in a trial that may lead to the party being shut down.

“It’s not surprising that a supposedly mainstream broadcaster wasn’t allowed to publicise the HDP group meeting.”

Sözeri added that Tele1, a small private TV channel, was fined last year for broadcasting an advert for the left-wing newspaper Evrensel, in which a girl was shown holding a piece of cloth bearing the colours of the Kurdish flag.

Fines are just one legal avenue by which the media are targeted. Advertising revenue from the BIK is a lifeline for many outlets, and suspensions have become routine. According to media commentator Faruk Bildirici, adverts were withdrawn from various outlets for a total of 803 days in 2020, with the vast majority of suspensions affecting newspapers critical of the government.

This, Bildirici wrote in February, “is really a record. In the 2000s, you couldn’t find even a hundred of these [suspensions] issued annually”.

According to Bildirici, the BIK has transformed from being an agency that ensures media funding is distributed fairly, to one that monitors “moral compliance”.

Yaman Akdeniz, a legal expert at the Freedom of Expression Association’s EngelliWeb (blocked web) project, said that website access bans were also common. The sites of newspapers that serve the Kurdish community or are critical of the government, such as Birgün, Evrensel and Cumhuriyet, were frequently blocked, Akdeniz said, but other outlets like the nationalist OdaTV were also targeted.

“Government officials, public servants and individuals close to the government often file for access bans,” Akdeniz said. “These rulings are handed out without explanation, and without giving outlets a chance to defend themselves.”

While much of the pressure on journalism comes from supporters of the governing Justice and Development Party (AKP), it can come from other sources too. In March, the author Levent Gültekin was attacked in the street by a group of people shortly after criticising the founder of the right-wing Nationalist Movement Party (MHP), the government’s junior coalition partner.

According to TGS president Gökhan Durmuş, however, the driving force is President Recep Tayyip Erdogan and the AKP. Since the failed 2016 coup attempt, Durmuş explained, the government has tried to eliminate critical media, often by accusing journalists of being linked to terrorist organisations. Most Turkish outlets are now owned either by the government or by pro-government business interests.

“We shouldn’t think of the threat to press freedom solely in terms of journalists in prison,” Durmuş said. “Each day, journalists are forced to defend their reporting in court. On top of all that, the government tries to financially restrict outlets they can’t control. The government views any organisation who is not aligned with them as enemies.”